Engineers' Day 2021: It is observed on September 15 in India to commemorate the birth anniversary of one of India's greatest engineers Sir Mokshagundam Visvesvaraya (Sir MV). Let us have a look in detail about the day.

Engineers' Day 2021: Birthday of Bharat Ratna Mokshagundam Visvesvaraya is observed as Engineers' Day in India on September 15. On this occasion, Prime Minister Narendra Modi, Union Home Minister Amit Shah, and various eminent individuals across the country paid their homage to the statesman. 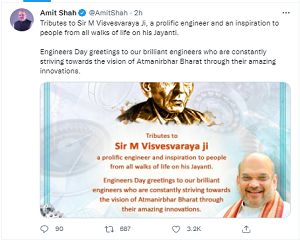 Popularly, Mokshagundam Visvesvaraya was called Sir MV. He was an eminent Indian engineer and statesman who was born in Muddenahalli village in Karnataka’s Kolar district. In 1955, due to his outstanding contribution to the society, Government of India conferred "Bharat Ratna".

He was India’s most prolific civil engineer, dam builder, economist, statesman, and nation-builder.

About Mokshagundam Visvesvaraya and his contributions

He lost his father at the age of 15. His father was a Sanskrit Scholar. He had completed his early education in Chikkaballapur and then he moved to Bangalore for his higher education.

He joined the Science College in Poona to study Engineering and was ranked first in the L.C.E. and the F.C.E. Examinations in 1883.

The Government of Bombay offered him the job of an Assistant Engineer at Nasik. Due to his capability and intelligence, he successfully implemented various projects. He was the brain behind the Krishnaraja Sagar dam in Mysore.

He was known for his simplicity also. In 1912, he was appointed as the Dewan by the Maharaja of Mysore. He worked relentlessly for the overall development of the state. During his tenure, as the Dewan, several new industries came up including Sandal Oil Factory, the Soap Factory, the Metals Factory, the Chrome Tanning Factory, and the Bhadravati Iron and Steel Works.

In 1955, he was honoured with the Bharat Ratna. Engineer's Day is celebrated in India on 15 September to honour the achievements of the most influential engineer from the history of contemporary India.

He contributed significantly to nation-building and his engineer's works spread across the country.

He is also known for his contributions to harnessing water resources. He is also credited with inventing the Block System, the automated doors that close in the conditions of overflow.

2. “At its heart, engineering is about using science to find creative, practical solutions. It is a noble profession.” - Queen Elizabeth II

3. “Science is about knowing; engineering is about doing”. - Henry Petroski, American engineer

4. “Software is a great combination of artistry and engineering.” - Bill Gates

6. “On the sixth day God saw He couldn't do it all, so He created ENGINEERS.” - Lois McMaster Bujold

9. “Architects and engineers are among the most fortunate of men since they build their own monuments with public consent, public approval, and often public money.” - John Prebble

1. Engineers are persons who discover the world by their pen and brain. Happy Engineer’s Day!

2. At its heart, engineering is about using science to find creative, practical solutions. It is a noble profession. Happy Engineer’s Day!

3. Everybody says Engineering is so easy that it is just like walking in a park. But only Engineers know that park is called Jurassic Park. Wishing you Happy Engineer’s Day!

4. Engineering is not only the study of 45 subjects but it is moral studies of intellectual life. Happy Engineer’s Day!

5. This Engineers' Day, let us all rejoice in the innovation and creativity of these exhausting working licensed professionals. Happy Engineer’s Day!

6. I am an engineer. I serve mankind by making dreams come true. Happy Engineer’s Day!

7. You are the one who can create anything with your brains and creativity because you are an engineer...Wishing you a very Happy Engineer's Day!

8. Engineers are the ones who bring technology to make our lives simpler, to bring comfort, to bring ease and today is the day to thank them...Happy Engineer's Day!

9. On the occasion of Engineer's Day, I want to thank the creative, intelligent, and amazing engineer in you who is constantly working hard to give us something new. .Happy Engineer's Day!

10. Without engineers in our lives, it would have been a completely different world to live...Warm wishes on Engineer's Day and a big thank you for giving us all these inventions. Happy Engineer's Day!