Cryosphere is an integral part of the global climate system with important linkages and feedbacks generated through its influence on surface energy and moisture fluxes, clouds, precipitation, hydrology, atmospheric and oceanic circulation. It plays a significant role in the global climate and in climate model response to global changes through these feedback processes. In this article, we are giving the concept of Cryosphere and how does the cryosphere affect global climate, which is very useful for the competitive examinations like UPSC-prelims, SSC, State Services, NDA, CDS, and Railways etc. 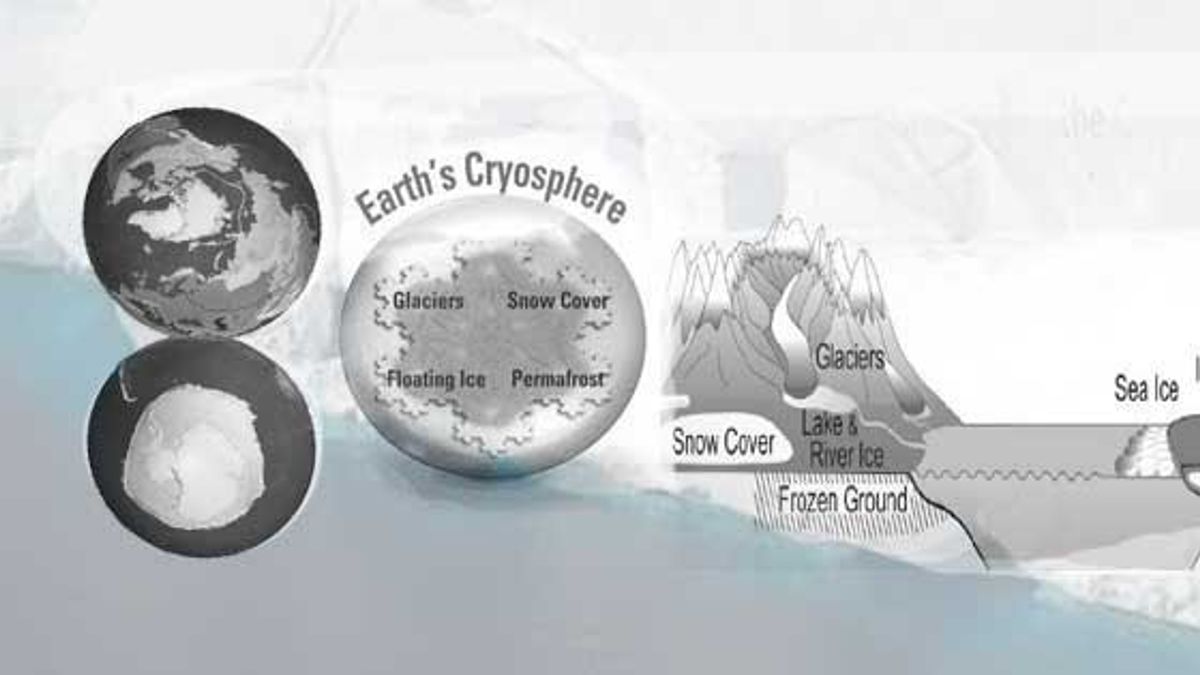 Cryosphere and its affect on global climate

The frozen water is present in different forms (snow, sea ice, lake and river ice, glaciers, ice sheets, icebergs and frozen ground) altogether within the climate system is called as the 'Cryosphere'. Hence, we can say that there is coincide partially or wholly with the hydrosphere.  It is an integral part of the global climate system with important linkages and feedbacks generated through its influence on surface energy and moisture fluxes, clouds, precipitation, hydrology, atmospheric and oceanic circulation. It plays a significant role in the global climate and in climate model response to global changes through these feedback processes.

Before, moving on to the discussion, firstly know that- What is Albedo? Albedo is the measurement of reflectivity of an object. In other words, it is the measure of the diffuse reflection of solar radiation out of the total solar radiation received by an astronomical body. According to the definition, we can say that every object has a different albedo.

How does Earth's Albedo effect the Global Warming?

The state of the cryosphere strongly depends on and interacts with atmospheric conditions, on local to hemispheric spatial scales, and on hourly to glacial-interglacial scales. It has a non-linear response to changes in temperature, due to threshold effects associated with melt. The affects of Cryosphere on global climate are discussed below:

1. The Albedo of snow/ice sheet is high and plays important role in solar radiation because reflect much of the insolation, which helps in cooling of the earth. But due to global warming, some of the snow/ice-sheets are getting melt which resulted multiplier effects. Thus, presence or absence of snow and ice affects the heating and cooling of Earth’s surface. This influences the entire planet’s energy balance.

2.  It influences the surface energy, greenhouse gases and water fluxes. For Example- Changes in Arctic sea ice and snow cover may affect the mid-latitude atmospheric circulation.

3. It plays important role in cooling the air which affects the climate of the regions of Iceland, Greenland, Russia etc.

4. The polar region acts as carbon sink and trapped tonnes of carbon inside its soil. If the frozen water form like snow, sea ice, lake and river ice, glaciers, ice sheets, icebergs and frozen ground melts then it will release in form of methane- a powerful greenhouse gas- which will catalyse the global warming.

5. When seawater is condense into sea ice at Polar region then the surrounding water gets saltier. Saltier water has higher density; it sinks and initiates thermohaline circulation patterns across the oceans of the world. These Ocean currents act like a conveyer belt, transporting warm water from the equator toward the poles and cold water from the poles back to the tropics. Thus, currents regulate global climate. Some of these currents affect rain and drought situation via El-Nino La-Nina effect.

6. If the frozen form of water melts, then the volume of water in the oceans will be affected. So any changes in the water cycle, affects global energy / heat budget, and thereby global climate.

The Intergovernmental Panel on Climate Change (IPCC) in their 5th Assessment Report states that there has been a continued net loss of ice from the cryosphere, although there are significant differences in the rate of loss between Cryosphere components and regions.

Hence, we can say that Cryosphere has direct and indirect bearing on the global climate. Therefore, if we want to protect the biosphere then we must protect the Cryosphere.