Fiscal deficit, Revenue receipts, revised estimates in budget and revenue budget are some important terms used in the Union budget every year. But many people don't understand the meaning of these tough words. In this article we have explained these budget terminology.

Under Article 112 of the constitution, a statement of estimated receipts and expenditure called the 'Annual Financial Statement'. The Finance Minister of India presents the annual budget every year in the parliament.

There are so many terms used during the full budget presentation which are not known to many peoples. So we are explaining a bit about these terms for the convenience of the general public and students.

Under Article 112 of the constitution, a statement of estimated receipts and expenditure, called the 'Annual Financial Statement', has to be placed before Parliament for each financial year.

This Statement is the main budget document. It is an estimate of the Government's revenue and expenditure at the end of a fiscal year, which runs from April 1 to March 31.

A Union Budget is the most comprehensive report of the Government's finances, in which revenues from all sources and outlays to all activities are consolidated. The budget also contains estimates of the Government's accounts for the next fiscal, called budgeted estimates.

Capital payments refer to capital expenditures on construction of capital projects and acquisition of assets like land, buildings machinery, and equipment.

It also includes investments in shares, and loans and advances granted by the Central Government to State Governments, Government companies, corporations, and other parties. 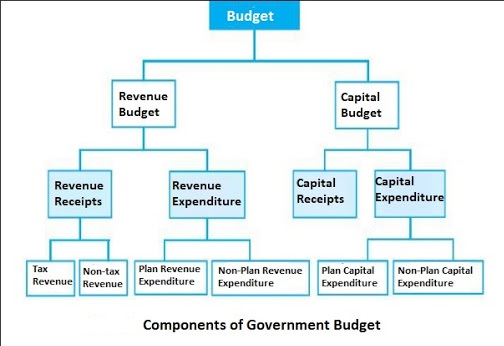 The non-tax revenue sources include interest on loans, dividend on investments etc.

Revenue expenditure is the expenditure incurred on the day-to-day running of the Government and its various departments, and for services that it provides.

It also includes interest on its borrowings, subsidies and grants given to State Governments and other parties.

This expenditure does not result in the creation of assets. In case the difference between revenue receipts and revenue expenditure is negative, there is a revenue deficit.

It shows the shortfall of the Government's current receipts over current expenditure. If the capital expenditure and capital receipts are taken into account too, there will be a gap between the receipts and expenditure in a year. This gap constitutes the overall budgetary deficit, and it is covered by issuing 91-day Treasury Bills, mostly held by the Reserve Bank.

Revenue surplus is the excess of revenue receipts over revenue expenditure.

This is the gap between the Government's total spending and the sum of its revenue receipts and non-debt capital receipts.

It represents the total amount of borrowed funds required by the Government to completely meet its expenditure. The gap is bridged through additional borrowing from the Reserve Bank of India, issuing Government securities etc. The fiscal deficit is one of the major contributors to inflation.

The Government proposals for the levy of new taxes, alterations in the present tax structure, or continuance of the current tax structure are placed before the Parliament in this bill. The bill contains amendments proposed to direct and indirect taxes.

Direct taxes are levied on the incomes of individuals and corporations. For example, income tax, corporate tax, etc. Indirect taxes are paid by consumers when they buy goods and services. These include excise duty, customs duty etc.

8. Central plan outlay: It refers to the allocation of monetary resources among the different sectors in the economy and the ministries of the Government.

The funds that the Government thus receives from its bank-like operations are kept in the public account, from which the related disbursements are made.

These funds do not belong to the Government and have to be paid back to the persons and authorities who have deposited them.

10. Ad-valorem duties: These are the duties determined as a certain percentage of the price of products.

12. Budget Estimates: It is an estimate of fiscal and revenue deficits for the year. The term is associated with the estimates of the Centre's spending during the financial year and the income received through taxes.

13. Capital Receipt: Loans raised by the Centre from the market. Government borrowings from the Reserve Bank and other parties, the sale of Treasury Bills, and loans received from foreign governments form a part of capital receipt.

Other items that also fall under this category include recovery of loans granted by the Centre to State Governments and proceeds from disinvestment of Government stake in public sector undertakings.

14. Consolidated Fund: Under this, the Government pools all its funds together.

It includes all Government revenues, loans raised, and recoveries of loans granted.

All expenditure of the Government is incurred from the consolidated fund and no amount can be withdrawn from the fund without authorisation of the Parliament.

15. Contingency Fund: This is a fund used for meeting emergencies where the Government cannot wait for authorisation of the Parliament. The Government subsequently obtains Parliamentary approval for the expenditure. The amount spent from the contingency fund is returned to the fund later.

16. Monetary Policy: This comprises actions taken by the central bank to regulate the level of money of liquidity in the economy, or change the interest rates.