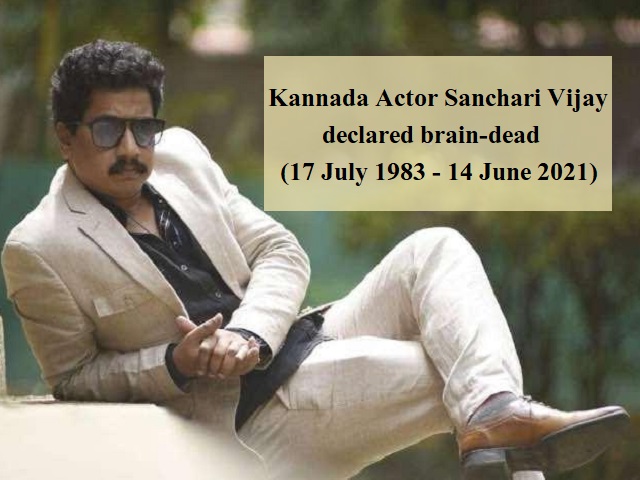 After a tragic road accident in Bengaluru, National Award-winning Kannada actor Sanchari Vijay declared brain dead by the doctors on June 14, 2021. The death news was confirmed by Kichcha Sudeepa. His family has decided to donate his organs.

Very very disheartening to accept that Sanchari Vijay breathed his last.
Met him couple of times just bfr this lockdown,,,, all excited about his nxt film,, tats due for release.
Very sad.
Deepest Condolences to his family and friends.
RIP 🙏🏼

On 12 June 2021, Sanchari Vijay was riding pillion with his friend Naveen at 11:45 p.m. amid the COVID-induced lockdown to fetch medicines. The bike skidded and hit a light pole in JP Nagar, Bengaluru. The actor sustained severe injuries in the right portion of the brain from the accident while his friend Naveen fractured his leg.

Vijay was operated on at the Apollo hospital in the city. An emergency brain surgery was performed on him to remove the blood clot, but he could not be saved. A case has been registered against Naveen.

“Doctors have informed us that his brain stem has failed and the possibilities of him reviving are very slim. As you all know, he always worked for the betterment of society. He even worked round the clock on the relief efforts during the Covid-19 pandemic. So, we have decided to donate his organs. We believe that it will bring him peace. He will continue to help society even in death. Thanks to everyone who tried to do their best to help him,” Vijay’s brother said.

Sanchari Vijay was born on 17 July 1983 in Panchanahalli, Kadur, Chikmagalur, Karnataka, India. He started his career as a theatre artist from Sanchari. His debut film was Rangappa Hogbinta in 2011. He received recognition for his performance in Dasavla. He played as a lead actor in Harivu which went on to win the National Film Awards for the Best Feature Film in the Kannada language.

He bagged National Film Award for Best Actor for his portrayal of a transgender in Naanu Avanalla...Avalu. With this, he became the third actor to win the coveted award for performing in a Kannada film after M. V. Vasudeva Rao and Charuhasan.