Martyr's Day is observed in India on several dates. On 30 January, Martyrs' Day is commemorated to honour Mahatma Gandhi. The day is also known as Shaheed Diwas.

Mahatma Gandhi, the Father of Nation, was assassinated at Gandhi Smriti in the Birla House on 30 January. Also, on 23rd March, Bhagat Singh, Shivaram Rajguru, and Sukhdev Thapar were hanged to death by the British.

We invite you to join us for a virtual narration of 'Satyagraha - The Pathway to Global Peace’
Remembering Mahatma Gandhi on his 74th Martyrs' Day by Dr. Shobhana Radhakrishnan.
Livestreaming on our Facebook page on 30th Jan. 2022 at 1000 hrs.https://t.co/9FAcTeWNNE pic.twitter.com/5V6aVVoddm

WB Guv Shri Jagdeep Dhankhar will pay floral tributes to Father of the Nation Mahatma Gandhi- Apostle of Peace and Non-Violence #PunyaThithi today at 9.30 am at Gandhi Ghat, Barrackpore and at 11.00 am at Gandhi Statue at Mayo Road, Kolkata.

Mohandas Karamchand Gandhi or Mahatma Gandhi was a renowned freedom activist and an authoritative or powerful political leader who had played an important role in India's struggle for Independence against the British rule of India. He was also considered as the father of the country. No doubt, he had also improved the lives of India's poor people. His birthday is celebrated every year as Gandhi Jayanti. His ideology of truth and non-violence influenced many and was also adopted by Martin Luther and Nelson Mandela for their struggle movement.

On 30 January Mahatma Gandhi was assassinated by Nathuram Godse and so, this day is observed as Martyr's Day or Shaheed Diwas.

In South Africa for about 20 years, Mahatma Gandhi protested against injustices and racial discrimination using the non-violent method of protests. His simplistic lifestyle won him, admirers, both in India and the outside world. He was popularly known as Bapu (Father).

"The best way to find yourself is to lose yourself in the service of others." - Mahatma Gandhi

He was born on 2 October, 1869 in Porbandar, Gujarat. His father’s name was Karamchand Gandhi and his mother’s name was Putlibai. At the age of 13, Mahatma Gandhi was married to Kasturba which is an arranged marriage. They had four sons namely Harilal, Manilal, Ramdas and Devdas. She supported all the endeavors of her husband until her death in 1944.

His father was Dewan or Chief Minister of Porbandar, the capital of a small principality in Western British India (Now Gujarat State). Mahatma Gandhi was the son of his father's fourth wife Putlibai, who belonged to an affluent Vaishnava family. Let us tell you that in his earlier days, he was deeply influenced by the stories of Shravana and Harishchandra as they reflected the importance of truth.

READ| Why is Gandhi Jayanti celebrated on 2nd October?

When Gandhi was 9 years old he went to a local school at Rajkot and studied the basics of arithmetic, history, geography, and languages. At the age of 11, he went to a high school in Rajkot. Because of his wedding, at least about one year, his studies were disturbed and later he joined and completed his schooling. He joined Samaldas college in Bhavnagar in 1888 at Gujarat. Later, one of his family friends Mavji Dave Joshi pursued further studies i.e. law in London. Gandhiji was not satisfied with his studies at Samaldas College and so he became excited by the London proposal and managed to convince his mother and wife that he will not touch non-veg, wine, or women.

In the year 1888, Mahatma Gandhi left for London to study law. Thereafter 10 days of arrival, he joined the Inner Temple, one of the four London law colleges, and studied and practiced law. In London, he also joined a Vegetarian Society and was introduced to Bhagavad Gita by some of his vegetarian friends. Later, Bhagavad Gita set an impression and influenced his life. 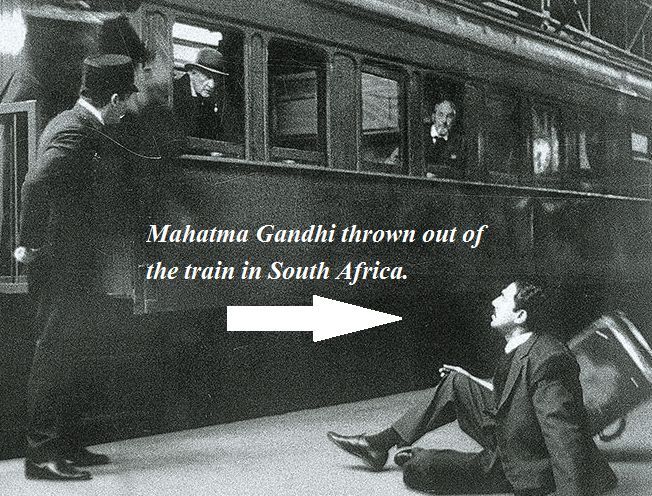 In May, 1893 he went to South Africa to work as a lawyer. There he had the first-hand experience of racial discrimination when he was thrown out of the first-class apartment of the train despite holding the first-class ticket because it was reserved for white people only and no Indian or black was allowed to travel in the first class. This incident had a serious effect on him and he decided to protest against racial discrimination. He further observed that this type of incident was quite common against his fellow Indians who were derogatorily referred to as coolies.

READ| When and Why British first landed on Indian Territory

On 22 May, 1894 Gandhi established the Natal Indian Congress (NIC) and worked hard to improve the rights of Indians in South Africa. In a short period, Gandhi became a leader of the Indian community in South Africa. Tirukkural ancient Indian literature, originally written in Tamil and later translated into various languages. Gandhiji was also influenced by this ancient book. He was influenced by the idea of Satyagraha which is a devotion of truth and in 1906 implemented a non-violent protest. He returned to India in 1915, after spending 21 years of his life in South Africa, and no doubt, there he fought for civil rights and at this time he was transformed into a new person.

In 1915, Gandhiji returned to India permanently and joined the Indian National Congress with Gopal Krishna Gokhale as his mentor.

Gandhi's first major achievement was in 1918 when he led the Champaran and Kheda agitations of Bihar and Gujarat. He also led Non-Cooperation Movement, Civil Disobedience Movement, Swaraj, and Quit-India movement against the British government. 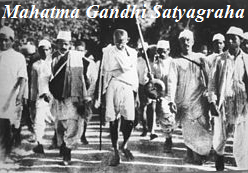 Gandhi identified his overall method of non-violent action as Satyagraha. Gandhiji's Satyagraha influenced eminent personalities such as Nelson Mandela and Martin Luther in their struggle for freedom, equality, and social justice. Mahatma Gandhi's Satyagraha was based on true principles and non-violence.

Mohandas Karamchand Gandhi was assassinated on 30 January 1948 by Nathuram Godse. Godse was a Hindu nationalist and a member of the Hindu Mahasabha. He accused Gandhi of favouring Pakistan and was opposed to the doctrine of non-violence.

"You must be the change you wish to see in the World." - Mahatma Gandhi

Gandhi was a prolific writer. Some of his literary works are as follows:

• He edited several newspapers which included Harijan in Gujarati, in Hindi and the English language; Indian Opinion, Young India, in English, and Navajivan, a Gujarati monthly.

• Gandhi also wrote his autobiography, The Story of My Experiments with Truth.

• In 2011, Time magazine named Gandhi as one of the top 25 political icons of all time.

• He did not receive the Nobel Peace Prize despite being nominated five times between 1937 and 1948.

• The Government of India institutionalized the annual Gandhi Peace Prize to distinguished social workers, world leaders, and citizens. Nelson Mandela, the leader of South Africa's struggle against apartheid was a recipient of the award.

"Happiness is when what you think, what you say, and what you do are in harmony." - Mahatma Gandhi

Therefore, Mahatma Gandhi would be remembered forever as he spread the message of non-violence, truth, faith in God, and also he fought for India's Independence. His methods inspired various leaders, youth not only in India but also out of India. In Indian history, he is considered as a most prominent personality and as the simplest person who wears dhoti. He spread the message of swaraj and taught Indians how to become independent.

"No culture can live, if it attempts to be exclusive." - Mahatma Gandhi

"Faith is not something to grasp, it is a state to grow into."  - Mahatma Gandhi