Why are mitochondria known as the powerhouse of the cell?

Check out the structure and function of mitochondria. Why are mitochondria known as the powerhouse of the cell?

A cell is a structural and functional unit of life. It consists of Plasma Membrane, Cell Wall, Nucleus, Cytoplasm, Ribosomes, Golgi bodies, Mitochondria, Lysosomes, and Plastids etc. Here, we will study mitochondria, its structure, and function.

Mitochondria is present in the cytoplasm of all eukaryotic cells. They are membrane-bound organelles and produce adenosine triphosphate (ATP) which is the main energy molecule used by the cell.

- Mitochondria are found in both plant and animal cells.

- They are double-membraned and rod-shaped in structure.

- The structure consists of an outer membrane, an inner membrane and a jelly-like material known as a matrix. 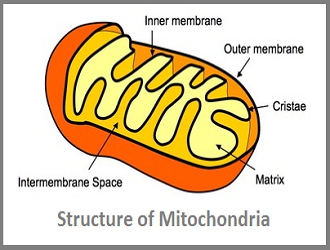 Outer membrane: Through this membrane, small molecules can pass freely. It covers the surface of the mitochondria. It consists of a large number of special proteins called porins which form channels that allow proteins to cross. The outer membrane of mitochondria also hosts various enzymes with a wide variety of functions.

The Intermembrane is the space between the inner and outer membranes.

Inner membrane: It is also made up of proteins that have various roles. As it does not consist of porins and so, it is impermeable to most molecules. Molecules can only cross the inner membrane in special membrane transporters. In the inner membrane, only ATP is generated.

Matrix: The space which is present in the inner membrane is known as the matrix. It contains various enzymes, which are important in the production of ATP. Here, mitochondrial DNA is housed.

So, we can say that mitochondria are freely permeable to ions, nutrient molecules, energy molecules like the ADP, and ATP molecules.

Cristae:  Folds present in the inner membrane are known as cristae. Due to cristae, the surface area of the membrane is increased and so, space available for chemical reactions is also increased.

The main function of the mitochondria is to produce energy through the process of oxidative phosphorylation.

- It regulates the metabolic activity of the cell.

- Inside the liver cells, it helps in detoxifying ammonia.

- It promotes cell multiplication and the growth of new cells.

- It also plays a significant role in apoptosis or programmed cell death.

- It is also responsible for certain parts of the blood and several hormones including testosterone and oestrogen.

- It also maintains an adequate concentration of calcium ions inside the compartments of the cell.

- It is also involved in several cellular activities such as differentiation, cell signalling, cell senescence, controls the growth of the cell and cell cycle.

Why are mitochondria known as the powerhouse of the cell?

Mitochondria are referred to as the powerhouse of the cell or energy factories because they help in extracting energy from food via cellular respiration. The energy is released in the form of adenosine triphosphate (ATP). It is also called the energy currency of the cell.

During digestion, food breaks down and products from digestion of food find their way into the cell then a series of chemical reactions occur in the cytoplasm. This permits some of the energy locked up in these products to be released and incorporated into the universal energy supplier in cells called ATP.

From this process, remaining molecular fragments then enter the mitochondria and there they are finally converted into carbon dioxide and water. In these fragments, the energy locked up is incorporated into more ATP.

The ATP produced can be used by the cell to supply energy required to function.

During the breakdown of glucose, the chemical reaction that occurs is:

When the functioning of mitochondria is stopped then the cell is starved of energy. Therefore, depending on the type of cell, symptoms may vary. In general, cells that require the largest amounts of energy like cardiac muscle cells and nerves, are affected the most by faulty mitochondria.

If in a disease, different symptoms are generated but due to the same mutation then it is referred to as genocopies.

In converse, diseases that have the same symptoms but are caused due to mutations in different genes are known as phenocopies.

- Loss of muscle coordination and weakness

Conditions that are involved in some level of mitochondrial dysfunction are:

So, we can say that, any sort of irregularities that occur in the function of mitochondria affect the health of humans, but often, it is difficult to identify because symptoms vary from person to person. In some cases, disorders of the mitochondria can be quite severe, and it can cause an organ to fail.