What are Broad Gauge, Metre Gauge and Narrow Gauge in Indian Railway?

Indian Railways plays an important role in everybody's life. While travelling have you noticed that some tracks of the railways are wide, some are wider and some are not much wide. Let us study through this article why there is a difference between these tracks and what they are known as. 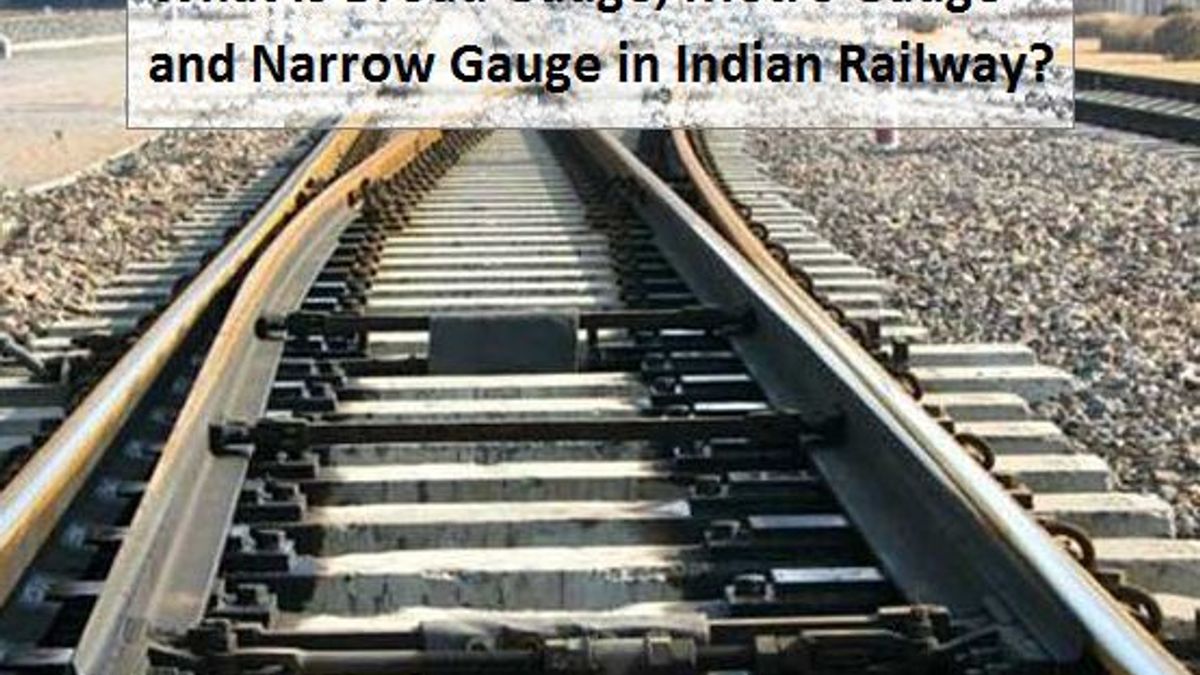 What are Broad Gauge, Metre Gauge and Narrow Gauge in Indian Railway?

We know that Indian Railway is the world's second-largest rail network which transports almost 2.5 crore passengers daily. Most often people travel through it. It can be easily accessed from anywhere. It is the best and comfortable medium of transportation. But have you noticed that some tracks of the Indian Railway are wide and some are not? Why is it so? What is the reason behind it?

What is Rail Gauge?

Broad gauge is also called wide gauge or large line. The distance between the two tracks in these railway gauges is 1676 mm (5 ft 6 in). It would not be wrong to say that any gauge, wider than standard gauge or 1,435 mm (4 ft 8½ inches), is called broad gauge. The first railway line built in India was a broad gauge line from Bore Bunder (now Chhatrapati Shivaji Terminus) to Thane in 1853. Broad gauge railway is also used on ports for crane etc. This gives better stability and they are even better than thinner gauges.

The distance between the two tracks in this railway gauge is 1435 mm (4 ft 8½ in). In India, standard gauge is used only for urban rail transit systems like Metro, Monorail and Tram. Till 2010, the only standard gauge line in India was the Kolkata (Calcutta) tram system. All metro lines coming in urban areas will be made only in the standard gauge because it is easy to get rolling stock for the standard gauge as compared to the Indian gauge. By 2016, the lines that are in operation are Delhi Metro, Rapid Metro Rail Gurgaon, Bangalore Metro and Mumbai Metro. All these are operated separately from Indian Railways. 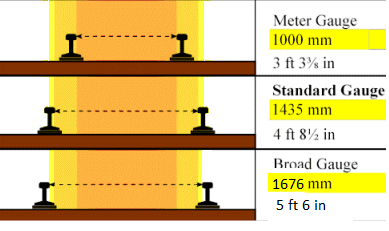 The distance between the two tracks is 1,000 mm (3 ft 3 3/8 in). The metre gauge lines were made to reduce the cost. All meter gauge lines except the Nilgiri Mountain Railway which is a legacy run on a meter gauge in India will be converted into broad gauge under project Unigauge.

The small gauge is called a Narrow gauge or a small line. The narrow-gauge railway is the railway track, in which distance between two tracks is 2 ft 6 in (762 mm) and 2 ft (610 mm). In 2015, there was a 1,500 km narrow gauge rail route, which is considered to be about 2% of the total Indian rail network. As the country is developing, small line services are expected to be completed by 2018. Now the small lines are being converted into big lines. Trains with small bogies now will no longer be able to see much. The Darjeeling Mountain Railway has declared UNESCO World Heritage on 24 July, 2008. Kalka Shimla Railway is also very popular.

- Traffic conditions: If the traffic intensity is likely to be high on the track, then the broad gauge will be appropriate instead of the standard gauge.

- Poor areas development: Narrow gauges have been installed in some parts of the world to develop a poor area and thus helpful in linking the poor area with the outside world.

- Cost of track: The cost of the railway track is directly proportional to the width of its gauge. If available funds are not enough to make standard gauge and there is no railway line in the area, then the metre gauge or narrow gauge is preferred.

- Speed of the train:

The speed of a train is a function of the diameter of the wheel, which in turn is limited by the gauge.

The wheel's diameter is usually 0.75 times the width of the gauge and thus, the speed of the train is almost proportional to the gauge.

If higher speeds are to be achieved then the broad gauge track is given the priority instead of metre gauge or narrow gauge track.

So, now you may have understood about Broad Gauge, Narrow Gauge, Metre Gauge and Standard Gauge.

Features of Smart Coach in the Indian Railways