What Is The Conflict Between North and South Korea? Explained.

The South Korean capital, Seoul, has issued an air raid alarm, warning its citizens to evacuate as North Korea fired missiles into the ocean.

Saumya Updated: Nov 2, 2022 15:06 IST
What Is The Conflict Between North and South Korea? Explained.

What is happening between North and South Korea?

North Korea launched ten missiles, one of which touched down for the first time on South Korean soil since the Korean War. Three short-range missiles were launched into the East Sea, while a fourth one fell in the water 26 kilometers south of the Northern Limit Line, a line in the water that divides the two Koreas and is a source of disagreement.

In retaliation, South Korea launched three of its own air-to-surface missiles into the water north of the Northern Limit Line.

Following the launch, South Korea issued an air raid warning for its eastern island, Ulleungdo, and urged its citizens to "evacuate to the nearest underground shelter."

South Korea also stopped several flight routes across the East Sea, commonly known as the Sea of Japan, in order to guarantee the safety of its passengers on the routes to the United States and Japan. 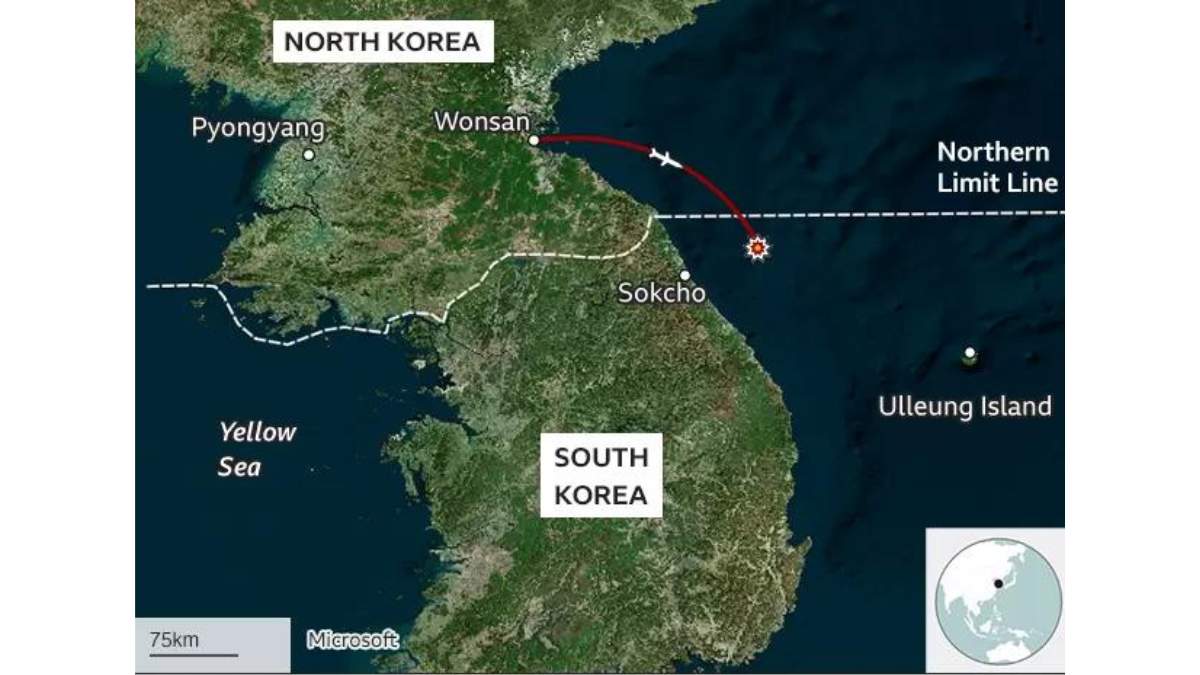 The Northern Limit Line, the unofficial maritime boundary between the two nations, was breached by one short-range ballistic missile, prompting an unusual warning for Ulleungdo people to take refuge in bunkers.

The launches occurred hours after North Korea escalated its hostile tactics, threatening to deploy nuclear weapons to “pay the most horrible price in history” on the US and South Korea if their joint military drills continued.

South Korea counter-attacked three hours after North Korea fired a missile that touched down less than 60 kilometers (37 miles) off the coast of the South Korean city of Sokcho.

The military said it was the "first time since the peninsula was divided" that a North Korean missile had come this near to the South's territorial waters after hostilities in the Korean War came to an end in 1953.

Continue reading to find out how and why the Korean peninsula was split into two nations.

What Is The Conflict Between North and South Korea?

The division of the Korean peninsula began after World War II when Japan was defeated.

Korea was a Japanese colony from 1910 to 1945. The Allied leaders came to an agreement that Korea would be freed from Japanese authority but placed under international trusteeship until it was determined that the people of Korea were prepared for self-government.

And after the Second World War, the US and Soviet occupying troops decided to split the Korean peninsula in half along the 38th parallel.

Kim Il-sung, the first of three generations of the Kim family to rule North Korea founded the nation in 1948. The same year, the US named South Korea a republic.

Hostilities arose between the two countries in 1950, when North Korea, under its communist agenda, tried to annex South Korea in an attempt to unite the two into one independent nation.

Three years after the war, Korean Armistice Agreement was formally signed. The agreement signed by both nations saw the construction of the Korean Demilitarized Zone (DMZ), a 249 kilometers long strip of territory, to act as a border between the two countries.

Nearly 70 years after the Korean War ended, the DMZ, centered on the "truce hamlet" of Panmunjom, still divides the two nations along these same lines.

Today, for the first time since the Korean war, the two nations have fired missiles off each other’s coasts.

Why did the Korean War start?

in 1950, North Korea started the war, wanting to annex South Korea in order to reunite Korea under its communist rule.

Who won the war between the North and the South Korea?

no one. the korean war that ended in 1953 reached a stalemate.

Why are North Korea and South Korea fighting?

Why are North and South Korea at war? The Democratic People's Republic of Korea (North Korea) and the Republic of Korea (South Korea) contend to be the only two legitimate governments in Korean peninsula, which has resulted in the ongoing conflict.
Get the latest General Knowledge and Current Affairs from all over India and world for all competitive exams.