At present, the Indian economy is passing through a tough time. But it is expected that our economy will recover from this slowdown very soon.

As per the latest report of 'World Economic League Table 2020'; India has overtaken both France and the UK to become the world's 5th largest economy in 2019. 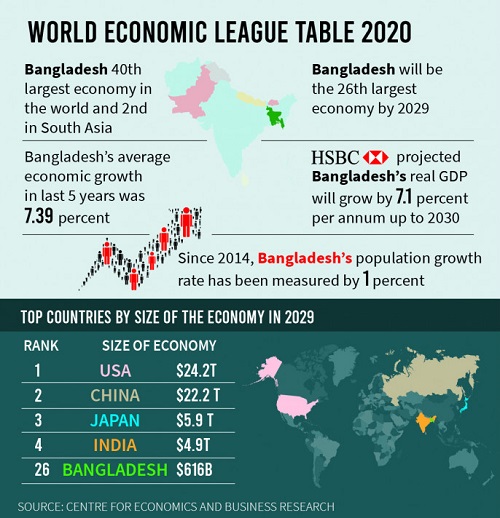 1. Agriculture & Allied Sector: This sector includes forestry and fishing also. This sector is also known as the primary sector of the economy. At the time of Indian independence, this sector had the biggest share in the Gross Domestic Product of India. But year by year its contribution goes on declining and currently, it contributes only 17% of Indian GDP at current prices. It is worth to mention that the agriculture sector provides jobs to around 53% population of India.

2. Industry Sector: This sector includes 'Mining & quarrying', Manufacturing (Registered & Unregistered), Gas, Electricity, Construction, and Water supply. This is also known as the secondary sector of the economy. Currently, it is contributing around 29.6 % of the Indian GDP (at current prices) in 2018-19.

3. Services Sector: Services sector includes 'Financial, real estate & professional services, Public Administration, defence and other services, trade, hotels, transport, communication and services related to broadcasting. This sector is also known as the tertiary sector of the economy. Currently, this sector is the backbone of the Indian economy and contributing around 54.3% of the Indian GDP in 2018-19.

Let's have a look at all three sectors of the Indian economy in the FY 2017-18 at the current price.

The share of various sectors in Gross Value Added (GVA) during last three years is given in the table below. (updated upto Dec. 2018):source:-PIB

The above table shows that the service sector is the backbone of the Indian economy; contributing the most in Indian GDP followed by the industrial sector. But the declining percentage of the agriculture and allied sector in the Indian GDP is the cause of concern for the policymakers because this sector still provides livelihood to around 53% population of the country but its contribution to the economy is declining year by year.