World Tuna Day 2020: It is observed on 2 May and is established by the United Nations (UN) to raise awareness about the importance of tuna fish. The day was first time observed in 2017. Let us read in detail about World Tuna Day.

World Tuna Day 2020:Tuna is a fish and are economically important to both developed and developing countries. They are a significant source of food and has amazing qualities due to which they are threatened by overwhelming demand. According to UN, approximately 7 million tonnes of tuna and tuna-like species are landed yearly.

In December 2016 the United Nations General Assembly officially voted to observe the Day in its resolution 71/124. No doubt this movement will underline the importance of conservation management to ensure that they have systems, equipment to prevent stocks of tuna from crashing.

There are several countries that depend upon tuna resources for food security and nutrition, economic development, employment, livelihood, culture etc. On 2 May, 2017 the first World Tuna Day was recognised. 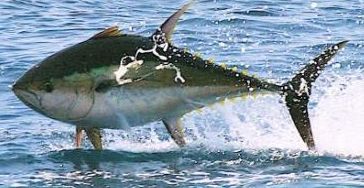 Tuna is a large fish. They are remarkable and impressive wild animals. The Atlantic bluefin can reach ten feet in length and weigh as much as 2000 pounds. To reduce drag and accelerate the swimming speed, tuna is able to change the position of its dorsal and pectoral fins. Tuna can swim near the surface or can dive to the depth of 3000 feet while it searches for food. They can swim as fast as 43 miles per hour. The average life span of bluefin tuna is between 15 and 30 years in the wild. Dorsal side of the tuna's body is dark blue and it blends with the ocean floor when observed from the air. Belly of tuna is silver-white and it blends with the surface of the ocean when observed from below.

Tuna are species of fish and are economically very important. It is also a significant source of food. Approximately 40 tuna and tuna-like species occur in the Atlantic, Indian, Pacific Ocean and the Mediterranean Sea. Such type of remarkable fish can jump high out of the water, they are warm-blooded. For the protection from sharks, they also team up with the Dolphins.

Do you know that these fishes are threatened due to the increase in main products drive the production of tuna that is traditional canned tuna and sashimi or sushi? In terms of species utilised, quality requirements and production systems, these products demonstrate relevant differences. In the canned market, light meat species that is skipjack and yellowfin are dominant whereas, in the sushi and sashimi market, the fatty tuna of bluefin and other red meat species are preferred.

Do you know that approx 7 million tonnes of tuna-like species are landed yearly? Migratory tuna species account for 20 per cent of the value of marine capture fisheries and around 8 per cent of all globally traded seafood that is why World Tuna Day is observed by United Nations to recognise the importance of tuna species around the world.

Therefore, we can say that World Tuna Day is observed on 2 May every year to highlight the importance of tuna fish to the marine ecosystem and the global economy.

When and Why World Earth Day is celebrated?