10 Oldest Central Bank in the world

Central bank of the country has a crucial role to maintain economic stability in the country. Let’s have a look some of the oldest central bank in the world. 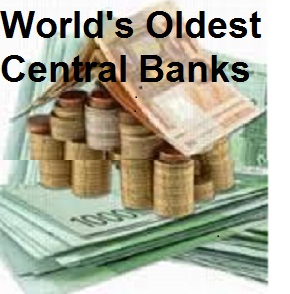 In 1995, following a referendum, Finland became a member of the European Union. The Bank is also a part of the Eurosystem, which is responsible for monetary policy and other central bank tasks in the euro area and administers the use of the world’s second largest currency – the euro.  The bank’s main objective is “keeping the financial system stable and secure while fostering and easing the flow of cash.”

7. De Nederlandsche Bank (DNB): The central Bank of Netherland, De Nederlandsche Bank (DNB) is responsible to safeguard financial stability in the country. The bank   was established in 1814 by a charter issued by King William I. Now, DNB operates under the provisions of the 1998 Bank Act, the Financial Supervision Act, the Dutch Civil Code, DNB's articles of association and the rules of procedure. It is an independent public body with a national mandate for supervision, resolution and the deposit guarantee scheme.

The bank is part of the European System of Central Banks (ESCB) and the Eurosystem, and cooperates with its European counterparts in the areas of monetary policy, foreign exchange operations etc.

8. Norges Bank: Norges Bank is Norway's central bank, founded in the year 1816. Norges Bank's activities are regulated by the Act of 24 May 1985 relating to Norges Bank and the Monetary System etc. The bank is accountable to promote economic stability in the country.

9. Oesterreichische Nationalbank (OeNB): The central bank of the Republic of Austria named the Oesterreichische Nationalbank (OeNB) was founded in 1816. Now the bank is an integral part of the European System of Central Banks (ESCB). The OeNB contributes, in the public interest, to monetary and economic policy decision-making in Austria and the euro area.

The bank's three main objectives are to contribute to ensuring stable prices, safe payments and a stable financial system.