SSC has released its notification for recruiting Constables in Delhi Police and several questions are arising regarding this context. Age Relaxation is considered to be the one of them. Before clarifying it, we want to disclose the minimum eligibility criteria for the same.

SSC has released its notification for recruiting Constables in Delhi Police and several questions are arising regarding this context. Age Relaxation is considered to be the one of them. Before clarifying it, we want to disclose the minimum eligibility criteria for the same.

a. Educational Qualification: - 10+2 from a recognized Board/University which is further relaxed up to 11th for Bandsmen, buglers, mounted constables, drivers, dispatch riders, etc. of Delhi Police and sons/daughters of Delhi Police Personnel & Multi Tasking Staff (formerly Class-IV employees) of Delhi Police only either in service, retired or deceased.

In the following table, categories and their respective age relaxation are mentioned. 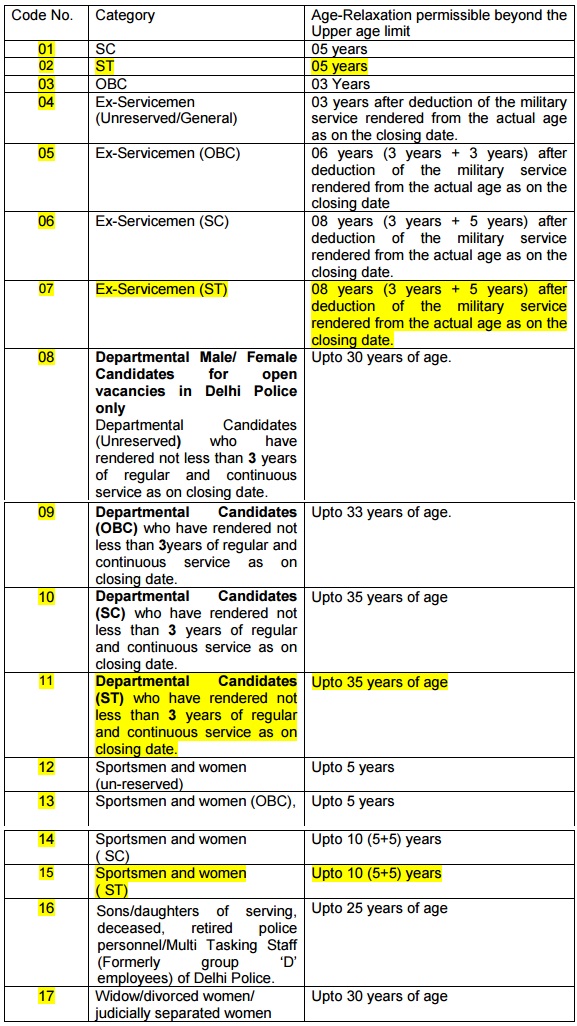 In the above tabulated data, Ex-service man and OBC category is mentioned which is further clarified by the SSC.  You can find it just below in brief.

a. Ex- servicemen: - “An ex-serviceman” means a person, who has served in any rank whether as a Combatant or non-combatant in the Regular Army, Navy and Air Force of the Indian Union and who retired from such service after earning his/her pension;
Or,
Whose discharge book has the endorsement of Ex-Servicemen;
Or,
Who has been released from such service on medical grounds attributable to military service;
Or,
Circumstances beyond his control and awarded medical or other disability pension;
Or,
Who has been released, otherwise than on his own request, from such service as a result of reduction in establishment;
Or,
who has been released from such service after completing the specific period of engagements, otherwise than at his own request or by way of dismissal or discharge on account of misconduct or inefficiency, and has been given a gratuity; and includes personnel of the Territorial Army of the following categories, namely:-

a) Pension holders for continuous embodied service
b) Persons with disability attributable to military service; and
c) Gallantry award winners.

*** The Territorial Army personnel will however be treated as ex-servicemen.

b. OBC: - OBC category of candidates will be authorized only if they have caste certificate issued by the Government of NCT, Delhi. It is not necessary to have listed on Center List of OBCs. The Commission has decided to accept OBC certificate in the prescribed format (containing non-creamy layer status) issued between 11.10.2013 and 08.04.2017 for this examination.

** Note: - If any candidate is found having fraud claims of being SC/ST/ OBC/ExS/ Departmental Candidates (Delhi Police) Status.

We at jagranjosh.com hope that above information would prove worthy to apply in the examination.