Jagran Josh presents Sure Shot series of solved guess papers for sure success in the board examinations. The Set- II of CBSE Class 12 Physics Solved Guess Paper 2016 of this series contains very important questions based on the brief analysis of current examination trend and previous year question papers.

The paper consists of very important questions based on the concepts that are most likely to be asked in the 2016 board exam and also contains the detailed explanation of each question. This paper will surely build your confidence to score optimum marks in the CBSE Class 12 Physics Board Exam. Students can also find other study material to boost up their preparation for the 2016 board exams. 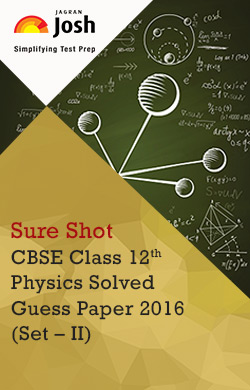