In this article you will get the CBSE Class 9 Science, Sound: Chapter notes (Part-II). This part is a continuation of the part-I of Chapter Notes on Sound where we discussed about Sound, its production, propagation and other relevant topics.

In this part all remaining topics have been covered.

These chapter notes are prepared by the subject experts to bring you a crisp and brief explanation of all important topics so as to make your learning easy and organized. At the end of the notes you can try the questions asked from the discussed set of topics. These questions will help you to track your preparation level and get a hold on the subject.

Keynotes for Chapter - Sound, are:

Necessary Conditions for the formation of an Echo
There are two conditions to experience the echo of sound -
(i) Time gap between the Sound must come back to the person after 0.1 second.
(ii) For above condition, the reflecting surface must be at a minimum distance of 17.2m. It also depends on temperature.

Light Travels Faster Than Sound
Speed of light in air = 3 × 108 m/s
Man hears sound of thunder only after he sees the flash of lightning. This is because light travels at a very great speed as compared to the speed of sound, we see the flash before the sound.

Applications of  Ultrasound
These are the sound waves having frequency more than 20,000 Hz. Due to the high frequency, ultrasound is associated with more energy and can penetrate upto a large extent. This characteristic of ultrasound makes it very useful for many purposes. Some of its uses are stated below: 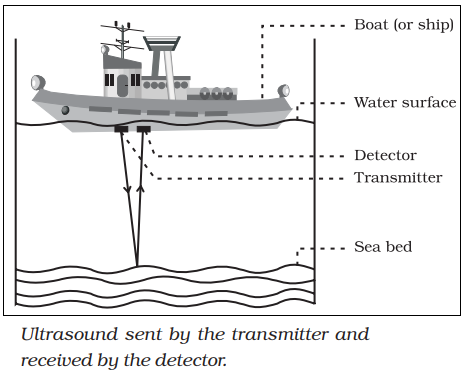 Speed of sound through sea water is v

This method of measuring distance is also known as ‘echo-ranging’. 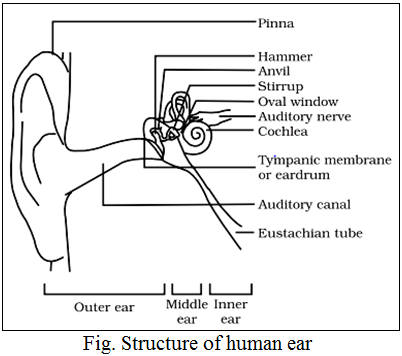 Outer Ear: The outer ear is outside the body and is also called pinna. It extends into the ear canal. Ear canal is filled with air.
Middle Ear: The middle ear is composed of the ear drum or tympanunn( it is an elastic membrane, circular in shape) and the bone ossicles. There are three bone ossicles, namely, the hammer, the anvil and the strirrup.
Inner Ear: The internal ear is composed of a cochlea and three semi-circular canals. The cochlea is filled with liquid. The cochlea makes the hearing apparatus and the auditory nerve from it goes to the brain.
Eardrum is the intersection of the outer and middle ear.
Oval window is the intersection of middle and inner ear.

Q1. Flash and thunder are produced simultaneously. But thunder is heard a few seconds after the flash is seen, why?

Q2. An echo is returned in 3 s. What is the distance of the reflecting surface from the source, given the speed of sound is 342 ms-1

Q3. Why are the ceilings of concert halls curved?

Q4. A submarine emits a sonar pulse, which returns from an underwater cliff in 1.02 s. If the speed of sound in salt water is 1531 m/s, how far away is the cliff?

Q5. An explosion takes place at the moon. After what time would it be heard at the earth?

Q6. How does the sound produced by a vibrating object in a medium reach your ear?

Q7. How do bats navigate even in the dark?

Q8. A submarine emits a sonar pulse, which returns from an underwater cliff in 1.02 s. If the speed of sound in salt water is 1531 m/s, how far away is the cliff?