CBSE has released a press note showing the correct data of re-evaluation 2018. In this statement CBSE has refuted all the facts published in the leading news papers. Read this article to know the whole matter.

For last few days, the news of blunders in checking of answer sheets by the CBSE board is making rounds. As per the statements covered by almost all the leading newspapers, around round 50 per cent students of Class 12th have received improved marks after the re-evaluation of their challenged answer sheets.

CBSE Re-Evaluation gave a New Topper to the Nagpur City

After the Central Board of Secondary Education (CBSE) conducted the Class 12 re-evaluation of marks, a new topper has emerged in the Nagpur state. According to reports, Ishrita Gupta is the Class 12 CBSE board exam topper in Nagpur.

Ishrita Gupta challenged the Board for her marks in Political Science. After the re-evaluation, it was found that 17 of her answers were marked incorrectly. Her score was increased by 22 marks.

CBSE Denies the Facts Published by the Leading Newspapers

In order to prove all the facts related to CBSE’s re-evaluation process that circulated by the various news agencies wrong, the board has released a press note. In this press statement, undersigned by Anurag Tripathi, secretary, CBSE, the board has given the correct data regarding the number of students who applied for CBSE re-evaluation and those who got corrections in their marks after re-evaluation.

CBSE’s press note dated 25th July, 2018, states, “The news report which has appeared in a prominent newspaper today stating that ‘50% of class XII CBSE students who asked for re-evaluation got more marks’ does not withhold the scrutiny of any facts. Out of the approximately 1.5 crore answer copies (of 28 lakhs candidates of class X and XII Board), over 61 lakh copies were from class XII. Of these, there were 66,876 applications for the first stage verification process. Out of these 66,876, finally there were changes in marks in only 4632 cases, which is 6.9% of the total. Hence overall, out of about 61 lakh copies, marks changed in case of only 0.075 % cases. Therefore, these news reports are completely misleading and have twisted the facts.”

Given below is a screen shot of the original press note released by the CBSE: 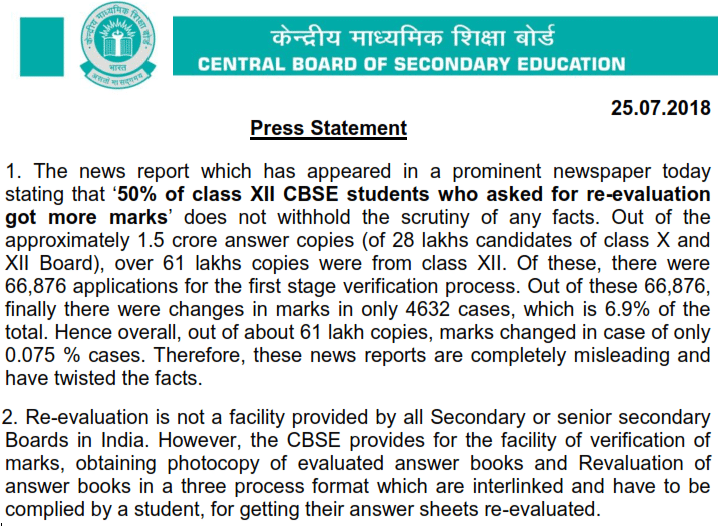 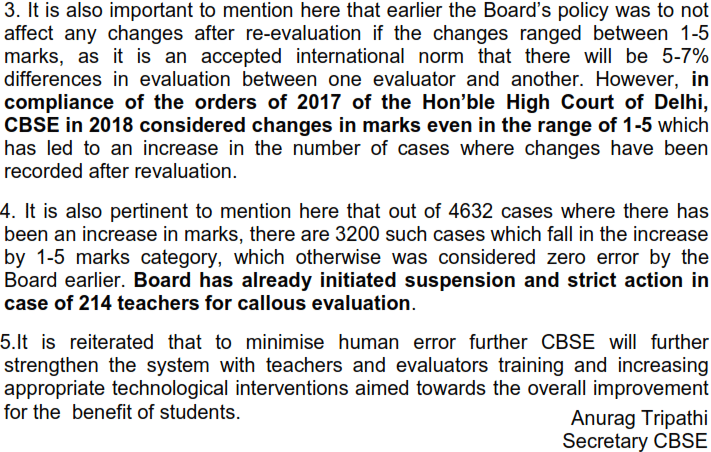 Earlier Anurag Tripathi had told a leading daily that “the two-evaluator system under which CBSE lets two teachers evaluate each paper, has proved to be a successful effort as 99.6 per cent of the copies are correctly evaluated.

“The minimal error rate exists only because of the pressure on evaluators as around 50,000 evaluators are dealing with 61.34 lakh copies." he added.