Directions (1 -4): Study the following information and answer the questions given below:
Eight persons, S, T, U, V, W, X, Y and H, are sitting around a circular table facing the centre but not necessarily in the same order. Each one of them belongs to different states Haryana, Delhi, Rajasthan, Himachal Pradesh, Punjab, Assam, Goa and odisha.

1. Four of the following five are alike in a certain way based on the given arrangement and thus form a group. Which is the one that does not belong to that group?

2. Who among the following is from Himachal Pradesh?

3. Which of the following is true with respect to the given seating arrangement?

a) The Person from Assam is an immediate neighbour of the person from Punjab.

b) Y sits second to the right of V.

c) The Person from Assam and the Delhi are immediate neighbours.

d) The Person from Rajasthan sits to the immediate left of the odisha.

4. Which of the following states does T belongs?

6. Read the following information and answer the question.

Which of the following represents that’ N’ is the son of ’P ‘?

a) Educational qualification is helpful in better governance.

b) This practice will reduce crime rate in the state.

c) People without functional toilets and defaulters are not good administrator.

d) This practice will enable elected representatives to be more accountable.

8. Two cars start from the opposite points of a main road, 200 kms apart. The first car runs for 35 kms and takes a right turn and then runs for 20 kms. It then turns left and runs for another 25 kms and takes the direction back to reach the main road. In the meanwhile, due to a minor breakdown, the other car has run only 45 kms along the main road. What would be the distance between the two cars at this point?

9. Statements:  Some Bags are Books. All Books are Boxes. No Box is Board.

I. Some Bags are not Boards.

II. Some Bags are not Boxes.

III. All Bags are Boxes.

IV. No Bag is Board.

10. Statements: All birds are animals. Some animals are humans. All humans are mammals.

I. Some humans are not birds.

II. Some birds are humans.

III. Some animals are not mammals.

IV. All animals are mammals.

b) Either III or IV follows

c) Either I or II follows

d) Either I or II and either III or IV follow 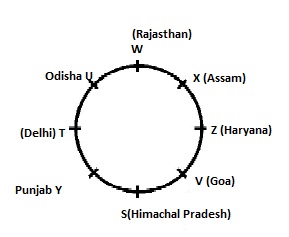 Explanation: 6. P%N means P is father of N and N x R, means N is brother of R, thus N is the son of P.
To contest panchayat elections in Haryana, a general category candidate has to pass at least Class X and a Scheduled Caste candidate at least Class VIII. All candidates should have functional toilets at their residences, face no criminal charges framed in the court and should not be defaulters of any cooperative bank. These were among the amendments passed by the Haryana Cabinet presided over by Chief Minister Manohar Lal Khattar. After the Cabinet meeting, Khattar told reporters the minimum educational qualification was needed to improve the quality of leadership. “It was done to improve the quality of leadership and governance in panchayati raj institutions. This amendment will enable elected representatives to be more accountable, as they would no longer be able to cite illiteracy as an excuse.