What is Social Progress?

Social progress is the continuous improvement –in fulfillment of basic human needs, in enhancement of well being of the constituents of the society-through means which enable themto improve their quality of life and in providing suitable opportunities for realizing full growth potentialthrough complete exercise of their rights and freedom.

Instead of relying on economic factors of measuring progress, Social progress is a comprehensive measure which measures the well-being of a society directly.

The Social Progress Index is based on the works of some of the greatest social thinkers of our times, AmartyaSen, Joseph Stilglitz and Douglass North, being the prominent ones. It also takes feedbacks form observers and keeps evolving and improving itself.

It is created and published by a non-profit organization- ‘Social Progress Imperative’. The Social Progress Imperative is registered as a nonprofit organization in the United States. As per their website, the 2016 version of the index has improved over the 2015 version and it covers an expanded number of countries with 53 indicators. The unique features of SPI are firstly, it completely excludes economic variables and secondly, it relies on outcomes, rather than inputs.

The threebroad dimensions under which these 53 indicators are divided are:

Each dimension comprises four components, as shown in the image below:

When the prominent economist Simon Kuznets first introduced the modern measure of national Gross Domestic Product (GDP) to the U.S. Congress, he warned of its limitations.

The concept of national development is complex, and an economic measure such as GDP cannot alone provide a measure of quality of life. The SPI framework complements a substantive amount of research, emphasizing the importance of moving ‘beyond GDP’.

As powerfully articulated by AmartyaSen in his development of the capability approach, a constructive way to move ‘beyond GDP’ is to measure how well a particular society helps individuals realize their particular capabilities and activities. Taking cue from this logic, SPI has been designed as an outcome index.

SPI has been designed to aggregate and synthesize multiple outcome measures in a conceptually consistent and transparent manner that is alsonotable to benchmarking progress for decision-makers.

3. Holistic and relevant to all countries

SPI considers social progress in a systematic and comprehensive way, with a framework comprising three elements- dimensions, components and indicators.

3.Each component is composed of indicators that measure as many validaspects of the component as possible. These indicators are aggregated usinga weighted average.

As such, each indicator must meet three criteria:

1.It is internally valid- Each indicator is evaluated to ensure that the procedures used to produce the measure are sound and that it captures what it purports to measure.

2.It is publicly available- To meet the goals of transparency and independent replication, indicator data must be available to the public.

3.Its geographic coverage is extensive- Each indicator must be available for most, if not all, of the countries in the sample.

The Index aims to be a practical tool that can help leaders and practitioners in government, business, and civil society to implement policies and programs that will drive faster social progress. To achieve that goal, outcomes are measured in a granular manner that focuses on specific areas that can be implemented directly.

The Index is structured around 12 components and 53 distinct indicators. The framework not only provides an aggregate country score and ranking, but also allows benchmarking on specific areas of strength and weakness thereby helping change-makers to set strategic priorities and act upon the most pressing issues in their societies. 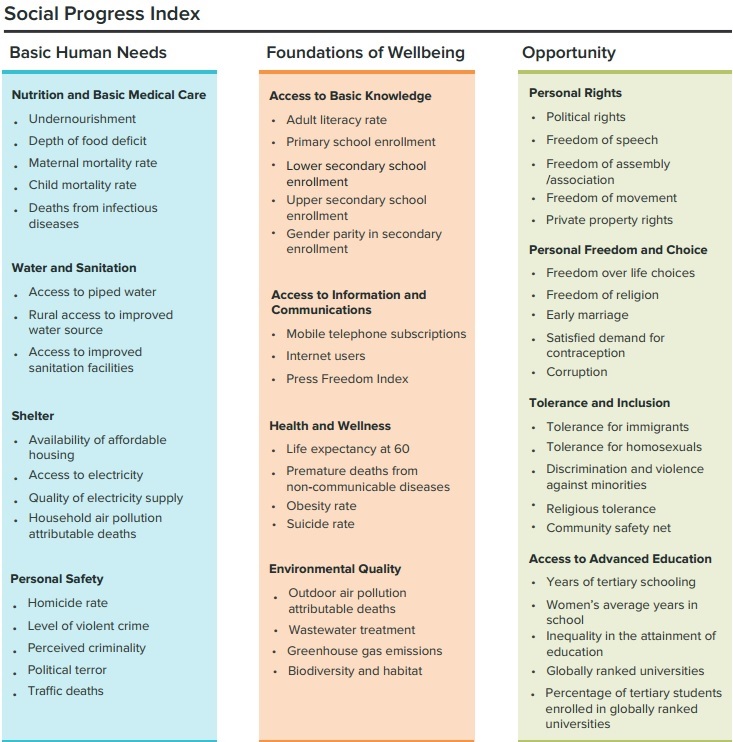 The SPI covers around 99 per cent of the world’s population, although 27 out of 160 countries are evaluated on 9 to 11 of the total 12 components.So, 133 countries which provided data are actually ranked.

• Five of the 12 countries in this group are from the Nordic region. Finland achieved the top spot on the 2016 world ranking with strong performance across all thecomponents of the Index.

• Canada ranks second overall. As with Finland, Canada is known for its social welfare policies. It also leads the world on the Opportunity dimension, ranking first in Access to Advanced Education (score- 87.42), thanks to its top-ranking universities and access to tertiary education.

• Denmark, which is also well known for strong social welfare systems, is in third place overall (89.39), ranking first on Shelter (93.59), and second on Access to Information and Communications (95.80) and Personal Freedom and Choice (90.43).

Ranks and Scores of some countries from various categories: (Rank - Name - Score)

The SPI world average identifies which aspects of social progress are most and least advanced. If the world were a country, it would score 62.88 (out of a possible 100) on the Social Progress Index, ranking between Kyrgyzstan and Mongolia. Breaking down this average across dimensions and components of social progress there is a wide variation in how countries are performing.

The world scores 73.17 in Basic Human Needs and 67.24 on the Foundations of Wellbeing dimensions, but just 48.24 on Opportunity. Creating a society with opportunity for all citizens remains an elusive goal that many nations have failed to achieve. 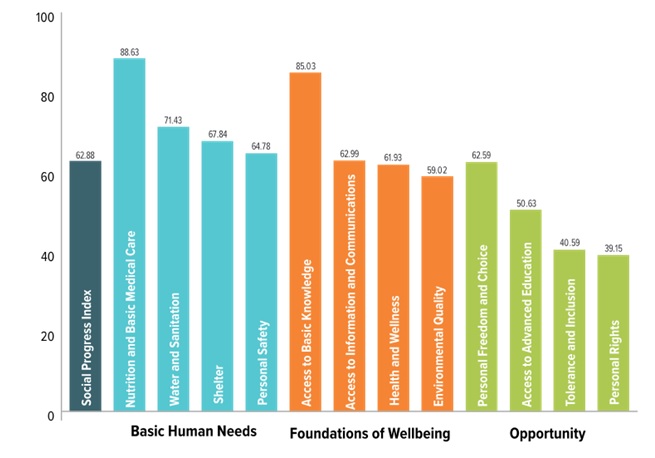 While there is a clear correlation between the level of economic development and social progress, the relationship does vary significantly. The income group of a countryoften does not correspond to its level of social progress, especially in middle- and lower-income countries. The SPI displays a picture of the levels of development in different countries that is independent of traditional economic measures. 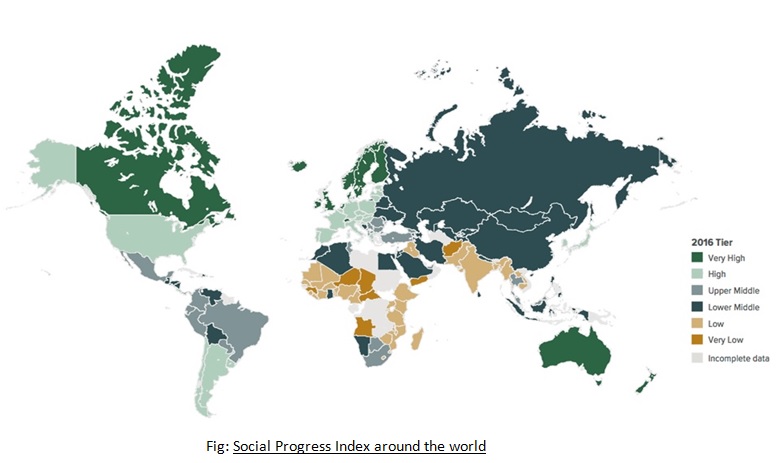 Countries achieve very different overall levels of social progress and widely differing patterns of social progress in dimensions and components. Though the Index shows that high-income countries tend to achieve higher social progress than low-income countries, yet this relationship is neither linear nor simple.
Countries at all levels of development can use this data to assess their performance and set priorities for improvement. It allows a strategic approach to social development that identifies areas for prioritization and investment.

Breaking down in components:

In the Basic Human Needs Dimension, India performs best on Nutrition and Basic Medical Care (Ranked 96th) and has most opportunity to improve on the Water and Sanitation component (Ranked 95th).

In the Foundations of Wellbeing Dimension, India scores highest on Access to Basic Knowledge (Ranked 92nd) but lags on the Environmental Quality component (Ranked 112th).

In the Opportunity Dimension,India is strongest on Personal Freedom and Choice (Ranked 87th), and has the most room to improve on Tolerance and Inclusion (Ranked 129th).

Reason of such rank

• India lies in the tier ‘Low-Social Progress’ alongside includes 24 Sub-Saharan African countries. GDP per capita in this group is quite low, with the exception of Iraq ($14,365) and Swaziland ($7,911)all of them are below $6,000.

• It is notable that only in this tier and in the final tier of countries- that average Basic Human Needs scores are lower than Foundations of Wellbeing.This reflects that countries in the bottom two tiers have, on an average, not yet achieved the level of economic development to make significant advances in fulfillment of Basic Human Needs.

•Basic health in these countries is far from admirable as most of them achieve average performance on Undernourishment, Maternal Mortality Rate, and other indicators within the component.

• As a result, the distribution of population experiencing lower social progress is skewed toward youth. Over half the people living in low and very low social progress countries are under the age of 25 but either unskilled or uneducated, this lacking opportunities.

Ways ahead for the rank improvement

The Social Progress Index has combined the concepts stressed in its research along with moral philosophies dating back to Aristotle in order to compose the underpinning framework of the Index.

The large body of research output generated by SPI can be utilized for betterment of policy discourse on development. By initiation at sub-national level, the index can help development practitioners and other stakeholders in participating and analyzing wellbeing, in a better and broader bottom-up approach.

The transparency, through open access of SPI data, can enable a better understanding of what is working for which aspect of wellbeing and which aspect needs an enhanced relook.

To truly advance social progress, we must learn to measure it rigorously and comprehensively. When everyone uses the same vocabulary to describe challenges, it's that much easier to overcome them.