Enrich your vocab for SBI PO 2017: ‘Budget 2017: Can government walk its impressive talk?’

To cater to your vocabulary needs, below is an article taken from a leading newspaper ‘The Economic Times’ (dated February 2nd, 2017). The challenging words are highlighted in bold along with their synonyms, antonyms, and how they are used in the form of a sentence. Good luck! 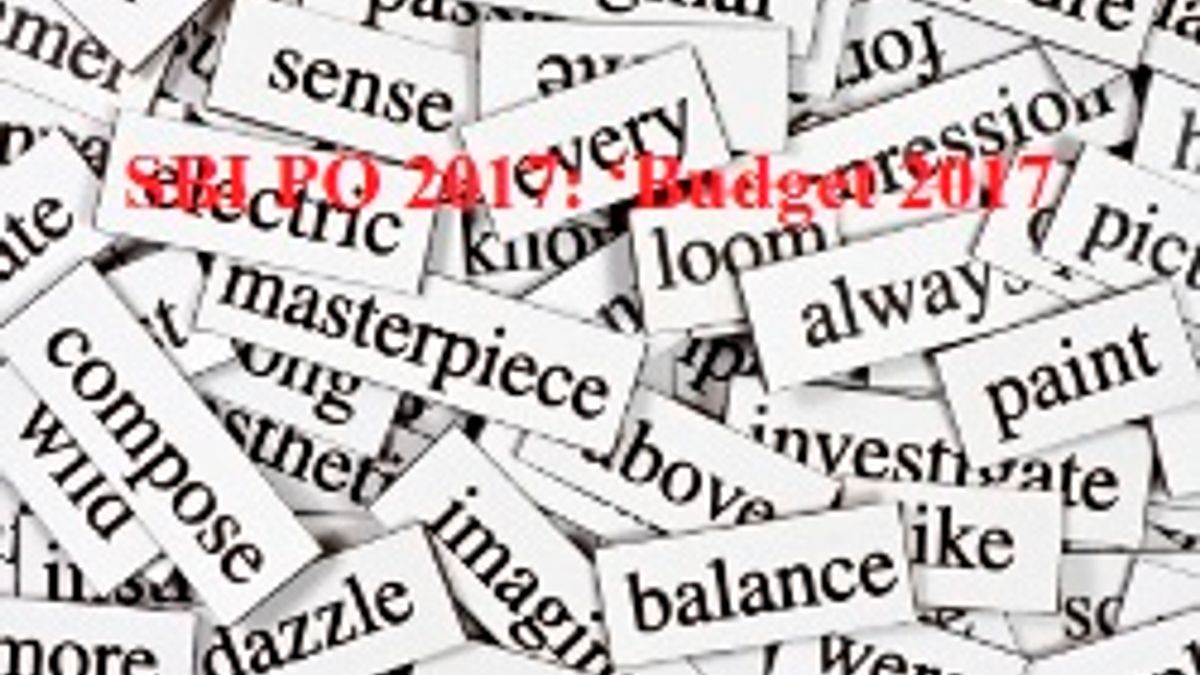 If you are reading something and are not able to understand the meaning of the word then you would agree to this fact that the essence of its real meaning is lost. It does not mean that you need to learn special jargons and complicated words but should be able to decode it into simpler meaning. Therefore, it is worthwhile to constantly work towards improving your word bank. You should strive towards enhancing your vocabulary knowledge, their synonyms, and how can they be applied in the sentence.

It is against the background of declining economic growth and continuing disruptions caused by demonetisation that the Budget for 2017-18 had to be framed. The tasks before the Budget were clear.

It is aware of them and makes frequent references to the need for accelerating growth through raising consumer demand and increasing investment. How does the Budget measure up to these expectations?

First, on the fiscal deficit. The Budget proposes to contain it at 3.2% of GDP — a little below current year’s deficit, and a little above the level projected earlier. Given the extraordinary circumstances, perhaps the relaxation is justified.

The Fiscal Responsibility and Budget Management (FRBM) Review Committee apparently wants to focus on ‘debt to GDP’ ratio even though it has concluded that a fiscal deficit of 3% will be consistent with the new objective. There is considerable logic behind the prescription of a Budget deficit of 3% for the central government and 3% of GDP for all states together. This is in line with household savings in financial assets that, if anything in recent years, has been declining.

In 2016-17, interest payments of the central government constituted 46% of the net revenue of the Centre. This is a large preemption. In fact, it has become customary for every Budget to project a new road map. Too many pause buttons will only make a mockery of the FRBM Act.

But some clarity is required as to how much of this comes from the Budget and how much from other sources. In fact, much of the public investment comes from public sector undertakings (PSUs). A detailed listing of expected investment by PSUs would indeed be helpful. There is a large list of programmes and schemes indicated in the Budget speech. Many of them are extensions of existing ones. Nevertheless, they add up to a substantial amount. But their impact depends on how well they are executed. The pick-up in rural demand heavily rests on this.

Gross tax revenue is expected to increase by 12.3% in 2017-18 over the revised estimates for 2016-17. Nominal GDP in 2017-18 is expected to increase by 11.75%. This gives a tax buoyancy of little above 1%. This is reasonable. On the tax side, there are no fundamental changes in the tax structure. This, in some ways, is welcome. The reduction in the corporate tax applies only to MSMEs. The reduction in the income-tax rate for the lowest slab is better than raising the exemption limit. We cannot afford to reduce the tax net.

The Budget could have announced the changes in indirect taxes consistent with the new GST regime. Overall, the changes in the tax structure are minimal. The changes announced are in the right direction. There are other features such as those relating to curbing black money, reforming the political funding system and expanding the use of digital payments. All these are welcome steps.

Big corporates may not find any direct incentive for investment. If, however, the overall investment climate picks up because of higher growth, it will be of help. While there are possibilities of a cut in interest rate, the banks themselves are under stress. One should not expect too much.

The Budget presented on Wednesday is a workman-like Budget. It is neither grandiose nor populist. It is well-intentioned. But the impact on growth and investment will depend on how effectively and speedily the various programmes are implemented. Equally important is how quickly the authorities normalise the situation and bring to an end the disruptions resulting from demonetisation.

1. Accelerating (adjective) (त्वरणशील): is to begin to move quickly.

Sentence: The upcoming budget has high hopes that it will help in accelerating the economy.

3. Deficit (adjective) (बाधित): refers to the total amount by which money spent is more than money received.

Sentence: Since the business is in a deficit condition, we will not be able to disburse holiday bonuses.

4. Apparently (adverb) (बिल्कुल): is used to describe something that appears to be true.

Sentence: He has called several times since morning, apparently he is really interested in meeting you.

5. Preemption (noun) (हथियाना): is the right of purchasing before others.

Sentence: His preemption claim for the property was expired by the operation of law.

Sentence: Mockery should not be aimed to insult people rather it should be treated as a harmless fun.

7. Customary (adjective) (आचारिक): is something which is usual or established by custom rather than law.

Sentence: It is customary in every wedding to take blessings from God and the family members.

8. Substantial (adjective) (ठोस): is something which is of considerable importance, size or worth.

Sentence: In this quarter, our company had suffered substantial losses due to demonitisation.

9. Buoyancy (noun) (प्लवन शीलता): is based on Archimedes principle which speaks about the ability or tendency of something to float in water or other fluid.

Sentence: A perfect example buoyancy is when a boat floats in the water.

10. Grandiose (adjective) (दिखावटी): is something which is large and containing more detail than necessary.

Sentence: With all vigor, he started working on a grandiose and scenic enterprise.

Question (1-5): Answer the following as directed

1. Find out the words which mean the same as ‘populist’(लोकवादी)
1. Elitist
2. General
3. Libertarian
4. Private
5. Other than those given in options

Explanation: The given word refers to a political style of action which is based on the interests of ordinary people. From the above-given options, option (3) is a right choice as the synonym of the word.

2. Find out the words which mean the same as ‘curbing’(रोकने)
1. Hamper
2. Encourage
3. Permit
4. Forward
5. Other than those given in options

Explanation: The given word means to limit or control something which is unwanted. Hence, from the given options, option (1) is the correct choice as the synonym of the word.

Explanation: The given word refers to a flat piece of large, thick or flat piece of stone or concrete. So, from the given options, option (2) is an apt choice as the synonym of the word given in the options.

4. Find out the words which mean the same as ‘disruptions’ (तोड़)
1. Harmony
2. Discipline
3. Consensus
4. Turmoil
5. Other than those given in options

Explanation: The given word refers toprevent something, which can be a system, process of the event.So, from the given options, option (4) is the right choice as the synonym of the word given in the options.

5. Find out the words which mean the same as ‘incentive’ (प्रोत्साहन)
1. Discouragement
2. Hindrance
3. Enticement
4. Prevention
5. Other than those given in options

Explanation: The given word refers to something that holds a positive influence and encourages a person to do something.Hence, from all the above option (3) is the right choice as the synonym of the word given in the options.

Word of the Day

Meaning (English) – refers to a person’s style of speaking or writing that uses only a few words.

Example – His laconic speech wooed everyone.