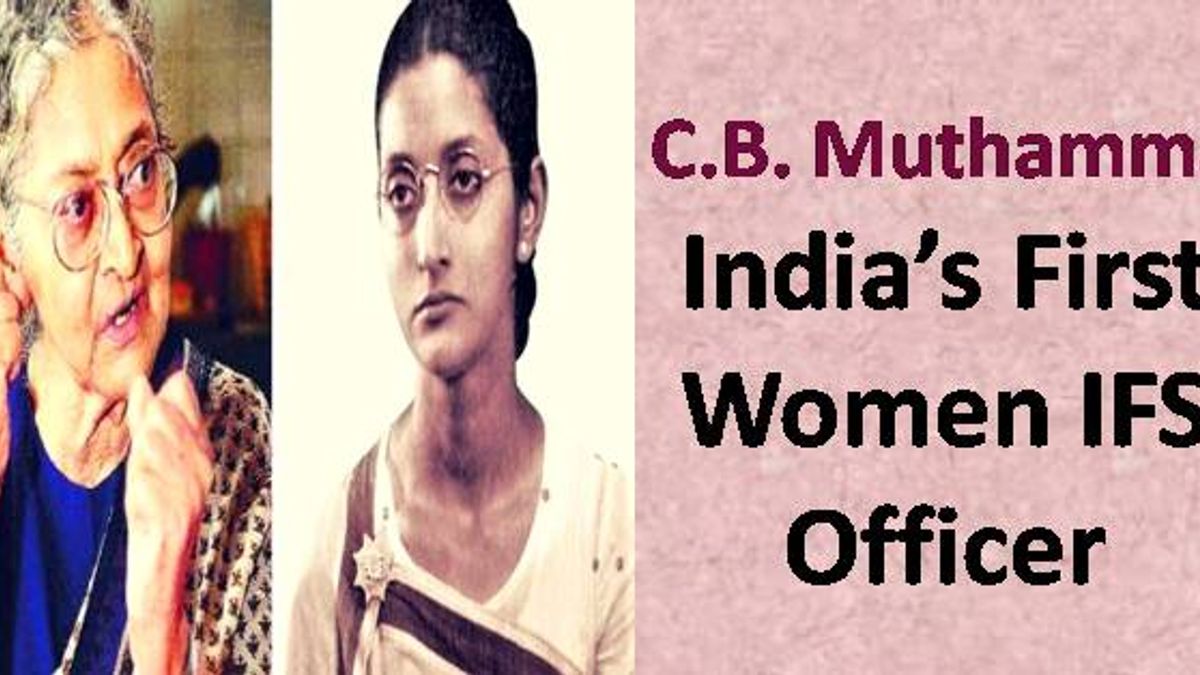 Indian Foreign Service has given India some exemplary women bureaucrats and it all started with C. B. Muthamma, who became India’s first women foreign officer after qualifying the civil services exam in 1948. The IFS post offers immense power and privileges especially in shaping the future of the country on the global platform.

Women in India are often considered to be the second gender especially during the initial years of Indian independence when woman literacy in India was abysmally low. Still, we had women like Ms C. B Muthamma who were able to break all stereotypes and able to crack the toughest exam in the country. She becomes not only the first woman to crack the exam in independent India but also the first woman foreign diplomat of India.

In this following article, we have highlighted the unique life journey of India’s first woman ambassador beginning from qualifying the civil services exam to fighting against the gender bias within the Indian Foreign Services.

C.B. Muthamma was the first woman of India who sat in the examinations of the Indian Civil Services in the year 1948. She had joined the Indian Foreign Service (IFS) in the year 1949 and became the first Indian woman diplomat and then the first Indian woman Ambassador/High Commissioner. But for achieving the Ambassador’s post, she had to struggle a lot in order to establish the gender equality in India of male-dominated Indian civil services.

An ambassador becomes an official representative who went to another state or country as an agent of their own country. An ambassador who is assigned to the Foreign Service needs an approval first by the foreign government.  C. B. Muthamma led the Indian government to the Supreme Court in the year 1979 to pass out the demand for foreign secretary’s post for the woman as well.

It took time but she was able to achieve her dream and she served as an ambassador to the Hungary, Ghana and Netherlands. She got retired from the Indian Foreign Service in the year 1982 after 32 years of long service.

C. B. Muthamma VS Union of India:

Muthamma is known for her successful crusade for gender equality in the Indian Civil Service. The Ministry for external affairs had not promoted CB Muthamma to the post of foreign secretary. Muthamma had to take the Ministry of External Affairs to court when she was denied promotion to Grade I of the service on grounds of “merit”. She petitioned the government, claiming that she had been overlooked for promotion and that the rules governing the employment were discriminatory.

The Supreme Court upheld the case in 1979 in a landmark judgment by a three-member Bench headed by Justice V.R. Krishna Iyer. The judgment of Muthamma's case described the Foreign Service as ‘misogynist.’ The Supreme Court Judgement ensured that henceforth it was not mandatory for women officers in the IFS to seek government permission for getting married.

To show the existence of gender discrimination in the services, Iyer cited Rule 8 (2) of the Indian Foreign Service (Conduct and Discipline) Rules which stated that a woman member of the service shall obtain the permission of the government in writing before her marriage is solemnised. Any time after the marriage, a woman member of the Service may be required to resign from Service, if the government is satisfied that her family and domestic commitments are likely to come in the way of due and efficient discharge of her duties as a member of the Service.

Crusader for women rights in India:

She was active ever thereafter and continued to be an activist into retirement. She was nominated as the Indian member of the Independent Commission on Disarmament and Security Issues set up by the then Swedish Prime Minister. Muthamma was also a passionate environmentalist and a culinary enthusiast as well. She has mentioned the gender discrimination in India in her book titled “Slain by the System –India’s Real Crisis”. She has contributed around 15 acres of her land in Delhi to “The Missionaries of Charity” to set up a school for the orphans. C.B. Muthamma passed away at the age of 85.

C. B Muthamma was a true civil servant who devoted her whole life to the country’s service not just within the foreign services but also by in setting a level playing field for all the future woman civil servants in the country. She proved that as long as social justice is an integral part of our constitutional fundamentals, gender justice will remain a non-negotiable article of faith. Professional gender bias and discrimination have no place in the present society even if it is the glass ceiling at the level of Government employment.