General awareness for MBA aspirants is a very important aspect. As a potential candidate who aims to pursue MBA, it is crucial that your GA quotient must be high. This section is aimed at enhancing your knowledge about the important news and happenings that took place in the world in this week (17th to 24th March). It will help you in your preparation for the competitive exams in which you wish to excel.

General awareness for MBA aspirants is a very important aspect. As a potential candidate who aims to pursue MBA, it is crucial that your GA quotient must be high. This section is aimed at enhancing your knowledge about the important news and happenings that took place in the world in this week (17th to 24th March). It will help you in your preparation for the competitive exams in which you wish to excel.

1. The Indian financial service provider Edelweiss has acquired the Indian assets management business of JP Morgan. They would manage its Rs. 7,000 crores business. At present, Edelweiss is managing its Indian business of worth Rs. 2,000 crores along with the global business accounting to Rs 31,000 crores. Rashesh Shah is the current chairman of the Edelweiss Group and Nitin Jain is the CEO of global asset and wealth management wing of Edelweiss group. 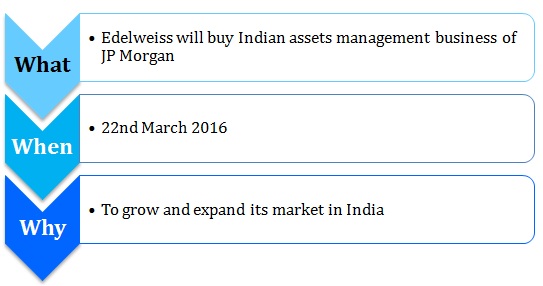 2. MRG Hospitality and Infrastructure which is owned by Goldfinch boutique hotel chain is foraying into restaurant and hotel business in North India. The company has launched a coastal cuisine restaurant “Sana Di Ge” on Malcha Marg in New Delhi. The chairman of the group is Prakash Shetty. The company plans to invest Rs. 100 crores in this venture.

Recently, the company also acquired the 72-room Express Sarovar Portico business hotel in Surajkund, with an objective to re-launch it as Goldfinch hotel.

3. The finance minister, Arun Jaitley has appeased the agitated jewellers against imposition of 1% excise duty, and assured that the artisans and job workers will not be liable to pay this levy. The finance ministry also mentioned that artisans and job workers are not covered by this duty and thus they are not required to take registration, pay duty, file returns, and maintain any books of account.

1. National Food Security Act (NFSA) will be implemented in 10 states of India with effect from 1st April 2016. This move would increase the states covered under the subsidized food scheme to 21states. All the 10 States, including Gujarat, will launch the food security programme in Ahmedabad as per the details provided by the Union Food and Civil Supply Minister Ram Vilas Paswan.

2. India will host the 8th annual Summit of BRICS (Brazil-Russia-India-China-South Africa) from October 15—16 in Goa. India will chair the influential bloc that comprises of five countries with 42 per cent of the world population. The official logo of the event is a lotus having colours from all the five member countries and a traditional ‘namaste’ in the centre. For the event, various activities have also been planned such as “BRICS Under-17 Football Tournament, BRICS Film Festival, BRICS Wellness Forum, 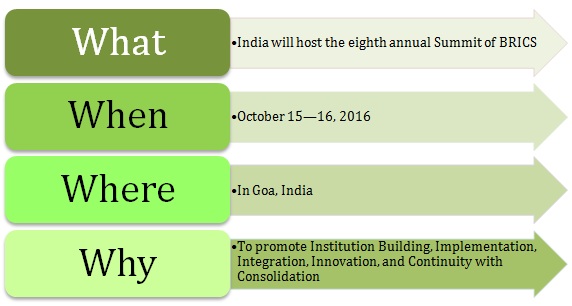 3. The campaign which was conducted to include the Agasthyamala Biosphere Reserve (ABR) in UNESCO’s World Network of Biosphere Reserves (BR) has finally paid off. The Agasthyamala Biosphere Reserve has been included at the International Coordinating Council of the Man and the Biosphere programme of UNESCO. ABR is situated at the southern-most end of the Western Ghats and is spread over Kerala and Tamil Nadu and covers an area of 3,500 sq km at an altitude ranging from 100 metres to 1,868 metres above the Mean Sea Level. Researchers have noted that about 400 Red Listed Plants have been recorded from ABR. About 125 species of orchids and rare, endemic and threatened plants have been recorded from the reserve.

1. On 15 March 2016, Fazle Kabir was appointed as the 11th Governor of the Bangladesh Bank, which is the central bank of Bangladesh. Fazle Kabir is a graduate from University of Chittagong in economics. He has replaced Atiur Rahman, who had resigned from his position after taking moral responsibility over electronic theft of 101 million US dollars from the central bank's account with the New York Federal Reserve Bank. 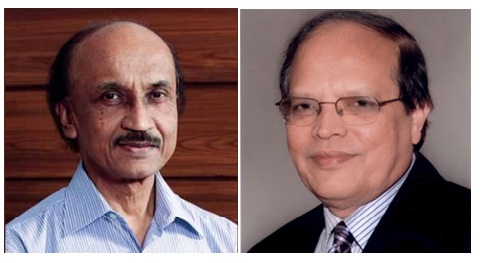 2. On 22nd March 2016, a bomb explosion occurred at the Brussels airport in one of the city’s metro stations killing 34 people and wounding more than dozen people. The Islamic State group has claimed the responsibility for the attack. About an hour later, another bomb exploded on a rush-hour subway train near the European Union headquarters. Terrified passengers had to evacuate through darkened tunnels to safety. The Belgian Prime Minister Charles Michel has assured the people of the nation to provide utmost security to them as they are continuously monitoring the terrorist activity.

3. On 21 March 2016, World Poetry Day was observed across the globe. The primary objective of the Day is to support linguistic diversity through poetic expression and to offer endangered languages the opportunity to be heard within their communities. Through this occasion the world takes pride in honouring poets, reviving oral traditions of poetry recitals and also promotes the reading, writing and teaching of poetry.

This day was adopted by the UNESCO for the first time during its 30th General Conference in Paris in 1999 to recognise the unique ability of poetry as they capture the creative spirit of the human mind. 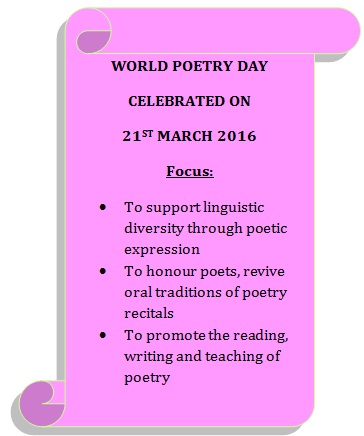 1. On 20 March 2016, Novak Djokovic of Serbia and Victoria Azarenka of Belarusia won men's and women’s singles titles of the BNP Paribas Open at the Indian Wells Tennis Garden in Southern California. Milos Raonic of Canada lost the match against Novak Djokovic in the men's final while Serena Williams 6-4, 6-4 lost the match against Victoria Azarenka.

2. On 20 March 2016, Gurmeet Singh became the first Indian athlete to win a gold medal in the Asian 20 Kilometer (km) Race Walk Championships. It was for the first time in 34 years that an Indian won ‘gold medal’ in either an Asian Championships or Asian Games in this event. Gurmeet Singh took 1 hour 20 minutes and 29 seconds to complete the race while his competitor Isamu Fujisawa of Japan took 1:20:49 with close fight in the last 5-km. Georgiy Sheiko of Kazakhstan won the bronze medal in 1:21:52. 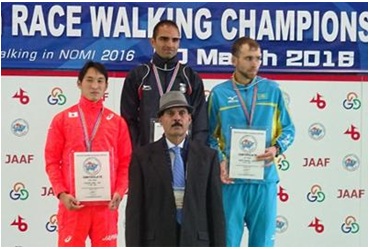 Earlier, Hakam Singh and Chand Ram won a Gold medal each in 20-km road walk in 1978 and 1982 respectively in the Asian Games.

3. On 20 March 2016, Indian wrestler Hardeep Singh has won the silver medal in the Asian Olympic Qualification Tournament that was held in Astana, Kazakhstan. This achievement has rendered Hardeep Singh to become the first Indian in 12 years to get an Olympic berth in the Greco-Roman category. In fact, this is also the first time an Indian Greco-Roman grappler has ensured a place in the Olympics in a heavyweight category.