Gram Uday Se Bharat Uday Abhiyan will be a flagship program of the Government of India to propagate the information regarding the vaious goverment schemes for the farmers in the villages.

1. Government policies and intervention for development in various sector, and issues arising out of their design and implementation.
2. Issues relating to development and management of social sector/services relating to health, education, human resources.

1.    Indian Economy and issues relating to planning, mobilization of resources, growth, development and employment.
2.    Inclusive growth and issues arising from it.

1.    In recent times there has been a surge in feeling of regionalism which could be counterproductive for the development of India. In this circumstances critically analyze the new initiative ‘Gram Uday se Bharat Uday’.  Do you think that it will really harness its potential to bring harmony in society? 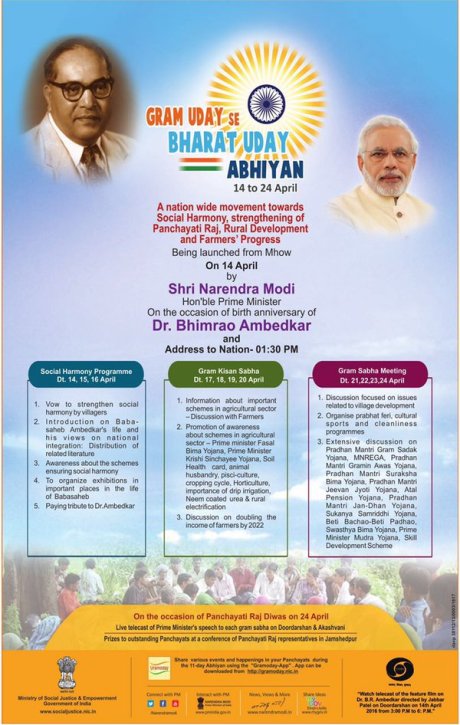 This campaign will take place in association with- Central Government + States government + Local Government (Panchayats). It will be organized at various level.

•    To generate and escalates nation-wide efforts across villages to increase social harmony.

•    Promotion of rural development, and to foster and empower farmers for their collective progress.

Gram Uday se Bharat Uday Campaign and address all the Gram Sabhas of the country.
From 14th April to 16th April, 2016 a ‘Social Harmony Programme’ will take place in all Gram Panchayats, supported collaboratively by the Ministry of Panchayati Raj and the Ministry of Social Justice and Empowerment and resolve to strengthen social harmony.

Subsequently to promote agriculture ‘Village Farmer Assemblies’ will be organized in Gram Panchayats. The aim of this programme isto provides the detailed information about schemes regarding agriculture such as the Fasal Bima Yojna, Social Health Card etc. to farmers and their suggestions for bringing about improvements in agriculture will be solicited. Preceding the main event of Gram Sabha meetings for Panchayati Raj Day, a National meeting of tribal women Gram Panchayat Presidents from Fifth Schedule Areas of 10 States will be held, which will be mainly focused on Panchayat and tribal development.

Gram Sabha meetings will be followed by this across the country. On this day, there will be a Prabhat Pheri (or morning walk) in the village, a programme on sanitation, a cultural programme as well as a sports programme. The topics of discussions in these Gram Sabhas will include :-

•    Role of women in village and rural development.

•    Social inclusion including welfare of Scheduled Castes, Scheduled Tribes, person with Disabilities and other marginalized groups.

Information regarding various schemes for socio-economic development will be provided.