Keeping track of everyday development and their consequences makes the IAS Preparation very difficult. It is the IAS Exam only which do not ask the current affairs in a direct fashion, but ask all the important implications of the Current event . These implications can be based on the pragmatic predictions also. But to predict a future turn of events. One has to be very much conversant of the past.

For IAS preparation, linking the past with present and future is a must. It will help in comprehending the topic in its entirety. This entirety helps in the IAS Prelims as well as IAS Main Exam. The IAS preparation demands heavy data storage and its timely retrieval on the demands of the questions of IAS Exam. Doing practice questions is one way to train the brain for these demands. We are providing the practice questions for the IAS Prelims Exam 2018.

1.    Which of the following is false regarding the recent India and UK MoU on the return of illegal migrants.

a.    It will facilitate that the Visa Free Agreement for holders of Diplomatic passports as well as liberalization of the UK Visa Regime for those who are travelling to the UK legally
b.    It will ensure the return of persons who have no lawful basis to be in the territory of the other Party
c.    It will help in streamlining the procedure of return of nationals who are caught to be staying illegally, belonging to the other party in a specified time-frame.
d.    All of the above

The Union Cabinet chaired by Prime Minister Shri Narendra Modi has given its approval to the MoU between India and the United Kingdom and Northern Ireland on the return of Illegal Migrants.

The MoU will facilitate that the Visa Free Agreement for holders of Diplomatic passports as well as liberalization of the UK Visa Regime for those who are travelling to the UK legally, after the conclusion of the MoU.

It will ensure the return of persons who have no lawful basis to be in the territory of the other Party after verification of nationality to its satisfaction.

It will help in streamlining the procedure of return of nationals who are caught to be staying illegally, belonging to the other party in a specified time-frame.

2.    Consider following regarding the Transformation of Aspirational Districts’ initiative. The districts were selected in the basis of

1.    The districts were selected on the basis of using a composite index of key data sets that included deprivation enumerated under the Socio-Economic Caste Census
2.    Key health and education sector performance
3.    State of basic infrastructure
4.    Area of the district

Which of the following is true?

The 115 districts were identified from 28 states, at least one from each state, in a transparent  manner by a committee of Senior Officers to the Government of India, in consultation with State Officials using a composite index of key data sets that included deprivation enumerated under the Socio-Economic Caste Census, key health and education sector performance and state of basic infrastructure.

The ‘Transformation of Aspirational Districts’ initiative aims to remove this heterogeneity through a mass movement to quickly and effectively transform these districts. On the 75th anniversary of the Quit India Movement on 9th August 2017, Hon’ble Prime Minister interacted with the District Collectors through video conference and stated that “when the socioeconomic conditions improve in the 100 most backward districts, it would give a big boost to the overall development of the country”.

The broad contours of the programme are Convergence (of Central & State Schemes),Collaboration (of Central, State level ‘Prabhari’ Officers & District Collectors), and Competition among districts driven by a spirit of mass Movement. With States as the main drivers, this program will focus on the strength of each district, identify low-hanging fruits for immediate improvement, measure progress, and rank districts.

3.    Who decides the number of Judges in the Supreme Court of India?

Common Mistakes in the IAS Preparation

1.    The Indian Space Research Organisation (ISRO)  launched the IRNSS-1I navigation satellite on April 12, 2018
2.    It was the eighth such satellite to be a part of a constellation
3.    It was launched with the help of PSLV-C41
4.    It is a Polar satellite system because launched through the PSLV rockets.

Which of the following is False

India's Polar Satellite Launch Vehicle, in its forty-third flight (PSLV-C41) in XL configuration launched IRNSS-1I Satellite from First Launch Pad (FLP) of SDSC SHAR, Sriharikota. The 'XL' configuration of PSLV is used for the twentieth time. The IRNSS-1I is the eighth satellite to join the NavIC navigation satellite constellation.

Prime Minister Narendra Modi on April 29, 2016 named the new system as 'NAVIC' (boatman) as he dedicated it to the people of the country and said SAARC countries can also take advantage of its services. PM Modi gave the expanded form of 'NAVIC' as 'Navigation with Indian Constellation'.
With seven satellites in orbit, the constellation’s primary focus is to provide information in the Indian region and 1,500 kilometers around the mainland.
IRNSS will provide two types of services, namely, the Standard Positioning Service (SPS) which is provided to all the users and Restricted Service (RS), which is an encrypted service provided only to the authorised users. The IRNSS System is expected to provide a position accuracy of better than 20 m in the primary service area. 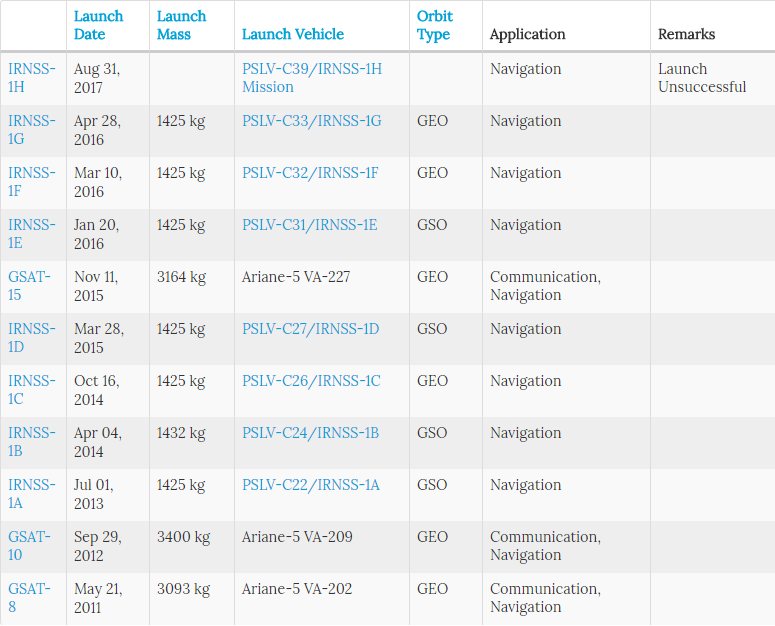 5.    Which of the following institution has launched the project” Science and the City”

National Centre for Biological Sciences (NCBS) has launched an initiative to take science to the people, to their very doorstep, as a matter of fact. The initiative, called Science and the City, encourages apartment complexes to host lectures on popular science topics on their own premises, at no cost.