The following post comprise of the complete data about the candidates registered, appeared and qualified in the JEE Advanced according to their category.

In 2014, JEE Advanced was conducted by the CBSE for the second time. For conducting the exam, the whole country was divided into seven zones. These zones are decided on the basis of IITs (Bombay, Delhi, Guwahati, Kanpur, Kharagpur, Madras, Roorkee). The data of the candidates was divided according to their respective zones.  Following table consists of the candidates appeared & registered for JEE Advanced exam according to their category. In year 2014, 126995 candidates registered themselves for JEE Advanced exam. Out of which 94.16% (119580) of total registered candidates, appeared in the JEE Advanced-2014. Out of the registered candidates 39.68% (50123) are of general category, 16% (20331) are of SC category, 6.55% (8319) are of ST category and 37.97% (48222) are of OBC (NCL) category. 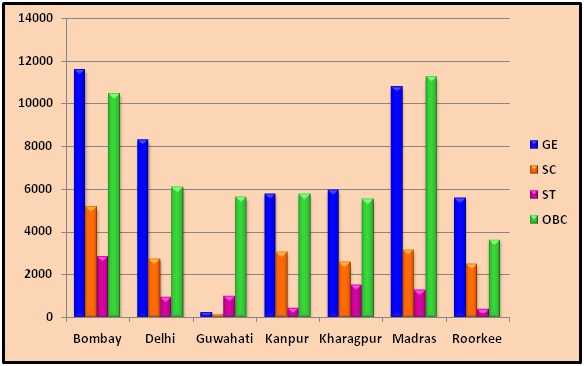 Following table in the post comprises of the zone wise data of the candidate qualified in the JEE advanced exam.