The following post comprise of the complete data about the candidates registered, appeared and qualified in the JEE Advanced. The no of male and female candidates is also given in the tabular form.

In 2014, JEE Advanced was conducted by the CBSE for the second time. For conducting the exam, the whole country was divided into seven zones. These zones are decided on the basis of IITs (Bombay, Delhi, Guwahati, Kanpur, Kharagpur, Madras, Roorkee). The data of the candidates was divided according to their respective zones.  Following table consists of the candidates appeared, registered and qualified in the JEE Advanced exam. Another table in the post comprise of the zone wise data of male and female candidate appeared and qualified in the JEE advanced exam. 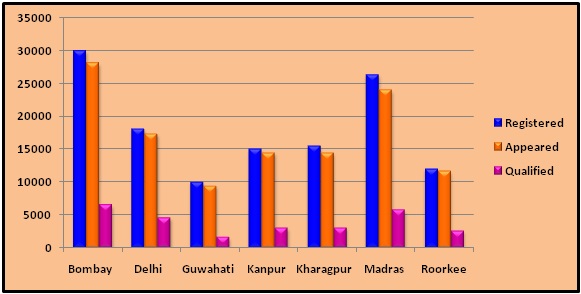