Students appeared for JEE Main 2019 April exam, can expect the result by this week if NTA follows the same trend of January session. Check here complete procedure to be followed by NTA for calculating Raw Score, NTA Score, Percentile Score, All India Ranking (AIR) of candidates who appeared for both January and April session.

JEE Main Result 2019 to be expected by the end of this week as per the past trends followed by NTA. The National Testing Agency (NTA) has already displayed the JEE Main Answer Key 2019 and JEE Main Question Paper 2019 at jeemain.nic.in. Candidates were also allowed to raise objections against the Answer Key by April 16. In January session, the result of the exam was released two days after the closing of objection window. Thus, we can expect the result by April 20 as this time, the National Testing Agency will have to declare JEE Main Rank 2019 along with the NTA score of April exam. NTA will consider better of the two NTA Scores of all candidates who appeared in both Jan 2019 and April 2019 examinations. 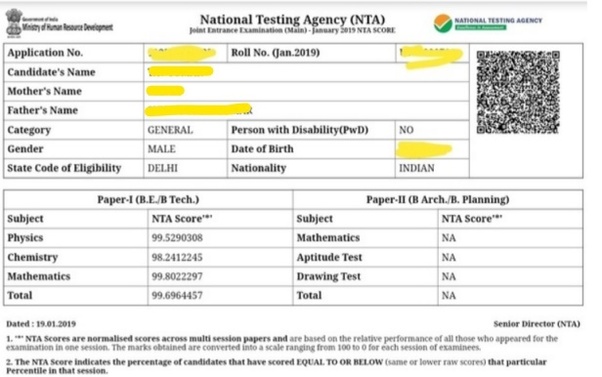 The row score will be calculated by NTA on the basis of the marking scheme of the examination. For each correct answer marked by the candidates 4 marks will be added, while for each incorrect answer, 1 mark will be deducted from the total score. The row score of each candidate for each subject (Maths, Physics and Chemistry) will be calculated by the National Testing Agency.

Gurmeet appeared for the first shift of JEE Main 2019 on April 8 in which a total of 1, 00, 000 students appeared. She scored marks as per the marking scheme.

The percentile scores will be obtained by converting the raw marks into a scale ranging from 100 to 0 for each session of examinees. The Percentile score will be the Normalized Score for the examination (instead of the raw marks of the candidate) and shall be used for preparation of the merit lists.

Note:- The Percentile Scores will be calculated up to 7 decimal places to avoid bunching effect and reduce ties.

Let us convert the raw score obtained by Gurmeet into NTA score or Normalized score using the below formula:

(a) Candidates obtaining higher Percentile Score in Mathematics will get higher rank.

(b) Candidates obtaining higher Percentile Score in Physics will get higher rank.

(d) Candidates older in age will get higher rank.

After the JEE Main April 2019 exam, the ranks of the candidates will be released taking into consideration better of the two NTA Scores of all candidates appeared in Jan 2019 and April 2019 examinations and in accordance with the policy already made available on the website. After securing rank among top 2.45 lakh candidates in JEE Main 2019, students can register themselves for JEE Advanced 2019 for which the registration window will be activated from May 3. JEE Advanced 2019 is the next stage of IIT JEE for admission to Indian Institutes of Technology (IITs). Experts at Jagran Josh, after analysing the prominent factors, have prepared the expected cut-off of JEE Main 2019. This expected cut-off is totally based on the general calculations performed for the trends in previous years and number of candidates appeared in JEE Main 2019. Details can be checked from the following link:

The first session of JEE Main 2019 was conducted from January 8 to 12 and the result for the same has been released within one week after concluding the exam. JEE Main Result 2019 to be expected by the end of this week as per the past trends followed by NTA.