In this article you will get CBSE Class 10 Science chapter 2, Chemical Reactions and Equations: NCERT Exemplar Problems and Solutions (Part-I). Every question has been provided with a detailed explanation. All the questions given in this article are very important to prepare for CBSE Class 10 Board Exam 2017-2018. 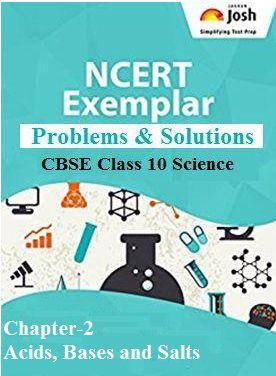 Here you get the CBSE Class 10 Science chapter 2, Acids, Bases and Salts: NCERT Exemplar Problems and Solutions (Part-I). This part of the chapter includes solutions for Question No. 1 to 25 from the NCERT Exemplar Problems for Class 10 Science Chapter: Acids, Bases and Salts. These questions include only the Multiple Choice Questions (MCQs) framed from various important topics in the chapter. Each question is provided with a detailed explanation.

Find below the NCERT Exemplar problems and their solutions for Class 10 Science Chapter, Acids, Bases and Salts:

(i) The temperature of the solution increases.

(ii) The temperature of the solution decreases.

(iii) The temperature of the solution remains the same.

Explanation: The reaction of acid and base is an exothermic reaction and results the formation of salt and water.

Question. 2 An aqueous solution turns red litmus solution blue. Excess addition of which of the following solution would reverse the change?

Explanation:  Alkaline solutions turn red litmus paper to blue. Excess of acid will reverse the changes so we have to add excess of hydrochloric acid which turns the solution acidic.

(a) Absorb the evolved gas

(b) Moisten the gas

(c) Absorb moisture from the gas

Explanation: Calcium chloride is a good dehydrating agent so it is used to absorb moisture from the hydrogen chloride gas.

Question. 4 Which of the following salts does not contain water of crystallisation?

Question. 5 Sodium carbonate is a basic salt because it is a salt of

(a) Strong acid and strong base

(b) Weak acid and weak base

(c) Strong acid and weak base

(d) Weak acid and strong base

Explanation:  Sodium carbonate (Na2CO3) is the salt of carbonic acid (H2CO3) and sodium hydroxide (NaOH). Here NaOH is a strong base and carbonic acid is a weak acid.

Question. 6 Calcium phosphate is present in tooth enamel. Its nature is

Explanation:  Calcium phosphate Ca3(PO4)2 is salt of weak acid and strong base so it is a basic salt.

Question. 7 A sample of soil is mixed with water and allowed to settle. The clear supernatant solution turns the pH paper yellowish-orange. Which of the following would change the colour of this pH paper to greenish-blue?

Question. 8 Which of the following gives the correct increasing order of acid strength?

Explanation:  Water is a natural substance, hydrochloric acid is a strong acid as it ionizes completely in water, whereas acetic acid ionizes only partially in water; hence, it is a weak acid.

Question. 9 If a few drops of a concentrated acid accidentally spills over the hand of a student, what should be done?

(a) Wash the hand with saline solution

(d) Neutralise the acid with a strong alkali

Explanation:  Use of sodium hydrogen carbonate neutralizes the effect of acid completely.

Question. 10 Sodium hydrogen carbonate when added to acetic acid evolves a gas. Which of the following statements are true about the gas evolved?

(i) It turns lime water milky.

(ii) It extinguishes a burning splinter.

(iii) It dissolves in a solution of sodium hydroxide.

(iv) It has a pungent odour.

Question. 11 Common salt besides being used in kitchen can also be used as the raw material for making

Question. 12 One of the constituents of baking powder is sodium hydrogen carbonate, the other constituent is

Explanation: Baking powder is a mixture of sodium hydrogen carbonate and a weak edible acid named as tartaric acid.

Question. 13 To protect tooth decay we are advised to brush our teeth regularly. The nature of the tooth paste commonly used is

Explanation: The tooth paste commonly used is alkaline or basic in nature. So they can neutralize the effect of extra acids present in mouth cavity which are mainly responsible for tooth decay.

Question. 14 Which of the following statements is correct about an aqueous solution of an acid and a base?

(i) Higher the pH, stronger the acid

(iii) Lower the pH, stronger the base

(iv) Lower the pH, weaker the base

Explanation:  The pH values lie between 0 to 14 in which 0 to 7 is acidic medium and 7 to 14 is alkaline or basic medium.

Question. 15 The pH of the gastric juices released during digestion is

Explanation:  Hydrochloric acid is produced by our stomach during digestion.

Question. 16 Which of the following phenomena occur, when a small amount of acid is added to water?

Explanation:  Ionization can be defined as the dissociation of molecule into its respective ions.   Mixing of an acid with water decreases the concentration of acid and is called as dilution.

Question. 17 Which one of the following can be used as an acid-base indicator by a visually impaired student?

Explanation: An olfactory indicator is required for visually impaired student. Vanilla essence imparts different smell in different medium so can be used for such students.

Question. 18 Which of the following substances will not give carbon dioxide on treatment with dilute acid?

Question. 19 Which of the following is acidic in nature?

Question. 20 In an attempt to demonstrate electrical conductivity through an electrolyte, the following apparatus (figure) was set up. 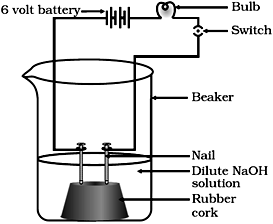 Which among the following statement(s) is/are correct?

(i) Bulb will not glow because electrolyte is not acidic.

(ii) Bulb will glow because NaOH is a strong base and furnishes ions for conduction.

(iii) Bulb will not glow because circuit is incomplete.

(iv) Bulb will not glow because it depends upon the type of electrolytic solution.

Explanation: Strong acids or bases are good conductors of electricity because they ionize completely in aqueous solution to give ions.

Question. 21 Which of the following is used for dissolution of gold?

Explanation: Aqua-regia is a very strong acid and can be used to dissolve gold. It is a 1: 3 mixture of concentrated HNO3 and concentrated HCl.

Question. 22 Which of the following is not a mineral acid?

Explanation: Mineral acids are mainly prepared from the minerals present in the earth's crust so they are also called as  inorganic acids like HCI (hydrochloric acid), H2SO4 (sulphuric acid) and HNO3 (nitric acid). Organic acids are produced from plants or animals and contain carbon atoms like acetic acid, citric acid.

Question. 23 Which among the following is not a base?

Explanation: C2H5OH is an organic compound with –OH functional group that is known as alcohol. It cannot give OH- ions in its solution.

Question. 24 Which of the following statements is not correct?

(a) All metal carbonates react with acid to give a salt, water and carbon dioxide.

(b) All metal oxides react with water to give salt and acid.

(c) Some metals react with acids to give salt and hydrogen.

(d) Some non-metal oxides react with water to form an acid.