In this article you will get CBSE Class 10 Science chapter 7, Control and Coordination: NCERT Exemplar Problems and Solutions (Part-I). Every question has been provided with a detailed explanation. All the questions given in this article are very important to prepare for CBSE Class 10 Board Exam 2017-2018. 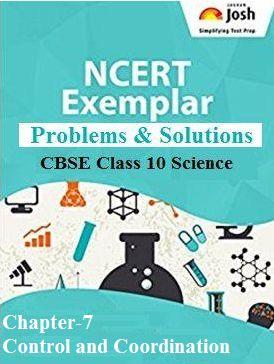 Here you get the CBSE Class 10 Science chapter 7, Control and Coordination: NCERT Exemplar Problems and Solutions (Part-I). This part of the chapter includes solutions for Question No.1 to 33 from the NCERT Exemplar Problems for Class 10 Science Chapter: Control and Coordination. These questions include only the Multiple Choice Questions (MCQs) framed from various important topics of the chapter.

Find below the NCERT Exemplar problems and their solutions for Class 10 Science Chapter, Control and Coordination:

Question. 1 Which of the following statements is correct about receptors?

(b) Both gustatory and olfactory receptors detect smell

Explanation: Gustatory receptors are the taste receptors which are present on the surface of tongue in the form of taste buds. Olfactory receptors help to sense the smell and are located over the roof of nasal cavity.

Question. 2 Electrical impulse travels in a neuron from

Explanation: Dendrite receives signals from sensory receptors or other neurons. Axon serves to conduct the nerve impulse away from the cell body.

Question. 3 In a synapse, chemical signal is transmitted from

(b) Axon to cell body of the same neuron

(c) Cell body to axonal end of the same neuron

Explanation: Neurotransmitters are released from axon of one neuron to dendrite of next neuron.

Question. 4 In a neuron, conversion of electrical signal to a chemical signal occurs at/in

Explanation: Neurotransmitters are released from axonal end of one neuron and transmit the electrical signal to dendrite of next neuron.

Question. 5 Which is the correct sequence of the components of a reflex arc?

Question. 6 Which of the following statements are true?

(iv) The path through which signals are transmitted from a receptor to muscle or a gland is called reflex arc.

Explanation: Reflex arc is a simple nervous pathway and consists of sensory receptor, afferent neuron, centre, efferent neuron and effector organ. Automatic, quick and innate response to particular stimuli that is mediated by reflex arc is known as reflex action.

Question. 7 Which of the following statements are true about the brain?

(i) The main thinking part of brain is hind brain.

(iii) Involuntary actions like salivation, vomiting, blood pressure are controlled by the medulla in the hind brain.

(iv) Cerebellum does not control posture and balance of the body.

Question. 8 Posture and balance of the body is controlled by

Explanation: Cerebellum coordinates the voluntary movements of skeletal muscles as well as posture, balance and equilibrium.

Question. 10 The movement of shoot towards light is

Explanation:  Growth movement of plants in response to light is called as phototropism.

Question. 11 The main function of abscisic acid in plants is to

(a) Increase the length of cells

Question. 12 Which of the following is not associated with growth of plant?

Question. 13 Iodine is necessary for the synthesis of which hormone?

Explanation: Hormones of thyroid gland have iodine as their structural component.

(a) It is produced from pancreas.

(b) It regulates growth and development of the body.

(d) Insufficient secretion of insulin will cause diabetes.

Explanation: Adrenaline is secreted by the adrenal gland.

Question. 16 The shape of guard cells changes due to change in the

(a) Protein composition of cells

(b) Temperature of cells

(c) Amount of water in cells

(d) Position of nucleus in the cells

Explanation: Shape of guard cell is maintained by its turgidity which in turn is regulated by water content of these cells.

Question. 17 The growth of tendril in pea plants is due to

(a) Effect of light

(b) Effect of gravity

Explanation:  Growth movements in response to touch are known as thigmotropism.

Question. 18 The growth of pollen tubes towards ovules is due to

Explanation: Stigma serves as landing platform for pollens as well as secretes chemical substances that attract pollen tube through style towards ovary.

Q. 19 The movement of sunflower in accordance with the path of sun is due to

Explanation: Growth movement of plants in response to light is called as phototropism.

Question. 20 The substance that triggers the fall of mature leaves and fruits from plants is due to

Explanation: Abscisic acid serves to form of layer of abscission.

Question. 21 Which of the following statements about transmission of nerve impulse is incorrect?

(a) Nerve impulse travels from dendritic end towards axonal end

Explanation: Neurotransmitters are released from axon of one neuron to dendrite of next neuron.

Question. 22 Involuntary actions in the body are controlled by

(a) Medulla in fore brain

(b) Medulla in mid brain

Explanation: Medulla is part of hind brain and controls the involuntary action.

Question. 23 Which of the following is not an involuntary action?

Explanation: The actions that are not under our direct control are called as involuntary actions.

Question. 24 When a person is suffering from severe cold, he or she cannot

(d) Differentiate a hot object from a cold object.

Question. 25 What is the correct direction of flow of electrical impulses? 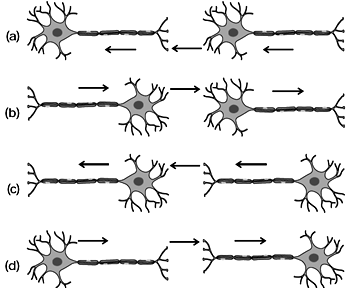 Question. 26 Which statement is not true about thyroxin?

(a) Iron is essential for the synthesis of thyroxin

(b) It regulates carbohydrates, protein and fat metabolism in the body

Question. 27 Dwarfism results due to

(a) Excess secretion of thyroxin

(b) Less secretion of growth hormone

Question. 28 Dramatic changes of body features associated with puberty are mainly because of secretion of

(a) Oestrogen from testes and testosterone from ovary

(b) Estrogen from adrenal gland and testosterone from pituitary gland

(c) Testosterone from testes and estrogen from ovary

(d) Testosterone from thyroid gland and estrogen from pituitary gland

Question. 29 A doctor advised a person to take an injection of insulin because

(a) His blood pressure was low

(b) His heart was beating slowly

(c) He was suffering from goitre

(d) His sugar level in blood was high

Question. 30 The hormone which increase the fertility in males is called

Question. 31 Which of the following endocrine glands is unpaired?

Explanation: Synapse is the junction between two neurons.

Question. 33 In humans, the life processes are controlled and regulated by

(a) Reproductive and endocrine systems

(b) Respiratory and nervous systems