In this article you will get CBSE Class 10 Science chapter 8, Control How do Organisms Reproduce: NCERT Exemplar Problems and Solutions (Part-II). Every question has been provided with a detailed explanation. All the questions given in this article are very important to prepare for CBSE Class 10 Board Exam 2017-2018. 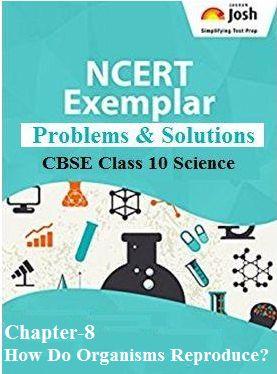 Question. 28 In a bisexual flower inspite of the young stamens being removed artificially, the flower produces fruit. Provide a suitable explanation for the above situation.

A bisexual flower has both male and female reproductive organs. Removal of young stamens to avoid self pollination does not rule out the possibility of cross pollination. Transfer of pollen grains from the anther of another flower to the stigma of emasculated flower causes cross-pollination and fertilized flower forms fruits.

Question. 29 Can you consider cell division as a type of reproduction in unicellular organism? Give one reason.

Question. 30 What is a clone? Why do offspring formed by asexual reproduction exhibit remarkable similarity?

Question. 31 Explain how, offspring and parents of organisms reproducing sexually have the same number of chromosomes?

Question. 32 Colonies of yeast fail to multiply in water, but multiply in sugar solution. Give one reason for this.

Wet dump substratum with supply of nutrients is favored by Rhizopus for spore germination. Spores remain dormant till they come in contact with moist surface. Hence spores of bread mold germinate on moist bread serving as source of moisture and nutrients.
On the other hand, dry bread does not provide moisture needed for spore germination and growth of hyphae.

Question. 34 Give two reasons for the appearance of variations among the progeny formed by sexual reproduction.

Production of genetic variation during sexual reproduction is result of:

Question. 35 Would a Planaria cut vertically into two halves regenerate into two individuals? Complete the given figure D and E by indicating the regenerated regions.

Planaria exhibits regeneration. If its body is cut into two vertical halves, each piece of the body of Planaria grows into a complete individual. 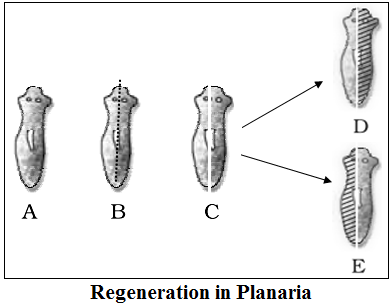 Question. 36 From the internet gather information about the chromosome numbers of five animals and five plants. Correlate the number with the size of organism and answer the following questions.

(a) Do larger organisms have more number of chromosomes/cells?

(b) Can organism with fewer chromosomes reproduce more easily than organisms with more number of chromosomes?

(c) More the number of chromosomes/cells greater is the DNA content. Justify.

Number of chromosomes in somatic cells of some animals and plants

(a) No, there is no correlation between size of organism and its chromosome number. Even smaller organisms may have more chromosomes than the larger ones.

(b) No, process of reproduction is independent of the chromosome number and depends on a environmental factors like nutrients availability, water source, suitable mate etc.

(c) Yes, Genes are the stretch of DNA. Genes are linearly arranged on chromosomes. Hence, more the number of chromosomes, greater is the amount of DNA.

Question. 38 Why cannot fertilization take place in flowers if pollination does not occur?

Pollination is transfer of pollen from one flower to the stigma of same/other flower of same or another plant. It takes place after gamete formation. Only after arrival of pollen grains on stigma and entry of pollen tube into ovary, male gamete can fuse with female gamete (ovum). Hence, pollination is prerequisite for fertilization.

Question. 39 Is the chromosome number of zygote, embryonal cells and adult of a particular organism always constant? How is the constancy maintained in these three stages?

Sexual reproduction includes gamete formation through meiosis and fertilization. Meiosis reduces the number of chromosomes to half in male and female gametes. This reduced chromosome number is then restored to normal during fertilization of male and female gametes. This is how; constant chromosome number is maintained in sexually reproducing organisms. Growth and development of zygote into embryonic cell and then into adult one takes place by mitosis (equatorial cell division) which produce the daughter cells carrying same chromosome number as that of parent cell.

Question. 40 Where is the zygote located in the flower after fertilization?

Ans. Pollination is transfer of pollen from one flower to the stigma of same/other flower of same or another plant. It takes place after gamete formation. Only after arrival of pollen grains on stigma and entry of pollen tube (carrying the male gametes) into ovary, male gamete can fuse with female gamete (ovum). Ovum is present in ovule and ovule is present in ovary.

Therefore, the zygote is present inside the ovule.

Question. 41 Reproduction is linked to stability of population of a species. Justify the statement.

Question. 42 How are general growth and sexual maturation different from each other?

General growth includes increase in height, weight gain, changes in shape and size of the body. Also called as somatic phase, the reproductive organs are less active during somatic growth.

Sexual maturation is a cumulative process that includes all the changes needed to prepare the body for sexual reproduction. It ensures onset of puberty and reproductive phase of an individual.

Question. 43 Trace the path of sperm during ejaculation and mention the gland and their functions associated with the male reproductive system.

(a) Testis Secrete the androgens (testosterone).

(b) Prostate gland serves to provide the force needed for ejaculation. It secretes thin, milky alkaline fluid that adjusts the pH of seminal fluid and serves in motility of sperms.

(c) Cowper glands Their secretion lubricates the end of penis during sexual intercourse and may contain few sperms.

Question. 44 What changes are observed in the uterus if fertilization does not occur?

If fertilization does not occur, thickened endometrium (inner lining of uterus) is disintegrated and sloughed off during menstruation phase (day1-5). Endometrium is needed to support implantation and nutrition of embryo only under pregnancy and is otherwise disintegrated as it does not have any function in non pregnant woman.

Question. 45 What changes are observed in the uterus subsequent to implantation of young embryo?

The uterine lining is thickened every month support the growing embryo. Followed by fertilization, placenta is developed which serve to provide nutrition and oxygen to developing embryo from the mother's blood. It is a disc embedded in the uterine wall and contains villi on the embryo's side of the tissue while blood spaces surrounding the villi are present on mother’s side. Waste products of developing embryo are removed by transferring them into the mother's blood through the placenta.

Question. 46 What are the benefits of using mechanical barriers during sexual act?

(i) It serves a barrier to prevent arrival of sperm to egg and thus avoids unwanted pregnancy.

(ii) It also protects a person from sexually transmitted diseases.

Question. 47 In the given figure label the parts and mention their functions

(a) Production of egg

(b) Site of fertilization

(d) Entry of the sperms 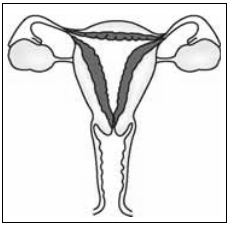 (a) Ovary (production of egg)

(b) Oviduct (site of fertilization)

(d) Vagina (passage for entry of the sperms) 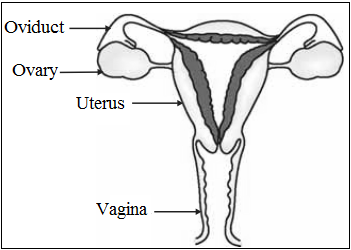 Question. 48 What would be the ratio of chromosome number between an egg and zygote? How is the sperm genetically different from the egg?

Sperms and eggs differ from each other in type of sex chromosome. The sperm contain either X or Y-chromosome whereas an egg will always have an X-chromosome.