In this article you will get CBSE Class 10 Science chapter 9, Heredity and Evolution: NCERT Exemplar Problems and Solutions (Part-I). Every question has been provided with a detailed explanation. All the questions given in this article are very important to prepare for CBSE Class 10 Board Exam 2017-2018. 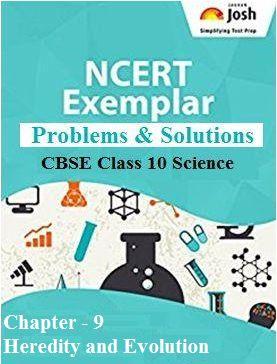 Here you get the CBSE Class 10 Science chapter 9, Heredity and Evolution: NCERT Exemplar Problems and Solutions (Part-I). This part of the chapter includes solutions for Question No.1 to 25 from the NCERT Exemplar Problems for Class 10 Science Chapter: Heredity and Evolution. These questions include only the Multiple Choice Questions (MCQs) framed from various important topics in the chapter. Each question is provided with a detailed explanation.

Find below the NCERT Exemplar problems and their solutions for Class 10 Science Chapter, Heredity and Evolution:

Question. 2 Two pink coloured flowers on crossing resulted in 1 red, 2 pink and 1 white flower progeny. The nature of the cross will be

Explanation:  Cross fertilization is transfer of pollen from one plant to the stigma of flower borne on different plant of same species.

Question. 3 A cross between a tall plant (TT) and short pea plant (tt) resulted in progeny that were all tall plants because

(a) Tallness is the dominant trait

(b) Shortness is the dominant trait

(c) Tallness is the recessive trait

Question. 4 Which of the following statement is incorrect?

(a) For every hormone there is a gene

(b) For every protein there is a gene

(c) For production of every enzyme there is a gene

(d) For every molecule of fat there is a gene

(a) Round and yellow

(b) Round and green

Explanation:  The cross between RR yy and rr YY seeds will obtain RrYy offspring which will exhibit round and yellow phenotype as these traits are dominant one.

Question. 6 In human males all, the chromosomes are paired perfectly except one. This/these unpaired chromosome is/are

Explanation:  Human males are hemizygous for X and Y chromosomes.

Question. 7 The maleness of a child is determined by

(a) The X-chromosome in the zygote

(b) The Y-chromosome in zygote

(c) The cytoplasm of germ cell which determines the sex

(d) Sex is determined by chance

Explanation:  The maleness of a child is determined by presence of Y-chromosome in zygote.

Question. 8 A zygote which has an X-chromosome inherited from the father will develop into a

(c) X-chromosome does not determine the sex of a child

(d) Either boy or girl

(a) Frequency of certain genes in a population change over several generations resulting in evolution.

(b) Reduction in weight of the organism due to starvation is genetically controlled.

(d) Traits which are not inherited over generations do not cause evolution.

Explanation:  The weight reduction due to starvation is environmentally determined factor.

Question. 10 New species may be formed if

(iii) There is no change in the genetic material

(iv) Mating does not take place

Explanation:  Change in genetic material leads to reproductive isolation of population into a new species.

Question. 11 Two pea plants, one with round green seeds (RRyy) and another with wrinkled yellow (rrYY) seeds produce F1 progeny that have round, yellow (RrYy) seeds. When F1 plants are selfed, the F2 progeny will have new combination of characters. Choose the new combination from the following.

Explanation:   The new combination in F2 progeny will be offspring showing phenotype other than aren’t ones (round and green; wrinkled yellow). Hence, the recombinant progeny will be one with round yellow and wrinkled green seeds.

Question. 12 A basket of vegetables contains carrot, potato, radish and tomato. Which of them represent the correct homologous structures?

(a) Carrot and potato

(b) Carrot and tomato

(c) Wings of birds and limbs of lizards are analogous

(d) Wings of bird and wings of bat are homologous

Question. 14 If the fossil of an organism is found in the deeper layers of earth, then we can predict that

(a) The extinction of organism has occurred recently

(b) The extinction of organism has occurred thousands of years ago

Question. 15 Which of the following statements is not true with respect to variation?

(a) All variations in a species have equal chances of survival.

(b) Change in genetic composition results in variation.

(c) Selection of variants by environmental factors forms the basis of evolutionary processes.

Explanation:  Variations that impart reproductive or survival advantage to organisms are being favored during evolution.

Question. 16 A trait in an organism is influenced by

(a) Paternal DNA only

(b) Maternal DNA only

(c) Both maternal and paternal DNA

(d) Neither by paternal nor by maternal DNA

Explanation:  An organism develops from zygote which in turn is product of fusion of male and female gamete.

(a) Two individuals of a species

(b) Two species of a genus

(c) Two genera of a family

Explanation:  Species form the lowest taxonomic category and includes all the organisms that share maximum number of common characters. While moving up in taxonomic hierarchy, number of shared characters get reduced.

Question. 18 According to the evolutionary theory, formation of a new species is generally due to

(a) Sudden creation by nature

(b) Accumulation of variations over several generations

(d) Movement of individuals from one habitat to another

Explanation: Accumulation of variations over several generations serve as raw material on which evolutionary force (natural selection) acts upon to create new species.

Question. 19 From the list given below, select the character which can be acquired but not inherited

(a) Colour of eye

(b) Colour of skin

Question. 20 The two versions of a trait (character) which are brought in by the male and female gametes are situated on

(a) Copies of the same chromosome

Explanation: The two versions of a trait are situated on homologous chromosomes.

Question. 21 Select the statements that describe characteristics of genes

(i) Genes are specific sequence of bases in a DNA molecule

(ii) A gene does not code for proteins

(iii) In individuals of a given species, a specific gene is located on a particular chromosome

(iv) Each chromosome has only one gene

Explanation: Genes are stretches of DNA located on specific locus on a particular chromosome in individuals of a given species.

Question. 23 The number of pair(s) of sex chromosomes in the zygote of humans is

Explanation: Zygote is diploid structure and has one pair of sex chromosome (XX or XY).

Question. 24 The theory of evolution of species by natural selection was given by

Explanation: Darwin proposed the theory of natural selection to explain the process of evolution.

Question. 25 Some dinosaurs had feathers although they could not fly but birds have feathers that help them to fly. In the context of evolution this means that

(a) Reptiles have evolved from birds

(b) There is no evolutionary connection between reptiles and birds

(c) Feathers are homologous structures in both the organisms

(d) Birds have evolved from reptiles

Explanation:  Development of flight feathers in reptilian ancestors of birds lead to evolution of birds (Aves).