In this article you will get CBSE Class 10 Science chapter 15, Our Environment: NCERT Exemplar Problems and Solutions (Part-I). Every question has been provided with a detailed explanation. All the questions given in this article are very important to prepare for CBSE Class 10 Board Exam 2017-2018. 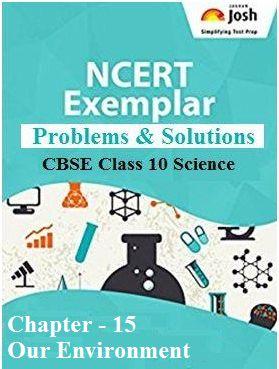 Here you get the CBSE Class 10 Science chapter 15, Our Environment: NCERT Exemplar Problems and Solutions (Part-I). This part of the chapter includes solutions for Question No. 1 to 15 from the NCERT Exemplar Problems for Class 10 Science Chapter: Our Environment. These questions include only the Multiple Choice Questions (MCQs) framed from various important topics in the chapter. Each question is provided with a detailed explanation.

Find below the NCERT Exemplar problems and their solutions for Class 10 Science Chapter, Our Environment:

Question 1. Which one of the following is an artificial ecosystem?

Explanation: Crop field is an agricultural land created by human.

Question 2. In a food chain, the third trophic level is always occupied by

(a) all living organisms

Explanation: All the interacting organisms in an area together with the non-living constituents of the environment form an ecosystem.

Question 4. In the given food chain, suppose the amount of energy at fourth trophic level is 5 kJ, what will be the energy available at the producer level?

Explanation: According to 10 percent law, 90% of the energy captured from the previous trophic level is lost to the environment and only 10 percent is made available to the next trophic level.

In this food chain, at the 4th trophic level, 5 kJ energy is available to the snake

Question 5. Accumulation of non-biodegradable pesticides in the food chain in increasing amount at each higher trophic level is known as

Explanation: Accumulation of non-biodegradable pesticides in the food chain in increasing amount at each higher trophic level is known as bio-magnification.

Question 6. Depletion of ozone is mainly due to

Explanation: Depletion of ozone is mainly due to chlorofluorocarbons (CFCs).

All other substances except chlorofluorocarbon compounds do not contribute to the depletion of ozone.

Explanation: Organisms which synthesise carbohydrates from inorganic compounds using radiant energy are called producers e.g., all green plants.  The producers make the energy from sunlight available to the rest of the ecosystem.

Organisms which consume the food produced, either directly from producers or indirectly by feeding on other consumers are the consumers.

Carnivores and herbivores are types of consumers.

Question 8. In an ecosystem, the 10% of energy available for transfer from one trophic level to the next is in the form of

Explanation: The 10% of energy available for transfer from one trophic level to the next in an ecosystem is in the form of chemical energy. The producers capture the energy present in sunlight and convert it into chemical energy which is passed into onto other trophic levels.

Food chain is a series of organisms through which food energy flows in an ecosystem. Ecosystem constitutes of all the living beings of an area and non-living components of their environment. An ecological pyramid shows the feeding relationship between groups of organisms and also depicts the amount of biomass or energy present at various trophic levels in an ecosystem.

Question 10. Flow of energy in an ecosystem is always

Explanation: The flow of energy in the ecosystem is unidirectional. The energy enters the plants (from the sun) through photosynthesis during the making of food. This energy is then passed on from one organism to another in a food chain.

The energy given out by the organisms as heat is lost to the environment, it does not return to be used by the plants again. This makes the flow of energy in ecosystem 'unidirectional'.

Question 11. Excessive exposure of humans to UV-rays results in

(i) damage to immune system

Explanation: Excessive exposures of humans to UV-rays results in skin cancer and also damage the immune system of the body.

Question 12. In the following groups of materials, which group(s) contains only non-biodegradable items?

Explanation: The substances which can’t be decayed by the action of microbes are non-biodegradable substances e.g., polythene, Bakelite, PVC, detergent, DDT, plastic etc.

Substances which can be decayed by microbes are called biodegradable substances i.e., Wood, paper, grass etc.

Question 13. Which of the following limits the number of trophic levels in a food chain?

(a) Decrease in energy at higher trophic levels

Explanation: There is a loss of energy as we go from one trophic level to the next, this limits the number of trophic levels in a food-chain.

Question 14. Which of the statement is incorrect?

(a) All green plants and blue-green algae are producers

(b) Green plants get their food from organic compounds

(c) Producers prepare their own food from inorganic compounds

Explanation: Producers capture the solar energy and convert it into chemical energy. All green plants and certain blue-green algae which can produce food by photosynthesis come under this category and are called the producers.

Question 15. Which group of organisms are not constituents of a food chain?

Explanation: The flow of energy from one organism to another taking part at various biotic levels forms a food chain. A food chain describes the feeding relationships between the organisms within that ecosystem.

Food chain (ii) is an aquatic food chain so grasshopper cannot be a part of it.

In food chain (iii), wolf, snake and tiger all are carnivores. There is no herbivore to eat grass or herbivore is missing from the chain.

Question 16. The percentage of solar radiation absorbed by all the green plants for the process of photosynthesis is about

Explanation: The green plants in a terrestrial ecosystem capture about 1% of the energy of sunlight that falls on their leaves and convert it into food energy.

Question 17. In the given figure, the various trophic levels are shown in a pyramid. At which trophic level is maximum energy available?

Explanation: The maximum energy is available at first tropic level i.e., T1. After that there is progressive decline in the amount of energy available from producer to higher trophic levels. An average of 10% of the food eaten is turned into its own body and made available for the next level of consumers.

Question 18. What will happen if deer is missing in the food chain given below?

(a) The population of tiger increases

(b) The population of grass decreases

Explanation: If deer is missing in the food chain then there will be no herbivore to consume grass, so population of grass will increase.

Tiger will start to die of hunger, so the population of tiger will decrease.

Question 19. The decomposers in an ecosystem

(d) do not breakdown organic compounds

Question 20. If a grasshopper is eaten by a frog, then the energy transfer will be from

(a) producer to decomposer

(b) producer to primary consumer

Question 21. Disposable plastic plates should not be used because

(a) they are made of materials with light weight

(b) they are made of toxic materials

(c) they are made of biodegradable materials

(d) they are made of non-biodegradable materials

Explanation: Plastics are made up of non-biodegradable material and causes pollution. Hence, use of disposable plastics must be avoided.