In this article you will get CBSE Class 10 Science chapter 14, Sources of Energy: NCERT Exemplar Problems and Solutions (Part-I). Every question has been provided with a detailed explanation. All the questions given in this article are very important to prepare for CBSE Class 10 Board Exam 2017-2018. 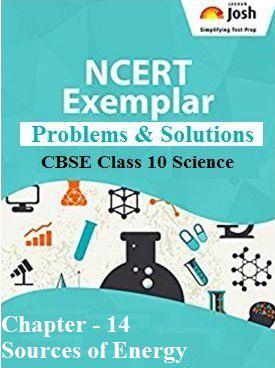 Here you get the CBSE Class 10 Science chapter 14, Sources of Energy: NCERT Exemplar Problems and Solutions (Part-I). This part of the chapter includes solutions for Question No. 1 to 15 from the NCERT Exemplar Problems for Class 10 Science Chapter: Sources of Energy. These questions include only the Multiple Choice Questions (MCQs) framed from various important topics in the chapter. Each question is provided with a detailed explanation.

Find below the NCERT Exemplar problems and their solutions for Class 10 Science Chapter, Sources of Energy:

Question 1. Which of the following is a non-renewable source of energy?

(a) sun leads to heating of upper layer of atmosphere

(b) burning of fossil fuels release oxides of carbon, nitrogen and sulphur in the atmosphere

(c) electrical charges are produced due to friction amongst clouds

Explanation: The oxides of carbon, nitrogen and sulphur that are released by burning fossil fuels form acidic oxides. These lead to acid rain which affects our water and soil resources.

Explanation: Large amount of fossil fuels are burnt every day in power stations to heat up water to produce steam which further runs the turbine to generate electricity.

Question 4. In a hydro power plant

(a) potential energy possessed by stored water is converted into electricity

(c) electricity is extracted from water

(d) water is converted into steam to produce electricity

Explanation: The water stored in dams has potential energy associated with it. Potential energy possessed by stored water is converted into electricity

Question 5. Which is the ultimate source of energy?

Explanation: Sun is the ultimate source of energy as many of the sources (like wind energy etc) ultimately derive their energy from the Sun.

Question 6. Which one of the following forms of energy leads to least environmental pollution in the process of its harnessing and utilisation?

Explanation: Solar energy leads to least environmental pollution in the process of its harnessing and utilization.

In case of nuclear energy, the major concerns of pollution are while storage and disposal of spent fuels where there is always a risk of leakage of radiation.

In case of thermal energy, enormous amount of air pollution is produced.

Even in case of geothermal energy a little amount of pollution is produced.

Question 7. Ocean thermal energy is due to

(a) energy stored by waves in the ocean

(b) temperature difference at different levels in the ocean

(c) pessure difference at different levels in the ocean

(d) tides arising out in the ocean

Explanation: The temperature difference between the water at the surface and water at depths up to 2 km is 20 K (20°C) or more. The warm surface-water is used to boil a volatile liquid like ammonia. The vapours of the liquid are then used to run the turbine of generator. The cold water from the depth of the ocean is pumped up and condenses vapour again to liquid.

Question 8. The major problem in harnessing nuclear energy is how to

(b) sustain the reaction

Question 9. Which part of the solar cooker is responsible for greenhouse effect?

(a) Coating with black colour inside the box

Explanation: Solar cookers are covered with a glass plate which traps infrared radiations (heat) from sunlight and does not allow them to escape. In other words we can say that it provides greenhouse effect.

A black surface absorbs more heat as compared to a white or a reflecting surface under identical conditions.

Solar cookers achieve a higher temperature by using mirrors to focus the rays of the Sun.

Question 10. The main constituent of biogas is

Explanation: Bio-gas is an excellent fuel as it contains up to 75% methane. It burns without smoke, leaves no residue like ash in wood, charcoal and coal burning. Its heating capacity is high. Bio-gas is also used for lighting.

Question 11. The power generated in a windmill

(a) is more in rainy season since, damp air would mean more air mass hitting the blades

(b) depends on the height of the tower

Explanation: Power generated in a windmill depends on the velocity with which wind is moving.

(a) Sun can be taken as an inexhaustible source of energy

(b) There is infinite storage of fossil fuel inside the earth

Fossil fuels inside the earth are present in very limited amount.

Hydro and wind energy plants run with the help of air and do not cause any pollution.

It is very difficult to dispose waste from a nuclear power plant.

Question 13. In a hydroelectric power plant more electrical power can be generated if water falls from a greater height because

(a) its temperature increases

(b) larger amount of potential energy is converted into kinetic energy

(c) the electricity content of water increases with height

(c) Wind hitting at the blades of a windmill causes them to rotate. The rotation thus achieved can be utilised further

Moving air have kinetic energy which on hitting at the blades of a windmill causes them to rotate.

To generate wind power, we require wind at a very high speed. Due to this motion it possess kinetic energy and as such they are capable of doing mechanical work by virtue of its motion.

The energy possessed by the wind is due to its high speed. When the blowing wind strikes across the blades of a windmill, it exerts a force on them due to which the blades of the windmill start rotating. This rotational motion of the blades is used to run the turbine of an electric generator. Thus, the option (b) is the incorrect statement.

(b) Gobar-gas is produced when crops, vegetable wastes etc., decompose in the absence of oxygen

(d) Bio-mass is a renewable source of energy

Explanation: The main ingredient of biogas is methane. Except option (c), all other options are correct.