Get free NCERT solutions for class 10 Economics Chapter 2 - Sectors of the Indian Economy in PDF here. Read the best explained answers for a thorough understanding of the concepts.

NCERT Solutions for Class 10 Social Science Economics Chapter 2 - Sectors of the Indian Economy are available here in PDF format for free download. These accurate and reliable solutions are sure to provide you with the best learning experience. Read the best explained answers to excel in the subjects and score high in your board exams.

Chapter 2: Sectors of the Indian Economy

1. Fill in the blanks using the correct option given in the bracket:

(iv) A _________ proportion of labourers in India are working in the unorganised sector. (large / small)

(vi) The activities in primary, secondary and tertiary sectors are _________. (independent/interdependent)

2. Choose the most appropriate answer.

(a) The sectors are classified into public and private sector on the basis of:
(i) employment conditions
(ii) the nature of economic activity
(iii) ownership of enterprises
(iv) number of workers employed in the enterprise

(b) Production of a commodity, mostly through the natural process, is an activity in ______________ sector.
(i) primary
(ii) secondary
(iii) tertiary
(iv) information technology

(i) Tourist guide
He is appointed by the government, while the other three belong to the private sector.

(ii) Vegetable vendor
He is the only profession that does not require a formal education while the rest are professionally qualified.

(iii) Cobbler
He works in the private sector while the other three work for the public sector.

(iv) SAHARA Airlines
It is a private enterprise, while the rest are owned by the Government of India.

5. A research scholar looked at the working people in the city of Surat and found the following.

Complete the table. What is the percentage of workers in the unorganised sector in this city?

The percentage of workers in the unorganised sector in this city is 70%.

6. Do you think the classification of economic activities into primary, secondary and tertiary is useful? Explain how.

The classification of economic activities into primary, tertiary and secondary is useful as it helps to classify the different occupations that are taken up by the people in the country and gives information on the contribution of different sectors to the growth of the country. It also helps in ascertaining as to which sector of economic activity contributes more or less to the country’s GDP and per capita income.

7. For each of the sectors that we came across in this chapter why should one focus on employment and GDP? Could there be other issues which should be examined? Discuss.

For each of the sectors that we came across in this chapter, one should focus on employment and GDP because these determine the development of a country in terms of its economic growth. A focus on employment and GDP helps determine two important things- per capita income and productivity. Hence, in each of the three sectors, employment rate and status, as well as its contribution to the GDP, help us understand how that particular sector is functioning and what needs to be done for its further growth.

Other issues which should be examined are as follows:

9. How is the tertiary sector different from other sectors? Illustrate with a few examples.

The tertiary sector different from the primary and secondary sectors this sector does not produce goods by itself but the other two sectors produce goods. This sector help in the development of the primary and secondary sectors. The activities under the tertiary sector are an aid or support for the production process. For example, transport, communication, storage, banking, insurance, trade activities etc. Similarly, doctors, teachers, lawyers, tailor, etc., come under the tertiary sector as they provide services rather than material goods. This is why this sector is also termed as the service sector.

10. What do you understand by disguised unemployment? Explain with an example each from the urban and rural areas.

Disguised unemployment is a kind of unemployment in which people seem to be employed but are actually unemployed. This is the situation of underemployment, where people are apparently working but all of them are made to work less than their potential. This situation is also known as Hidden Unemployment. Such a situation arises when more people are engaged in a work than required.

12. "Tertiary sector is not playing any significant role in the development of Indian economy." Do you agree? Give reasons in support of your answer.

13. Service sector in India employs two different kinds of people. Who are these?

The service sector in India employs the following two different kinds of people:

(i) Highly skilled and educated workers like teachers, bankers, IT officials, etc., who are engaged into the high paying services.

14. Workers are exploited in the unorganised sector. Do you agree with this view? Give reasons in support of your answer.

Yes, workers are exploited in the unorganized sector. A few reasons in support of this view are:

15. How are the activities in the economy classified on the basis of employment conditions?

On the basis of employment conditions, the activities in the economy are classified into organized and unorganized sectors.

Organized Sector: t includes the enterprises registered under the Government of India, who have an employee-friendly environment and are provided with various facilities including high wages.

Unorganized Sector: It includes the small and scattered units which largely outside the control of the government. There are rules and regulations but these are not followed in this sector. Jobs here are low-paid and often not regular.

16. Compare the employment conditions prevailing in the organised and unorganised sectors.

In the organised sector, workers enjoy security of employment. They are expected to work only a fixed number of hours. If they work more, they have to be paid overtime by the employer. They also get several other benefits from the employers like paid leave, payment during holidays, provident fund, gratuity, medical insurance, etc.

In the unorganised sector, there is no provision for overtime, paid leave, holidays, leave due to sickness, medical facilities, etc. They do get any other allowances apart from daily wages. Employment is not secure. When there is less work, such as during some seasons, some people may be asked to leave.

17. Explain the objective of implementing the NREGA 2005.

The objective of implementing the NREGA 2005 was to ensure 100 days of employment in a year to all those who are in need of work in the rural areas. It also introduced a scheme of providing unemployment allowances to the people if the government fails to provide employment under this act. The types of work that would help to increase the production from land will be given preference under the Act.

18. Using examples from your area compare and contrast that activities and functions of private and public sectors.

19. Discuss and fill the following table giving one example each from your area.

20. Give a few examples of public sector activities and explain why the government has taken them up.

A few examples of public sector activities are provision of water, electricity, transport, banks, etc. The government has taken them up to make it sure that all the people of the country can enjoy these facilities at affordable prices. These public sector activities are set for the betterment of the public itself. Providing these facilities to its citizens is the responsibility of the Government.

21. Explain how public sector contributes to the economic development of a nation.

The public sector contributes to the economic development of a nation in the following ways:

22. The workers in the unorganised sector need protection on the following issues: wages, safety and health. Explain with examples.

The workers in the unorganised sector need protection:

Wages: Labourers who are employed in the unorganised sector do not get fixed income. They nearly manage to earn their living. They are not employed all through the year. For example, vendors, cobbler, plumber, etc. Proper and fixed wages should be given to these workers so that they can grow and contribute to the growth of the country.

Safety: Workers in the unorganized sector are not provided a safe and healthy working environment. For example, people working in the mining and chemical industries. There is no job security in this sector. Rules and laws should be there to provide such workers with a safe and secure working life.

Health: Workers in the unorganised sector are given no medical security and leaves for sickness. For example, there are no health facilities for the construction workers.

24. The following table gives the GDP in Rupees (Crores) by the three sectors:

(i) Calculate the share of the three sectors in GDP for 2000 and 2013.
(ii) Show the data as a bar diagram similar to Graph 2 in the chapter.
(iii) What conclusions can we draw from the bar graph? 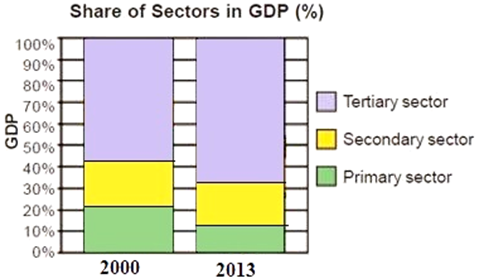 (iii) We can draw the conclusion that the share of the tertiary sector in the GDP has increased by 10%, while that of the primary sector has almost halved. The secondary sector has grown by about 2% in the last 13 years.