In this article, we have provided NCERT solutions for all the questions of CBSE Class 12 English NCERT Flamingo Textbook - Poetry (Chapter 1: My Mother at Sixty Six) 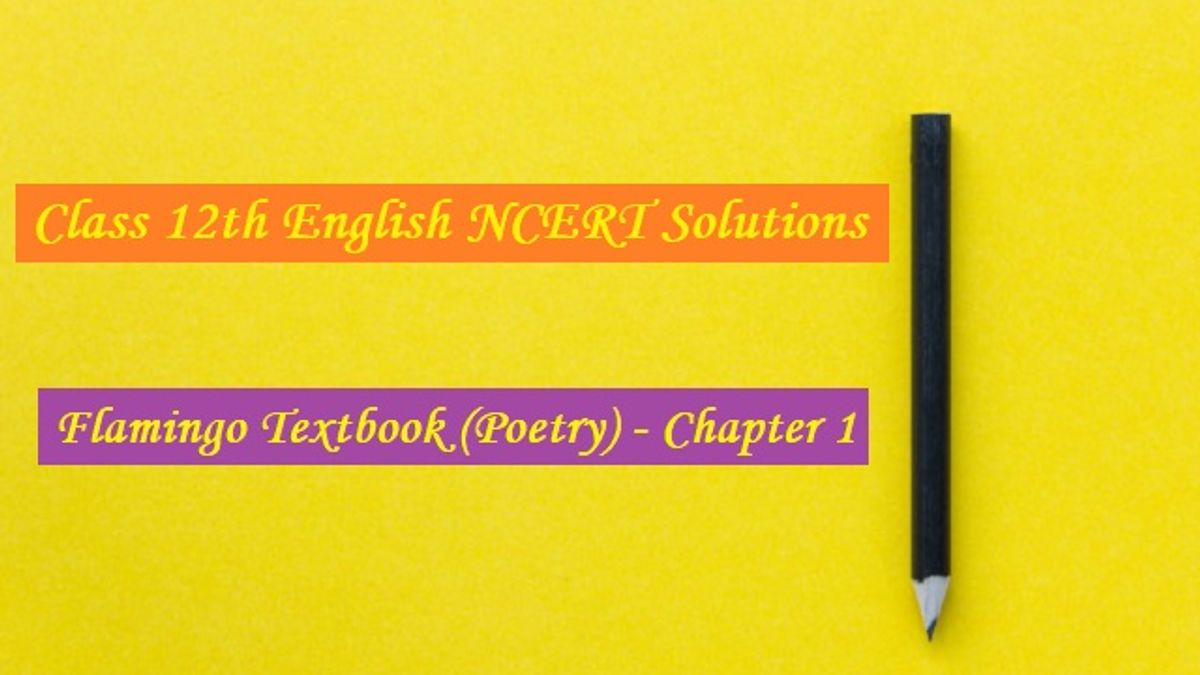 Students of Class 12 can access NCERT Solutions for Chapter 1 (Poetry) of Class 12 English subject (Flamingo Textbook). The NCERT solutions have been provided after a detailed analysis of the marking scheme of CBSE by the subject experts. Chapter 1 of the Flamingo textbook is about the poet’s journey to the airport where she realises about the aging of her mother.  Class 12th students can study the answers provided here to score well in school as well as Class 12th board exams.

Ques: Ageing is a natural process; have you ever thought what our elderly parents expect from us?

Answer: In general, elderly people suffer from isolation episodes and need companionship. Only if we provide them with ample affection, concern, value, and empathy we can shun the cynical attitude they grow towards life. They want their kids to talk to them about their life's happenings and take their advice for making significant decisions. Hence it can quickly rejuvenate their lost vitality. The joy would allow them to live life with excitement.

Ques: What is the kind of pain and ache that the poet feels?

Answer: Whilst leaving the home of her parent, the poet observes the pallid face of her mother. For the poet, her mother's 'ashen' face, stripped of all life and colour, bears a resemblance to a corpse. With pain, she learns that her mother has grown old and is growing close to her death. These thoughts make her recall the terror of her childhood and the sadness of losing her mother. She is saddened by the thought of being separated from her mother. Even her smiles are an indication of her impotence to face what is inevitable.

Ques: Why are the young trees described as 'sprinting'?

Answer: When heading to the airport, the poet stares at the young trees 'sprinting' in an attempt to divert herself from her aging mother's thoughts. The trees seem to fly past the moving vehicle. The sprinting of the trees symbolizes the fast-passing years of human life from childhood to old age. This image, which shows movement and power, is in contrast to that of her old and frail mother who seems to be inactive, sleeping in the car. The 'new' trees represent life, as opposed to the imminent death of her mother.

Ques: Why has the poet brought in the image of the merry children 'spilling out of their homes'?

Answer: The author has provided contrasting descriptions of life and death in the poem. In order to represent liveliness, vigor, fitness, beauty, and joy, she has integrated the picture of the merry children, running out of their houses to play. This image contrasts dramatically with that of her mother, who is nearing her death and has grown frail, withdrawn, poor, and withered. The poet juxtaposed the two pictures to show their contrasts. Childhood marks the start of life while old age marks the end of life.

Ques: Why has the mother been compared to the 'late winter's moon'?

Answer: With that age, the mother of the poet has started to lose all its strength and radiance. The poet uses her mother's resemblance to 'the late winter moon' to suggest her imminent death. Winter, being the last season of the year, is synonymous with dormancy and lifelessness. And, a winter moon is also snow-white in color bearing a strong resemblance to her mother who looks 'wan' and 'pale' to the author, having lost all her power and beauty. Her mother, too, is in her final phase of life.

Ques: What do the parting words of the poet and her smile signify?

Answer: The parting words of the poet, "see you soon, Amma," both signify her farewell to her mother and an attempt to leave her optimistically and cheerfully. These also encourage the poet to empathize with the sense of loneliness that her mother feels when she is aged.

Her smiles represent her impotence in the face of the imminent death of her mother. They express her love and concern for her mother as well as the underlying pain and difficulty she is feeling in coming up with this bitter realization.