Get here the NCERT Solutions for Class 8 Social Science History Chapter 7 with the easiest and the simplest answers. All the questions and answers are available here in PDF format. 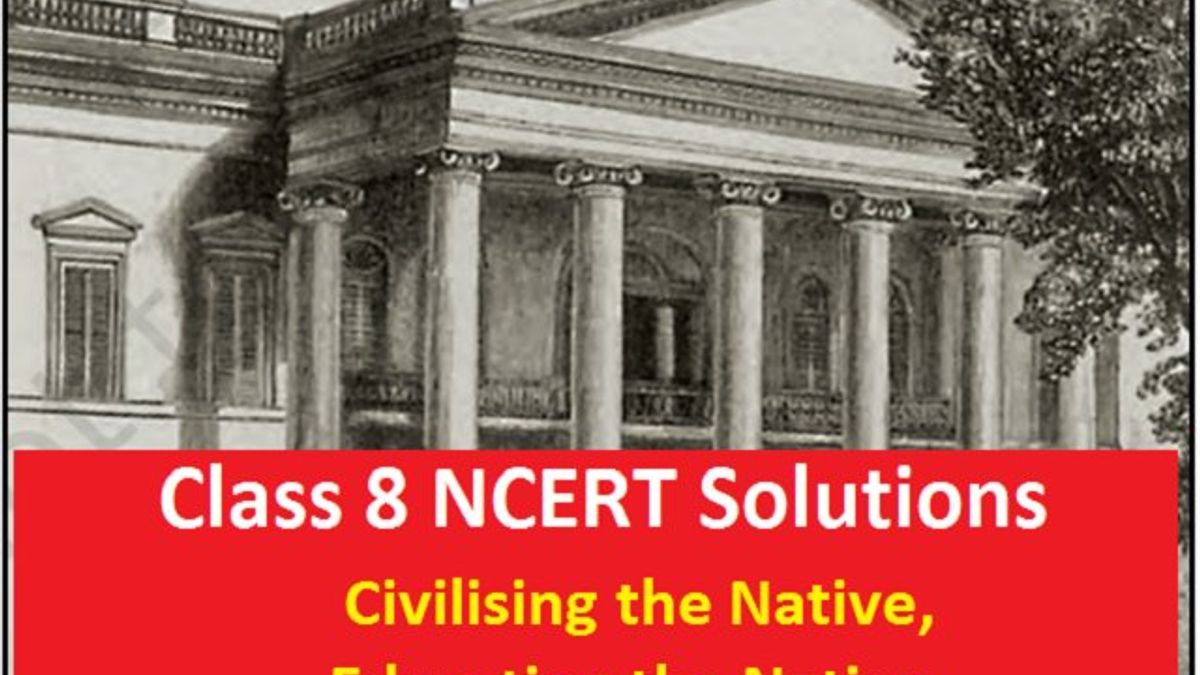 NCERT Solutions for Class 8 History Chapter 7 Civilising the Native, Educating the Nation will provide you with the precise and simple answers to all the questions given at the end of the chapter. These NCERT Solutions are provided for the questions given in chapter 7 of the latest NCERT Book for Class 8 Geography. You can easily download all the questions and answers in PDF format and refer to them to complete your homework assignments and while preparing for the examinations.

(a) James Mill was a severe critic of the Orientalists.

(b) The 1854 Despatch on education was in favour of English being introduced as a medium of higher education in India.

(c) Mahatma Gandhi thought that promotion of literacy was the most important aim of education.

(d) Rabindranath Tagore felt that children ought to be subjected to strict discipline.

(c) False, Mahatma Gandhi considered education as an all-round development of a man be it physical, metal or spiritual. He said that literacy is not the end of education.

(d) False, Rabindranath Tagore felt that childhood ought to be a time of self-learning, outside the rigid and restricting discipline of the schooling system.

3. Why did William Jones feel the need to study Indian history, philosophy and law?

William Jones shared a deep respect for ancient cultures, both of India and the West. He felt that study of Indian history, philosophy and law would not only help the British learn from Indian culture, but it would also help Indians rediscover their own heritage, and understand the lost glories of their past. In this process, the British would become the guardians of Indian culture as well as its masters. William Jones believed that only a new study of the legal texts could form the basis of future development in India.

4. Why did James Mill and Thomas Macaulay think that European education was essential in India?

5. Why did Mahatma Gandhi want to teach children handicrafts?

According to Mahatma Gandhi, literacy in itself was not education. He argued that education ought to develop a person’s mind and soul. Literacy or simply learning to read and write by itself did not count as education. People had to work with their hands, learn a craft. He thought that the child’s education should begin by teaching him/her useful handicrafts and enabling them to create something from the moment they begin training.  Learning handicraft would develop their minds and their capacity to understand.  This would also enable them to know how different things operated.

6. Why did Mahatma Gandhi think that English education had enslaved Indians?

Mahatma Gandhi argued that colonial education created a sense of inferiority in the minds of Indians. It made them see Western civilisation as superior and destroyed the pride they had in their own culture. Gandhi thought that there was poison in English education. And it was sinful, it enslaved Indians and cast an evil spell on them. The English education institutes were entirely charmed by the West and they appreciated everything from the West. The Indians educated from such institutions began admiring British rule. Mahatma Gandhi wanted an education system that could help Indians regain their sense of dignity and self-respect.

Download all the NCERT Solutions for Class 8 History Chapter 7 from the following link: