Update: RRB NTPC Result 2016 to be Announced in Third Week of July

Different RRBs will be declaring RRB NTPC Result 2016 for 18252 posts of various Non-Technical Popular Categories, most probably in the third week of July 2016. 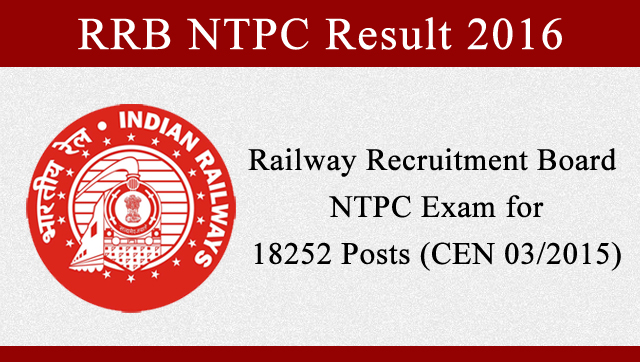 Different RRBs will be declaring RRB NTPC Result 2016 for 18252 posts of various Non-Technical Popular Categories, most probably in the third week of July 2016.

The 56 lakh cadidates appeared in the RRB NTPC Exam 2016 for 18252 various posts in Group C will be able to check their results online on the respective RRBs offical website once result is announced.

For example, the catedites appeared for Station Master Post in RRB Allahabad zone will be able to check their RRB NTPC Result 2016 for the said post on the official website rrbald.gov.in.

Similarly, the other candidates apperead for various other posts or other zone of Railway Recruitment Board (RRB) can check their result on the offical website of the resptive RRB. (Scoll below to see the complete list of RRBs and their official website).

However, candidates who have appeared for the exam can find the entire analysis of the RRB NTPC Exam. Candidates can also get a rough idea about the expected cut off as well.

The much anticipated RRB NTPC Result 2016 is awaited by near about 56 lakh candidates. Approximately 93 lakh candidates had registered for the examination which was held for recruitment against more than 18000 vacancies.

Candidates should note that, the analysis, review and expected cut off marks given below are totally based on the feedback given by the examinees. It may vary from the actual RRB NTPC result 2016. Candidates can use the figures given below as a reference only.

Analysis of the difficulty level of RRB NTPC exam 2016

RRB NTPC exam comprised of 100 objective type questions. The time duration of the examination was 90 minutes. 0.33 marks were deducted for every wrong answer. According to the candidates who have appeared for the exam, the difficulty level of the question paper was moderate.

Candidates are ought to expect a high cut off in RRB NTPC Result 2016. Secondly, the question paper didn’t have any specific sections and the entire question paper was rather a random set. Therefore examinees would have got the time and option for going back and forth the question paper as per their convenience and knowledge. Again reasoning and arithmetic questions required basic level knowledge unlike IBPS or SSC exams, thus making it easier to attempt.

In a nutshell, the RRB NTPC exam 2016 was of moderate difficulty level. Hence high cut off is expected in the general category (70-80 marks). For other reserved categories also the cut off will be slight higher than the usual trend. However, OBC category will have the same (near about) cut off as the general category.

RRB NTPC Result 2016 under confidential process! To be declared soon

Considered to be one of the largest recruitment drives done by the Indian Railways, the examination for recruitment to 18252 RRB NTPC posts was held in the month of March. It has been almost more than 03 months since the completion of the examination. Due to large number of examinees, the Board has announced that the result declaration is ‘under confidential process’.

The RRB NTPC exam was conducted zone wise, hence it is expected that the RRB NTPC result 2016 will be declared by individual zones.

RRB NTPC Result 2016 is scheduled to be declared Zone Wise by different the 21 RRBs under Ministry of Railways. The participated 21 RRBs in the massive recruitment for 18252 posts will be announcing results for each post category soon.

Under RRB NTPC Result 2016, cut-off marks will also declared for the next round of selection process under Railway Recruitment for 18252 posts notified via Notification No. CEN O3.2015.

Answer Key for RRB NTPC Exam 2016 is also expected to released officially by the respective RRB for their written test for each post category.

Next Step and Selection Procedure of RRB NTPC Exam 2016

As per the official notification issued for CEN 03/2015, RRBs to select the candidates on the basis of their performance in the Written Examination, proficiency test and Interview. Since, the written exam is over, the next step of selection procedure of RRB NTPC Exam 2016 will be the proficiency test (wherever applicable) in related trades followed by interview.

It is advisable for the candidates appeared in the RRB NTPC Exam 2016 and waiting for result, to start preparing for next step of selection procedure of RRB NTPC Exam 2016 for 18252 posts. it is very much essential to groom yourself properly before sitting for the examination.

The RRB NTPC result 2016 will be announced for various non-technical category posts. For the notified 18252 posts, the RRB has set different selection procedures for recruitment. For Junior Accounts Assistant, Senior Clerk and Senior Time Keeper the Railway Recruitment Board will conduct typing skill test. Aptitude test will be held for Assistant Station Master and Traffic Assistant posts.

The vacancies were notified for recruitment to various RRB zones across the country. The entire process of scrutinizing the candidates for the non technical posts in RRB (exam, skill test, aptitude test and document verification) will be done by the individual RRBs.

Since the recruitment process will be conducted by individual RRBs it is expected that the RRB NTPC result 2016 will be announced zone wise.

As of now no ‘exact date’ has been announced by the Railway Recruitment Board regarding the RBB NTPC Result 2016. The latest update from the Board was that the result is ‘under confidential process’.

Candidates expecting the RRB NTPC result can find their result as per their zone here: