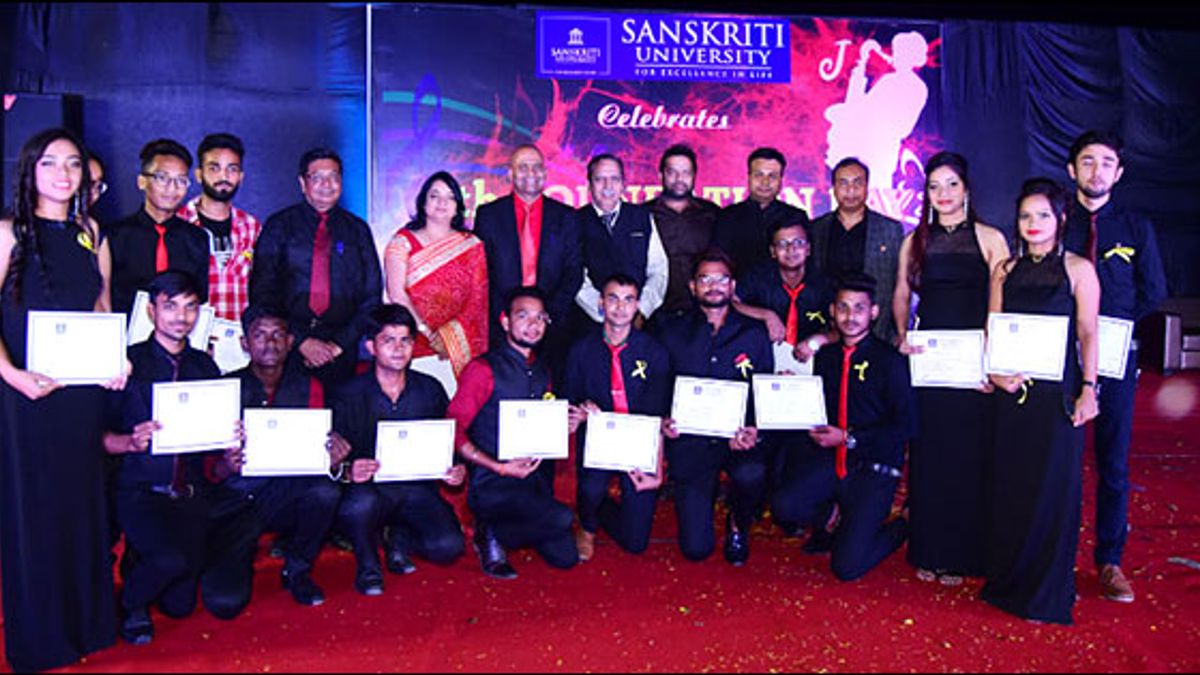 Sanskriti University celebrated its 8th anniversary by organizing a cultural fest at its campus. The 8th Anniversary Celebration of Sanskriti University was marked by a variety of cultural programmes from different states and regions by the students. The dignitaries also addressed the gathering expressing their gratitude towards all the supporters for helping Sanskriti University develop into a world class university in a short-span of time. In addition, the speakers also said the varsity has a long way ahead and that they cannot afford to stop anywhere.

The event was inaugurated with lighting of the lamp by the Sanskriti University Chancellor, Sachin Gupta and Mrs Neha Gupta along with Vice Chancellor Rajesh Gupta and Mrs Poonam Gupta. It was followed by a brief presentation highlighting the key achievements of the University in its 8 year journey. The anniversary celebration was also attended by several other dignitaries including OSD Meenakshi Sharma, Vice Chancellor Dr. Rana Singh, Pro Vice Chancellor Dr.Abhay Kumar, Executive Director P. C. Chhabra and Dean Dr Kalyan Kumar. All the department heads and staff members were also part of the celebration.

Vice Chancellor Rajesh Gupta said, “Sanskriti University is making a concentrated effort to equip its students with the necessary skills and qualities to succeed in the competitive world. In line with this, the varsity has also signed an MoU with MSME and NayatiMedicity – India’s leading health care group. Such efforts will ensure the all-round development of the students of Sanskriti University”. He also reiterated the university’s efforts in expanding its research footprint in various domains.

The 8 Year anniversary celebration of Sanskriti University started with offering prayer to Lord Ganesh. This was followed by a cultural group dance performance by the special education students on Ganesh Vandana.

The audience was also treated to dance and musical performances in both Classical as well as contemporary music forms. This was followed by a fashion show and couple dance performances that became the highlight of the evening and were received with applause from the audiences. At the end of the cultural evening, students from the special education category were also bestowed with awards.

A special presentation from the students from North Eastern States became the highlight of the evening. The presentation was centred on the theme of ‘Unity in Diversity’ and highlighted cultural diversity of the country on a single platform. As part of the programme, audiences were also treated to patriotic dance, and drama called ‘Aafat Mein Jaan’. The evening came to an end with ‘Mr and Miss Fresher’ Competition, where students participated enthusiastically.

Disclaimer: The information provided in this Notification is solely by Sanskriti University., Jagranjosh.com bears no representations or warranties of any kind, express or implied, about the completeness, accuracy, reliability, suitability or availability with respect to the information. Individuals are therefore suggested to check the authenticity of the information.