Staff Selection Commission conducts Combined Graduate Level Exam for the recruitment to the different Group ‘B’ and Group ‘C’ posts.

Staff Selection Commission conducts Combined Graduate Level Exam for the recruitment to the different Group ‘B’ and Group ‘C’ posts. Jagranjosh.com has come up with SSC CGL Exam (Tier-I): Reasoning: Blood Relations: Concepts & Free Online Practice Set. Candidates should include these questions in their course of study. In blood relation and family relation question, a family tree or situation is defined in such a way that mutual relationships of some members are given. The relationship between the other members has to be deduced using general cultural and social rules of family. Here, we provide concepts along with Free Online Practice Set to make the easo of students in cracking blood relation questions in exam.

The entire questions in this section are completely based on Blood Relationship. The candidate should have a sound knowledge of blood relation in order to solve these questions.

Blood Relations can be divided into two sides as follows:

Knowledge of some important relations:

The easiest way to solve the problems based on Blood Relationships would be to draw a tree diagram as follows.

Relation Ships from one generation to next 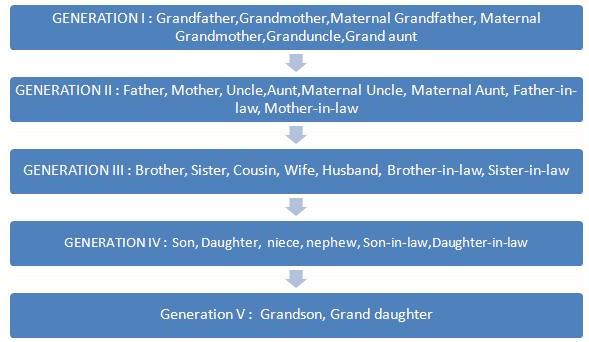 Example1: P’s father’s Sister’s father is Q. How is Q related to P?

Example2: Examine the following relationship among members of a family of six persons - A, B, C, D, E and F.

Which one of the following inferences can be drawn from the above?

(c) D is the granddaughter of F

Solution: (b) it is clear that there are three males and three females in the family. Clearly A, E and B are males. So, C, D, and F are females. Also given that D is the mother of one boy and one girl. So, A and D form a couple having two children, namely B and C. Hence A is the husband of D.

Which of the following means that N is the mother of O?