SSC CHSL 2021 General Intelligence and Reasoning Mock Test & Important Questions: Practicing Mock Tests can help you in many ways in your exam preparation. We have covered all the relevant topics from both verbal and non-verbal reasoning segments as both are important from the SSC CHSL Tier-I Exam perspective. So start your preparation for General Intelligence and Reasoning Section with this 1st Mock Test.

SSC CHSL 2021 General Intelligence and Reasoning Mock Test & Important Questions: If practiced well, General Intelligence and Reasoning can become one of the highest-scoring sections of the SSC CHSL Tier-I Exam. For your practice, we have designed mock papers that will test your ability to think and solve problems. The questions asked in this section are mainly the brain teasers and sometimes can be quite tricky to answer.

We have covered the following two major categories of General Intelligence & Reasoning Section in this mock test:

So, let’s start the practice with the 1st General Intelligence & Reasoning Mock Test. You must try to finish all the 25 questions within 20 minutes time duration. After attempting all the questions, you can assess your performance by checking answers along with their Answers are given latter in this article.

Direction (3-4): Choose the odd numeral pair/group in each of the following questions:

7. If OUGHT is coded as ABCDE in a certain language. How can TOUGH be coded in the same language?

8. If BITER is coded as KLMNO in a certain language. How can TRIBE be coded in the same language?

9. Pointing to a man in the Photograph Kabir said, ‘His son’s mother is the only daughter in law of my mother’.  Who is the person in photograph to Kabir?

• I is in one of the two seats in the middle.

• M is the only one sitting between I and L.

13. Study the following number sequence and  answer the questions given below it.

How many odd numbers are there in the sequence each of which is immediately followed by to an odd number?

Direction (14-15): Answer the questions based on the number sequence below

14. If the first and last digits of each number are interchanged what would be the second largest number?

15. Which number in the sequence has the highest sum of its digits?

16. Arrange the words given below in a meaningful sequence.

17. Statement: Some leaders are as corrupts as Mahesh.

a) Mahesh is corrupt.

b) Most of the leaders are corrupt.

c) Mahesh is not corrupt.

d) Leaders are not corrupt.

18. What replaces the question mark? 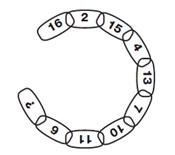 21. In the following question, choose the correct mirror image from the alternatives (a), (b), (c) and (d), when mirror is placed on the line AB.

22. Spotting out the embedded figures 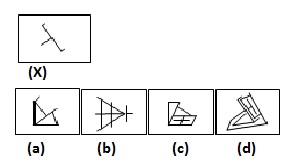 24. In the following example, find the one which resembles the pattern formed when the transparent sheet, carrying a design is folded along the dotted line along the direction shown by the arrow. 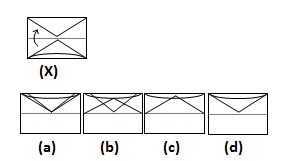 25. Choose the box that is similar to the box formed from the given sheet of paper (X).

Explanation: In all the pairs except 25-54, the second number is the square of one-third of the first number.

Explanation:  Except d, the rest of combination of antonyms.

See the bold part. It makes a series as follows:

Explanation: Here the series is

Explanation: The person is Kabir himself.

Explanation: Rahul and Govind will finish on a straight line and the distance between them will be = 40 + 60 = 100m.

Explanation: Clearly, C is the third letter in the word “ACCELERATION” as well as in the English Alphabet. Therefore, there is only one such letter.

Explanation: Correct Answer is Option b)

Explanation: The statement clearly tells Mahesh is corrupt but nothing can be said about the leaders.

Explanation: Moving clockwise, around alternate segments in the chain, one sequence decreases by 1, 2, 3 and 4 each time, while the other increases by 2, 3, 4 and 5.

Explanation: Coding pattern is (2n + 1) where n = position of alphabet in alphabetic order.

Explanation: Correct answer is option b)

Explanation: The figure X is embedded in option (d).

Explanation: After folding the paper we will get option (d) as a answer.

Explanation: Correct answer is Option b)

We have covered the following topics in the above Mock Test-1:

The difficulty level of the above mock test was ranging between easy to moderate level and a good score would lie between 20 to 23 marks. Don’t stop your practice until you achieve efficiency and accuracy. Try another mock test here – General Intelligence and Reasoning.