SSC decided to omit Interview for Group B and C posts

SSC decided to do away with the personal interview round for all the Group B and Group C posts. The written examination candidates would be shortlisted in the ratio of 1:20, which can go further up to 1:25. The competition is expected to get higher after the move of the commission.

The Staff Selection Commission in their recent meeting held on 11 March, 2016, decided to do away with the personal interview round for all the Group B (Non- Gazetted) and Group C (nontechnical) posts. The decision has come as a result of Prime Minister Modi’s announcement of abolishing personal interview round from all the lower rank posts, in various government ministries and departments, last year. 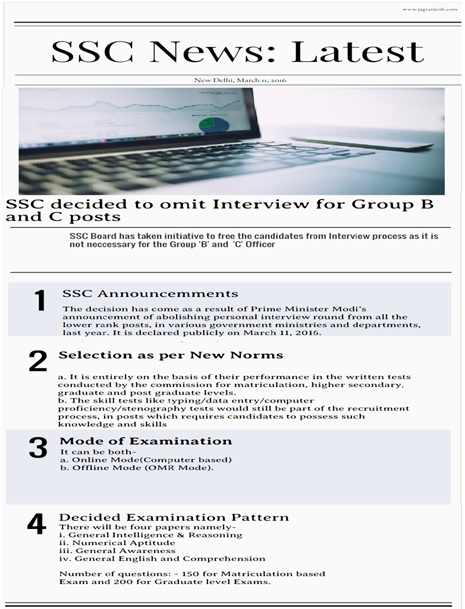 Selection as per New Norms-

According to the new norms of selection,

a. The Group B and C candidates would be selected entirely on the basis of their performance in the written tests conducted by the commission for matriculation, higher secondary, graduate and post graduate levels.

b. The skill tests like typing/data entry/computer proficiency/stenography tests would still be part of the recruitment process, in posts which requires candidates to possess such knowledge and skills.

Though, the tests would only be qualified in nature and the final selection of the candidates would be made based on their performance in the written test.

The written test would be carried out both

i. Online (Computer based)
ii. Offline (OMR based) for the various posts with different educational qualifications.

The examination scheme for the various examinations conducted under SSC has also undergone a significant change. Due to the dependency in the written examination, it is expected that the difficulty level of the written test would go higher.

There would be four papers in all the examinations namely,

The SSC examination of matriculation candidates would contain 150 questions in total while for Higher Secondary level and Graduation level examination, the number of questions would be 200.

Important:- The written examination candidates would be shortlisted in the ratio of 1:20, which can go further up to 1:25. The competition is expected to get higher after the move of the commission.