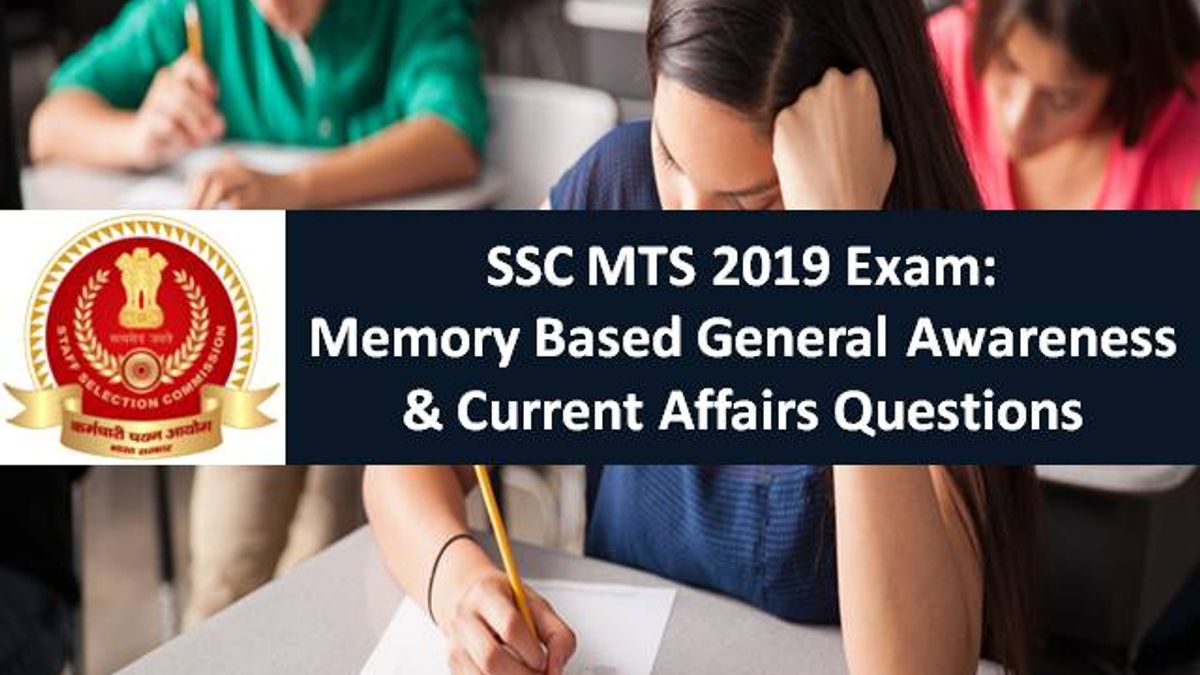 SSC MTS Paper-1 2019 Computer Based Exam (CBE) has been started from 2nd August and will last till 6th September 2019. In this article we are going to share the important Memory Based General Awareness & Current Affairs Questions as per the feedback shared by the candidates who have appeared for SSC MTS 2019 Exam. Candidates are advised to definitely cover these questions for scoring high marks in the Exam.

Let’s have a look at the General Awareness & Current Affairs Questions that are being covered in the SSC MTS Paper-1 2019 Exam:

1. Article 343 of Constitution of India is related to:

Ans: Official Language of the Union government shall be Hindi in Devanagari script

2. How many Digits are there in Debit Card Number?

3. As per 2011 Census, what is the population density per square kilometer?

4. War and peace book written by:

5. Who has presented the budget maximum number of times?

7. When was the National Flag of India adopted in its present form?

9. Who was the 5th guru in Sikh Religion?

10. Which element present in water can cause cancer?

11. India UK relationship has included whom as one of the top women of India?

12. Qutubuddin Aibak belonged to which dynasty?

13. How many times has the emergency been implemented in India?

14. Who is the Minister of Water Resources?

16. Who is the chairman of the lokpal committee?

17. Which State has the longest coastline in India?

18. Time trial is used in which sport?

19. Which river falls in Arab Sagar?

20. How many Schedules are there in the Indian constitution?

1. Who was the first Indian Woman to Swim across Indian Channel?

2. Pin Valley National Park is located in which State?

3. When was Quit India Movement happened?

6. Who is the Director of Mission Mangal Movie?

7. Where is Hawa Mahal situated?

8. Bhavai Dance is a Folk Dance of which State?

9. Citizenship comes under which article of Constitution of India?

11. Rajiv Gandhi Airport is located in:

14: Who built the Kailash Temple at Ellora?

15. What is the currency of France?

17. Right against Discrimination comes under which section of Constitution of India?

18. How many High Courts are there in India?

19. Neelkanth or Indian Roller is the State Bird of how many States?

21. Headquarters of BRICS is located in:

22. When was the Air Transport started in India?

23. Who became the Nawab of Bengal after Alivardi Khan?

24. Who is the President of South Africa?

25. Who was the First PM of Pakistan?

28. Who is the state governor of Bihar?

29. Which instrument is used to measure Humidity?

30. Mosses belong to which phylum?

32. Which committee recommended the Fundamental Duties of citizens?

33. Saraswati Samman is related to which field?

34. Who is the founder of blue revolution?

Ans: 82.5° E longitude, from a clock tower in Mirzapur

39. Directive Principles of State Policy (DPSP) is borrowed from:

Ans: India borrowed the DPSP from Irish Constitution of 1937