General Intelligence & Reasoning Section will consist of 25 questions (25 marks) in SSC MTS 2019 Exam. So for the ease of the candidates we have designed mock test which will test your Reasoning & Analytical Skills and understanding of Verbal & Non-Verbal Reasoning Concepts.

Directions (1 - 2): In each of the following questions, there is a certain relationship between two given words on one side of (: :) and one word is given on another side (: :) while another word is to be found from the given alternatives, having the same relation with this word as the words of the given pair bear. Choose the correct alternative.

Directions (3 - 4): Some groups of letters are given, all of which, except one, share a common similarity while one is different. Choose the odd one out.

Directions (5 - 6): Choose the next number in the series from the options below:

9. Introducing ‘Rakesh’, Raj said, “he is the son of the only son of my grandfather”. How is ‘Rakesh’ related to Raj?

From the given information we get the following.

Hence, Preeti is the slowest runner.

Who is good in Chemistry, Economics and Mathematics, but not in Computer Science? (L2)

Explanation: According to the data, we infer

13. In the following letter series, some of the letters are missing which are given in that order as one of the alternatives below it. Choose the correct alternative.

14. Read the following information carefully and Answer: the questions given below it:

Which of the following represents that’ N’ is the son of ’P ‘?

15. Find the word which cannot be made from letters of the given word.

Explanation: Since Shekhar and Prabhat exchange places, so Shekhar’s new position is the same as Prabhat’s earlier position and vice versa. This position is 17th from the right and 10th from the left. Therefore, Number of boys in the row = (16 + 1 + 9) = 26.

Pinki has 5+ Chocolates than Meenu.

Meenu has 2 times the chocolate that Anu has.

Therefore, Pinki has the maximum number of chocolates.

Statements: Some pigeons are eagles. All eagles are sparrows. Some sparrows are not pigeons.

Explanation: Only I is definitely true.

19. In the following question, choose the correct mirror image from the alternatives (a), (b), (c) and (d), when mirror is placed on the line AB. 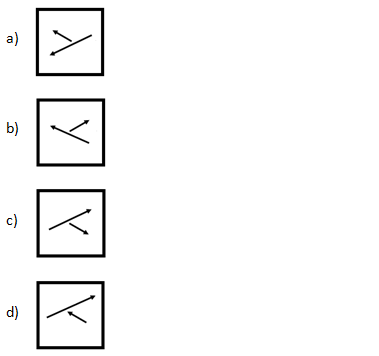 Explanation: Option b) is correct.

20. Choose a figure which would most closely resemble the unfolded form of the last question figure.

Explanation: Option b) is correct.

21. In the following question, a part of question figure is missing. Find out from the given Answer: figures (a), (b), (c) and (d), that can replace the ‘?’ to complete the question figure.

22. In the question given below there are four figures given out of which three are similar or related in some manner. Find the figure which is odd one out.

23. Which letter replaces the question mark?

24. Two positions of a cube are as follows.

Point out which number will be on the top if number 3 is at the bottom. 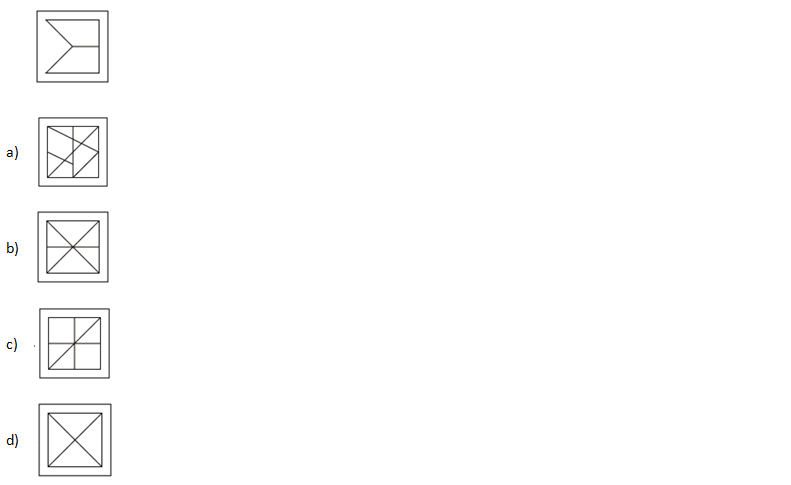 Explanation: The correct Answer: is option b).