In each of the questions given below which one of the four answer figures should come next, if the sequence were continued:

3.The following question consists of a figure containing groups of letters with two terms missing represented by ‘?’. Choose the terms that can best replace the missing terms. 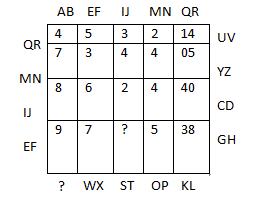 4.Select the missing number from the given responses.

Fig 1, 9x9-5x3= 66, similarly figure 2 and 3 to give 51
Alphabet series:
All the alphabets beginning from figure 1 are evenly placed after 5 positions of the preceding
Alphabet. Like,

From the given equilateral triangle below, A, B and C run along the sides in clockwise direction and stop after covering 1 ½ sides. Which of the following statements is true?

The new positions are shown below:

6.A woman wants to go to the market to the east of her home and leaves her home towards south at 11 am. She reaches a junction from where the road to the left takes her to the grocer and one on the right takes her to the salon. If she goes straight she could reach office in 10 minutes. In which direction is the market with respect to her position?

7.Who got the highest marks in Reasoning?

8.Which of the following students has scored the least in Reasoning? 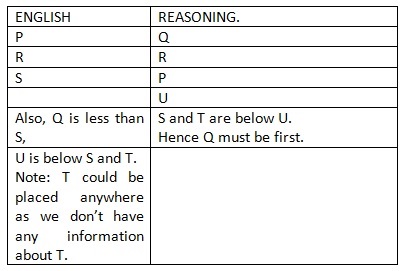 Directions (Questions 9 - 10): Read the following information carefully and answer the questions given below it:

9.Which of the following means that N is the maternal uncle of M?