Which animal is capable of twisting its neck to nearly 360 degrees?

This article will make you familiar with the animal that can twist its neck to nearly 360 degrees.

Q. Which animal is capable of twisting its neck to nearly 360 degrees? 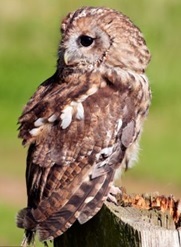 Ans. The answer is ‘Owl’. Owls have fixed eye sockets, which means they can’t move their eyeballs. But this lack is compensated by their ability to look completely over each shoulder by turning  their heads 270 degrees which is near to a whole angle of 360 degrees. Moreover, twisting head to such a large angle does not cause any internal bleeding or breakage as it would do in other organisms including human beings. Actually, this wide range of motion in owls is facilitated by the presence of multiple vertebrae (the small bones that make up the neck and spine) along with a special blood-pooling system that collects blood to power their brains and eyes when neck movement cuts off circulation. The alternative blood vessel routing and air-cushioned vessel casings present inside their necks prevent any rupture and stroke during violent head motions.