Why you should leave Bank PO Job for SSC CGL?

The most pertaining issue with the Bank PO in various PSU banks is the workload that they are facing. Each of the banks is trying to multiply their business and are willing to expand its territory. In order to do so, the banks are giving adequate pressure to the probationary officers to perform and fulfill targets. On the contrary, the SSC jobs are more timely and balanced in workload.

Both Banking sector and other government sector jobs interest many people as their career option. A large number of candidates prepare themselves for the competitive examination held for both banking sector and in different government ministries and departments. The recruitment is made by a central authority for various branches all throughout the nation. The Banking industry has seen a huge growth in the last decade and considerably the amount of recruitment has increased. Opening up of new branches in the rural and semi-urban areas of the nationalized banks are resulting in huge number of candidates being recruited. The recruitment is made for specialist officers, probationary officers and clerks on a larger scale. Candidates, who have passed their Graduation Degree in any stream, are eligible to apply for the posts offered by the concerned authority.

SSC on the other hand has increased their frequency of recruitment to various government ministries and departments in the last few years. Many of the aspiring candidates are going through both the IBPS and SSC conducted examinations, in order to secure their future by getting a government job. But, there are factors that demarcate the nature of job profile of these two sectors. The Bank PO post is often termed as the respectable post in the banking sector that many candidates choose ahead of the SSC offered jobs. They should have a look at the prospect of the SSC jobs before joining as Bank PO. This article would help them understand the difference between the two. 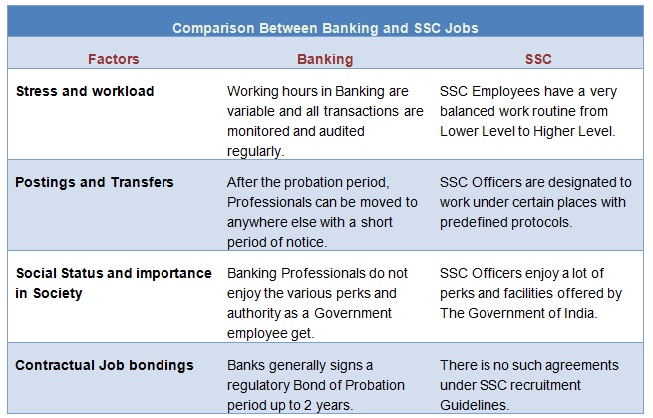 Conclusion:
There are pros in the banking PO job as well, like the better salary structure and fast career growth option, but taking all the points collectively one would talk in favour of the SSC jobs. The overall job satisfaction and career stability is the reason why candidates should move over to SSC jobs.

Unavoidable precautions that must be followed for SSC Exams