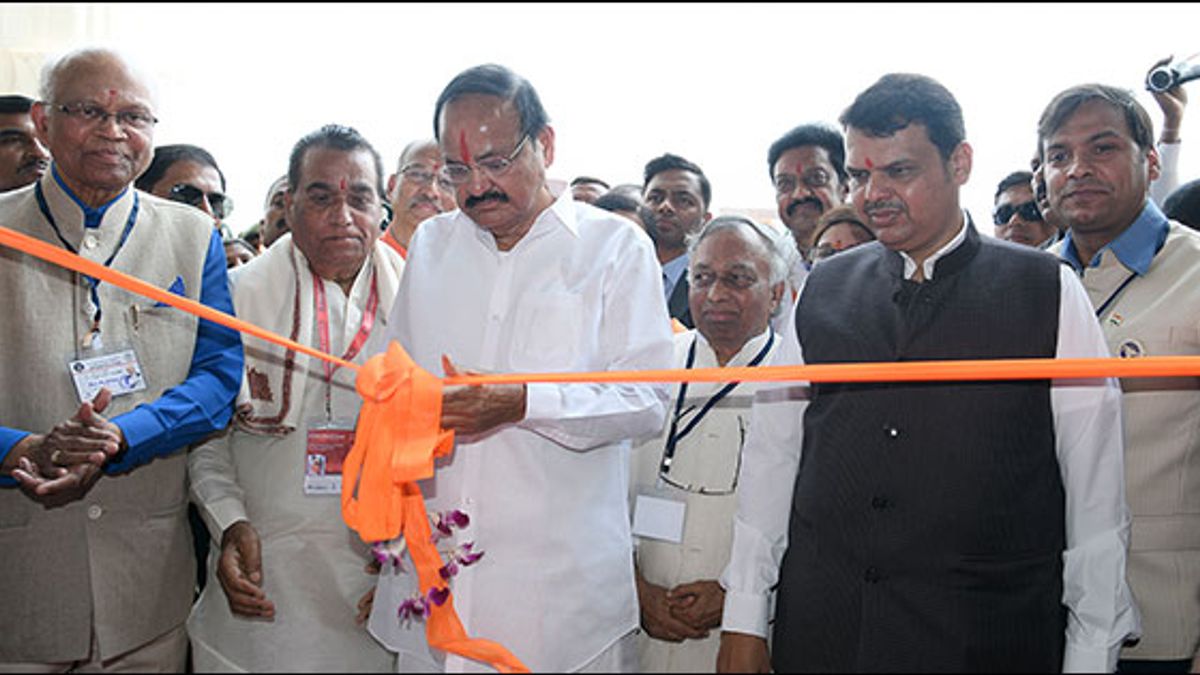 Violence is not the solution said M. Venkaiah Naidu at the inauguration of MIT-WPU’s Philosopher Saint Dnyaneshwara World Peace Dome and World Peace Parliament Pune, October 02, 2018: MIT World Peace University Pune and MIT – ADT University Pune jointly organised the Four day World Parliament of Science, Religion and Philosophy which was inaugurated today at the Loni Kalbhor campus near Pune. The conclave began on the 150th anniversary of Late Mahatma Gandhi and will get over on October 5, 2018.

The Vice President of India was the chief guest on the occasion while Maharrashtra Chief Minister DevendraFadnavis was the guest of honour.

Curtain unveiling of world peace dome and ribbon cutting was performed at the hands of Vice President M. Venkaiah Naidu.

Describing the dome as another wonder of the world, Naidu said, “The World Peace Dome is not only the biggest in history but is the biggest idea as well. It is the idea of restricting the world turning into a tomb. Even after conquering the whole world, the only thing a man yearn is the peace of mind.”

Talking about the Hindu culture and its high values of living, he further said, “Share and care is the core of Indian Philosophy. Hinduism is a way of life, culture is way of living and thus India represents the way of living.”

Appreciating the initiative taken by Prof Dr Vishwanath Karad for bringing the whole world together for a good cause of Peace and Humanity, Naidu said, “This day is historic and I respect the cause and work done by Prof DrVishwanathKarad. India has always welcomed all religions, and he is proving it by his work. Prof Dr  Vishwanath Karad had seen this vision in 2005 for World Peace and he is still working in this direction. I would like to say, all students and people of the nation must visit this dome and the library which has millions of books.”

Remembering Mahatma Gandhi on his 150th Anniversary, Naidu said, “Gandhiji always had emphasized on truth, simplicity, kindness, peace and non-violence. He gave us the greatest weapon to win in any situation. Simplicity is the Gandhian thought. Five things a man should never forget – Mother, Native Place, Mother Tongue, Motherland and Guru.”

Maharashtra Chief Minister DevendraFadnavis said, “This dome is the greatest contribution in the history of the world. The world is changing and so is India which is taking strides to bring harmony and peace in world. Saint Dnyaneshwar lived for a very short span of life but he contributed his whole life for eace and the harmony in the world. Saint Dyaneshwar always believed that it is the evil elements in humans must cease to exist. Today the people gathered here are an inspiration to the world for the humanity and peace.”

Dr. Vishwanath Karad said, “World lacks the peace of mind when everything is available at one click in 21st century. This dome includes 54 statues of philosophers, saint, and scientists. No crane machines were used to build this dome. Statue of God Ram in the center of the statues giving the message of vishva shanti and humanity.”

Dr. Vijay Bhatkar, who is better known as Father of PARAM Super Computers said on the occasion, “This is the largest meet I’ve seen where Philosophers, Scientists, Saints and messenger of peace have gathered in harmony for humanity. Without understanding of Science, there is no religion. We will have to stand together to be the cause of world peace.”

Dr. Raghunath Mashelkar, Padma Vibhushan and eminent scientist said, “This dome is not the biggest dome in size but it has the biggest message for the world. World is facing huge problems like terrorism, global warming etc. Artificial intelligence, Advance machineries are there that’s why there is the need of emotional intelligence in the world which can be brought by maintaining peace and harmony.”

He thanked Prof Dr. Vishwanath Karad and said, “VishwanathKarad has given so much in the field of education but this is the greatest gift to the whole world.”

Rahul Karad, Executive President of MIT-WPU said, “Prof DrVishwanathKarad is the soul creator of this World Peace Dome. We did not have a dream to make the biggest dome but to make it ideal for the representation of humanity. Karad appealed to recognize this dome as national and international prominent monument.”

During the conclave, the world's largest dome which has been given finishing touches, formally housed a Saint Dynaneshwar World Peace Prayer Hall and World Peace Library. 54 bronze statues of global saints, religious leaders, scientists, philosophers and educationists got installed in this super structure. Vote of thanks was given by Prof Mangesh Karad.

Session One – To add

Pune, 2nd Oct.: “Value based education has been the wish for most nations and specially India. It refers to education whereby the outcome adds values to the learner and not just learning because it is routine or mandatory to do so. Therefore the importance of value based education is that it builds various qualities of honesty, strength and humility in a person in regard to their social, moral and spiritual behaviour ”, Said, Vice Chancellor of Amity University, Gurugram, Haryana Dr. P.B. Sharma.

He was delivering a speech as the Chief Guest of World Parliament of Science, Religion and Philosophy. This four days Parliament has been organized at the LoniKalbhor Campus of MIT- ADT University in Pune.

P.B. Sharma praised the initiatives for world peace and said, “If you have purest of pure mind then only you are capable to grab knowledge.  He also added that Peace is our gift to each other. One little person, giving all of her time to peace, makes news. Many people, giving some of their time, can make history.

C K Bharadwaj said, “The earth is too small a star and we too are brief visitors upon it for anything to matter more than the struggle for peace. Values based education plays an important role in strengthing the spiritual behavior of an individual. A spiritual person normally associated with good qualities in life such as honesty, simplicity, humbleness and others.

Dr. Scott Herriot said, “When I say it’s you I like, I’m talking about that part of you that knows that life is far more than anything you can ever see or hear or touch. That deep part of you that allows you to stand for those things without which humankind cannot survive. Love that conquers hate, peace that rises triumphant over war, and justice that proves more powerful than greed.”

Shri. Hiroo Saionji said, “If we are aware of our life…, our way of looking at things, we will know how to make peace right in the moment, we are alive.”

Prof. Carolyn Jenkins said, “Peace has to be created, in order to be maintained. It is the product of faith, strength, energy, will, sympathy, justice, imagination, and the triumph of principle. It will never be achieved by passivity and quietism.”

Mr. Gautam Bapat Compered the function. R Mashelkar gave the vote of thanks.

Disclaimer: The information provided in this Notification is solely by MIT World Peace University Pune., Jagranjosh.com bears no representations or warranties of any kind, express or implied, about the completeness, accuracy, reliability, suitability or availability with respect to the information. Individuals are therefore suggested to check the authenticity of the information.