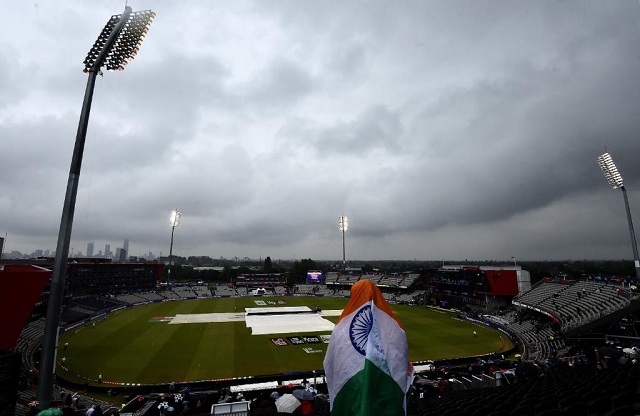 The Manchester weather forecast for 10th July predicts light rain in the morning and then it would be largely cloudy during the day. However, rain is expected to interrupt play in small intervals later in the day. The India vs New Zealand, first World Cup semi-final is likely to be affected by rain on the reserve day as well. The India vs New Zealand play was called off on the original match day due to poor weather. The match will be resumed from where it was left off yesterday. New Zealand was 211/5 with Ross Taylor batting at 67 and Tom Latham on 3 when the rain forced players to go off the field. The umpires reviewed the situation for the next few hours before deciding that the weather was too poor to continue the match and that it would be resumed on the reserve day, 10th July.

What is a reserve day?

What will happen if reserve day for semi-finals and final gets washed out?

What happens if India vs New Zealand reserve day also gets washed out?

If no play happens on the reserve day as well then, India will automatically qualify into the World Cup finals on the basis of its points. India currently sits on the top of the world cup points table with 15 points, while New Zealand is placed fourth with 11 points.

What is the ticket refund policy in case of washout?

Full ticket refund will be done the number of overs played are 15 or less and 50 percent of the ticket amount will be refunded if 15.1-29.5 overs are played.

The weather has been a huge concern during the ongoing ICC World Cup 2019. Four matches have been abandoned due to rain already, including India vs New Zealand group stage match at Trent Bridge Nottingham.