NASA’s InSight explorer successfully touched down on Mars on November 26, after an almost seven-month journey through deep space. This is the eighth time in human history that NASA has executed a successful landing on the red planet and the first in six years. 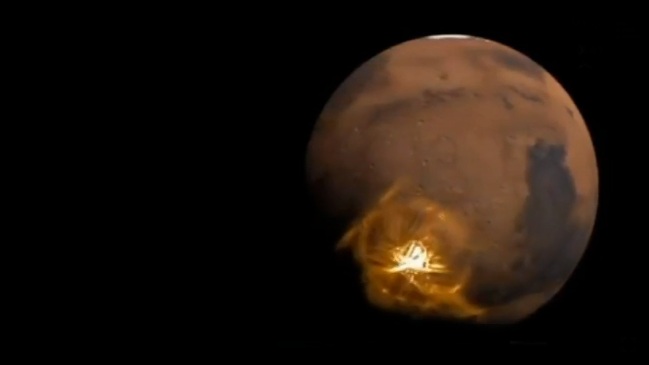 NASA’s InSight explorer successfully touched down on Mars on November 26, 2018, after an almost seven-month journey through deep space. This is the eighth time in human history that NASA has executed a successful landing on the red planet and the first in six years.

The landing kicks off a two-year mission for the InSight lander to study Mars' deep interior. Operated by NASA, the explorer is built by scientists in the United States, France and Germany.

• InSight stands for Interior Exploration using Seismic Investigations, Geodesy and Heat Transport. It has been designed to study the "inner space" of Mars: its crust, mantle, and core.

• The lander’s two-year mission will be to study the deep interior of Mars to learn how all celestial bodies with rocky surfaces, including the Earth and the Moon, were formed.

• It was launched from Vandenberg Air Force Base in California on May 5, 2018. It touched down November 26 near Mars' equator on the western side of a flat, smooth expanse of lava called Elysium Planitia.

• The explorer will carry out mission objectives on the surface of Mars for a period of two years (one Martian year, plus 40 Martian days) till November 24, 2020.

• The landing signal was relayed to NASA's Jet Propulsion Laboratory (JPL) in Pasadena, California, through one of NASA's two small experimental Mars Cube One (MarCO) CubeSats, which launched on the same rocket as InSight and followed the lander to Mars.

• They are the first CubeSats sent into deep space. After successfully carrying out a number of communications and in-flight navigation experiments, the twin MarCOs were set in position to receive transmissions during InSight's entry, descent and landing.

The stretch from the moment a spacecraft hits the Martian atmosphere to the second it touches down on the red planet’s rusty surface is considered extremely crucial, as scientists have no control over the process. More than half of all missions don’t make it safely to the surface.

However, in the case of InSight, the whole sequence of entry, descent and touching down on the surface took only six-and-a-half minutes.

During the short span of time, InSight had to autonomously perform thousands of operations such as separate the heat shield, deploy the legs, activate the radar, fire the retrorockets and orient for landing and it had to them flawlessly and by all the indications, it was able to do just that.

The confirmation of a successful touchdown is not, however, the end of the challenges of landing on the Red Planet.

InSight's surface-operations phase began a minute after touchdown. One of its first tasks was to deploy its two decagonal solar arrays, which will provide power. The process began 16 minutes after landing and took another 16 minutes to complete.

The verification of the successful deployment of the spacecraft’s solar panels will come from NASA's Odyssey spacecraft, which is currently orbiting Mars.

The deployment of the spacecraft’s solar panels is significant, as it is solar powered.

InSight will begin to collect science data within the first week after landing, though the teams will focus mainly on preparing to set InSight's instruments on the Martian ground.

At least two days after touchdown, the engineering team will begin to deploy InSight's 5.9-foot-long (1.8-meter-long) robotic arm so that it can take images of the landscape.

Within two or three months, the arm will deploy the mission's main science instruments, the Seismic Experiment for Interior Structure (SEIS) and Heat Flow and Physical Properties Package (HP3) instruments.

The InSight is being managed by the Jet Propulsion Laboratory (JPL). The explorer is a part of NASA's Discovery Program, managed by the agency's Marshall Space Flight Center in Huntsville, Alabama.

While the MarCO CubeSats were built and managed by JPL, Lockheed Martin Space Systems built the InSight spacecraft, including its cruise stage and lander and supports spacecraft operations for the mission.

The mission is supported by a number of European partners, including France's Centre National d'Études Spatiales (CNES) and the German Aerospace Center (DLR).

The CNES and the Institut de Physique du Globe de Paris, provided the SEIS instrument, with significant contributions from the Max Planck Institute for Solar System Research in Germany, the Swiss Institute of Technology in Switzerland, Imperial College and Oxford University in the United Kingdom and JPL.

On the other hand, the DLR provided the HP3 instrument, with significant contributions from the Space Research Center of the Polish Academy of Sciences and Astronika in Poland and Spain's Centro de Astrobiología supplied the wind sensors.