Virat Kohli surpassed Australia’s Don Bradman to create the record of scoring the most number of 150 plus scores as a captain in international cricket.

Virat Kohli has become the first Indian captain to score 40 hundreds after he completed his 26th test century during India’s second test match against South Africa at the Mumbai Cricket Association Stadium in Pune.

Virat Kohli achieved the feat in the 109th over of Indian innings on the second day of the second test match between India and South Africa. He now has a total of 26 centuries in just 81 test matches.

• Virat Kohli with his knock of 254 not out (his 7th double century)now stands at the 53rd position in the list of all-time leading run-scorers in Test cricket. He pushed past veteran Indian cricketer Dilip Vengasarkar in the list.

• He also has the most runs now as Indian captain, surpassing Sunil Gavaskar, who held the record previously. 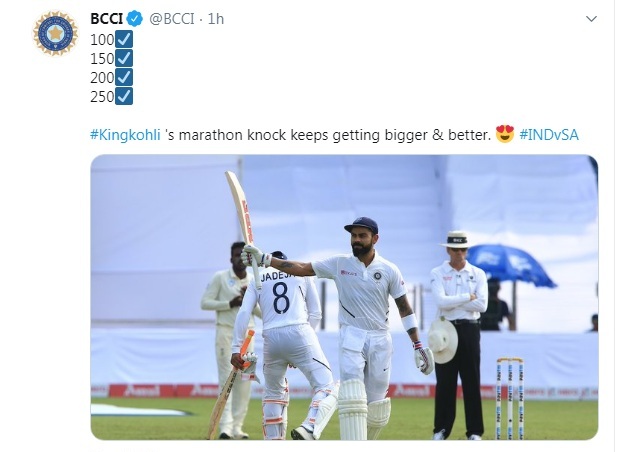 • Virat Kohli has also become the second Indian cricketer to captain India in 50 test matches, surpassing the Saurav Ganguly. MS Dhoni currently holds the record of leading the Indian side for the most number of Test matches. He has led India in 60 tests.

• Under Virat Kohli’s captaincy, India has had the most successful run in Test cricket with 29 wins from 49 matches. MS Dhoni had led India to 27 test wins from 60 matches.

• Virat Kohli also became the only fourth captain to score a century in his 50th match as captain. He joined New Zealand's Stephen Fleming, England's Alastair Cook and Australia's Steve Waugh in the feat.