What is the difference between Green Hydrogen and Blue Hydrogen?

As we know that Hydrogen is an odourless, and invisible gas. It is a clean fuel and produces only water when consumed in a fuel cell. There are various shades of hydrogen including blue, green, grey, yellow, etc. Why soo many colours are given to Hydrogen and what is the difference between blue and green hydrogen? Let us find out! 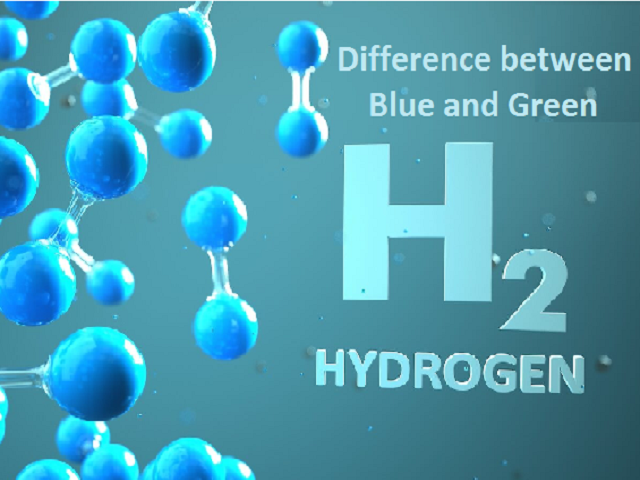 Hydrogen is said to be an energy carrier that can be used to store, move and deliver energy produced from other sources. It can be produced from various domestic resources like natural gas, nuclear power, biomass, and renewable power including solar and wind. Because of these qualities it is an attractive fuel option for transportation and electricity generation applications. It can also be used in cars, in houses, and in various more applications.

Worldwide, political will is building the vision of net-zero emission society. Europe wants to become the first net-zero continent and recently China has jumped on the net-zero bandwagon, targeting 2060.

But the necessity is lot more than that. In 2020, the sharp emissions reductions in COVID-19 occurred and it should be continued if we want to achieve the 1.5 degrees target.

It has been seen that wind and solar power have great cost reductions and are leading the decarbonisation charge at present.

- Also, wind and solar are variable and non-dispatchable that requires additional technologies to supply energy when there is little wind and sun and others are dedicated to consume excess of wind and solar power.

What is Neuralink? All about Elon Musk's new technology and it's uses

Let us tell you that the various names given to hydrogen-like yellow, grey, blue, green, etc. are not colours as discussed above that hydrogen is colourless gas but colours are due to the method of production of the gas.

Artificially, Hydrogen is first time produced in early 16th century by the reaction of acids on metals.

Henry Cavendish was the first to recognise that hydrogen gas was a discrete substance in 1766-81 and it produces water when burned. Also, the property for which it was later named i.e. in Greek hydrogen means "water former".

With the help of electrolysis also Hydrogen can be obtained.

Mostly hydrogen is used near the site of its production. The two largest uses are fossil fuel processing which is also known as hydrocracking and another is ammonia production, mostly for the fertilizer market.

In metallurgy, it is problematic because it can embrittle several metals due to which the designs of pipelines and storage tanks are complicated.

Hydrogen gas is also highly flammable. It forms explosives mixtures with air in concentrations from 4-74% and with oxygen from  4-94%.

The explosive reactions may be triggered by spark, heat and sunlight.

It has been said that clean hydrogen will play an important role in the world's transition to a sustainable energy future. It will help in reducing carbon emissions from industry and heavy transport and also provide long-term energy storage at scale.

Hydrogen is also a versatile energy carrier that can be produced from a wide range of sources and can be used in several ways across the entire energy sector.

No doubt, it could become a game-changer in its low-carbon form but its widespread adoption faces challenges.

Difference between blue and green hydrogen

As we know that hydrogen is a clean fuel. Brown hydrogen is formed through coal gasification. Production of grey hydrogen from natural gas throws off carbon waste. That is its production results in the production of large volumes of carbon dioxide.

Blue hydrogen is cleaner version for which the emissions of carbon are captured and stored, or reused. On the other hand, green hydrogen is produced through electrolysis which is a process of separating water into hydrogen and oxygen.

As per December 2020 report by the International Renewable Energy Agency, today, green hydrogen is 2 to 3 times more expensive than blue hydrogen.

In the next several years, it is expected that the cost of green hydrogen will decrease with improved electrolysis technology and the scaling up of that technology to industrial levels of production.

The prediction of IREA is that green hydrogen could be produced for between 8 cents/kg and $1.6/kg in various parts of the world before 2050.

Therefore we can say that Blue hydrogen is produced when natural gas is split into hydrogen and carbon dioxide either by Steam Methane Reforming (SMR) or Auto Thermal Reforming (ATR) but the carbon dioxide is captured and then stored. Through Carbon Capture Usage Storage (CCUS), the 'capturing' is done.