Teaches'Day is celebrated on 5 September every year in India to pay tribute to the renowned teacher Dr. Sarvepalli Radhakrishnan. Whole country celebrate his birthday as Teacher's Day with full enthusiasm. He was a great philosopher who introduced western philosophies into Indian thought. Popularly he became the nation's teacher. He was the first Vice-President and second Ppresident of India. His contributions in the field of education and also as a political leader are unforgettable. His works and achievements have inspired many youths. Let us read more about Dr. Sarvepalli Radhakrishnan.

Dr. Sarvepalli Radhakrishnan was a great philosopher, statesman, the second President and the first Vice-President of independent India. He was a prominent scholar and academician. His birthday (5 September) is celebrated as Teachers Day in India. No doubt his achievements and works have inspired several youths of India and so, he became the nation's teacher. Let us study about his achievements, contributions and some unknown facts about him.

1. When he had completed his school education, Radhakrishnan's father wanted him to become a priest at a temple rather than to study further. But he worked hard to win a scholarship from the Madras Christian College that enable him to pursue his graduation and passed his BA with first class honours in 1906. Do you know that he wanted to pursue his post graduation in Science but he got free textbooks of philosophy subject from his cousin so, he had completed an MA in philosophy and wrote some books also?

2. Sarvepalli Radhakrishnan was invited to take the post of a Professor of Mental and Moral Science by the Vice-Chancellor of the Calcutta University. He interacted closely with Rabindranath Tagore in Calcutta. He was deeply impressed by the Nobel Laureate's philosophy and chosen to write his first book on him. He had also delivered lectures at the Manchester College and the Haskell at Chicago. He also served as the Spalding Professor of Eastern Religions in the Oxford University for three years. 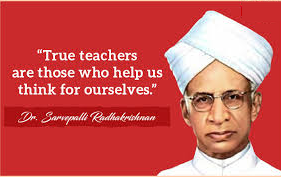 3. He became Vice President of India in 1952 and before it, he was appointed as the ambassador to the UNESCO in 1946 and then to the Soviet Union. He laid the foundation of India’s relationship with the Soviet Union (now Russia). He was sent as India's second ambassador to Moscow in 1949-53 at the time of the Cold War. There he managed positively India's relationship with the Soviet Union. During the meeting Stalin said that it takes two hands to clap and that there was another side responsible for the Cold War too. Then, Radhakrishnan replied "As a peace-loving country, the Soviet Union should withdraw its own hand as it takes two hands to clap".

Why Teachers' Day is celebrated on 5 September?

4. He was elected as the President of Republic of India in 1962. When he was appointed as the President of India he was welcomed by Bertrand Russel. Do you know that when he became President, some of his students requested him to celebrate his birthday then he replied "Instead of celebrating my birthday, it would be my proud privilege if September 5 is observed as Teacher's Day". Since then his birthday has been marked as a day to commemorate the contribution of teachers in our lives.

5. American educator Paul Artue Schillip called Radhakrishnan 'a living bridge between the East and the West' because very gracefully he had interpreted Indian thought in western terms. He proved to the World that Indian thoughts have reasons and logic. 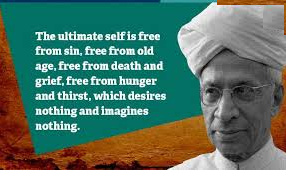 6. His name was nominated for the Nobel Prize in Literature for five consecutive years. But he never won the Nobel Prize. He won several other prestigious awards and titles including Bharat Ratna in 1954, a knighthood from George V in 1931 and an honorary membership of the British Royal Order of Merit in 1963.

7. When he was appointed as a bachelor-at-arms in 1931 due to his in-depth research, data and his services. However, he ceased to use the title 'Sir' and embraced his academic title 'Doctor'.

8. In 1975, he won the Templeton Prize for promoting the notion of "a universally reality of God that embraced love and wisdom for all people". Do you know that he had donated his entire prize money to the Oxford University? And in the memory of the Dr. Radhakrishnan Oxford University has set up a scholarship known as "Radhakrishnan Chevening Scholarship".

9. One more astonishing fact about him is that after becoming the President of India, he remained a humble man. He only accepted Rs 2500 out of his salary Rs 10,000 and donated the remaining amount to the Prime Minister’s National relief Fund every month.

10. He had also formed the Krishnarpan Charity Trust along with Ghanshyam Das Birla and some other social workers in the pre-independence era.

Therefore, we can conclude that Dr. Sarvepalli Radhakrishnan was a great teacher, person and successfully leaded India in tough times. When he became the President, India was fighting wars with China and Pakistan. He had won several titles and prestigious awards. He was the ambassador to UNESCO and received the Bharat Ratna. Earlier, he was also the vice chancellor of Andhra University and Banaras University.

“Tolerance is the homage which the finite mind pays to the inexhaustibility of the Infinite”.

“The end-product of education should be a free creative man, who can battle against historical circumstances and adversities of nature”.